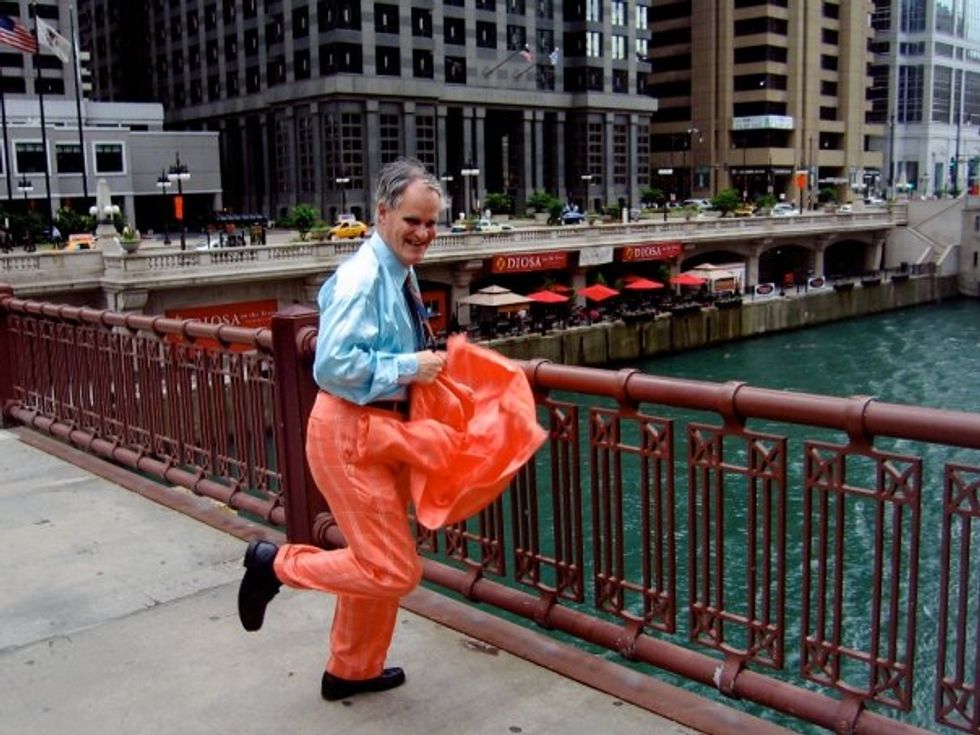 Sure, you've only got eight days of Christmas shopping left, but rather than subject yourself to the bustle of the department stores, take refuge in a theater. Happy holidays!

1. Vincent: A Life in Color
Where:Red Vic Movie House, 1727 Haight St., 415-668-3994
When: Dec. 16
Why: Who is Vincent P. Falk, the middle-aged gentleman with the colorful (some might say garish) suits who makes a point of dazzling Chicagoans with his irreverent attire? First-time documentarian Jennifer Burns asked the same question, and the result of her fact-finding is A Life in Color, a fascinating journey into the improbably "normal" life of a man long dismissed by most as a kook. (His fashion taste remains highly unusual, however.)

2. TRON: Legacy
Where:Castro Theatre, 429 Castro St., 415-621-6120
When: All Week
Why: The 1982 original, so prophetic in its fascination with the computer generation, would seem an obvious choice for a follow-up, and perhaps there is no better time than now, when technology has almost caught up with the vivid imaginations of creators Steven Lisberger and Bonnie MacBird. Nearly three decades later, Legacy is a marvelous spectacle and a worthy sequel – sometimes convoluted but hard to resist, its sense of wonder dazzles. Flynn lives, and we’re grateful for it.

3. The King's Speech
Where: Embarcadero Center Cinema, 1 Embarcadero Ctr., 415-352-0835
When: All Week
Why: Colin Firth (A Single Man) should land himself at the forefrunt of a second consecutive Academy Award race with his funny, moving and linguistically challenging performance as Bertie, the tongue-tied son of King George V whose ascent to the throne is complicated by his stammer. Enter Lionel Logue (Geoffrey Rush, also Oscar-bound), an unconventional speech therapist who pushes Bertie to realize his potential and becomes his best friend in the process.

4. Sita Sings the Blues
Where:Red Vic Movie House, 1727 Haight St., 415-668-3994
When: Dec. 23
Why: Alternative cartoonist and onetime San Francisco resident Nina Paley is officially on a roll. Following the abrupt dissolution of her marriage – her ex ended it via e-mail – she began exorcizing her frustrations through a series of animated shorts inspired by the Indian tale of Ramayana and set to the vocals of 1920s jazz legend Annette Hanshaw. Now comes the feature-length fruit of her labors – Sita Sings the Blues, a profoundly personal work of visual brilliance that returns this week to the Red Vic as an early Christmas present.

5. The Nightmare Before Christmas
Where:Red Vic Movie House, 1727 Haight St., 415-668-3994
When: Dec. 21-22
Why: When Halloween's Pumpkin King discovers Christmas Town – home to "Sandy Claws" – he decides to grab Santa’s reins and deliver toys to children all over the world. Can Christmas be saved? Nightmare, a handsome, delightfully dark stop-motion animation, is the kind of holiday classic only director Henry Selick (Coraline) and Tim Burton (conceived and produced) could concoct.

6. Fair Game
Where: Embarcadero Center Cinema, 1 Embarcadero Ctr., 415-352-0835
When: All Week
Why: Doug Liman (The Bourne Identity) treats Valerie Plame’s saga more as a harrowing personal odyssey than as a case of no-holds-barred partisan politics in his new thriller, starring Naomi Watts as the ex-CIA officer whose cover with the agency was blown as the result of a White House leak. Jez and John-Henry Butterworth's screenplay stops short of implicating former Vice President Dick Cheney, whose personal chief of staff was ultimately identified as the source of the leak, but Fair Game's resistance to finger-pointing never dulls its considerable impact.

7. Made in Dagenham
Where: Embarcadero Center Cinema, 1 Embarcadero Ctr., 415-352-0835
When: All Week
Why: The working-class women of Dagenham, an east London suburb, achieved lasting social change in the 1960s by fighting for equal rights and pay at the Ford car plant where even the grandmothers were referred to by their male supervisors (and pretty much everyone else) as factory "girls." Nigel Cole's feel-good fantasy, inspired by those real-life events and starring Happy-Go-Lucky's Sally Hawkins, is predictable but supremely entertaining nonetheless.