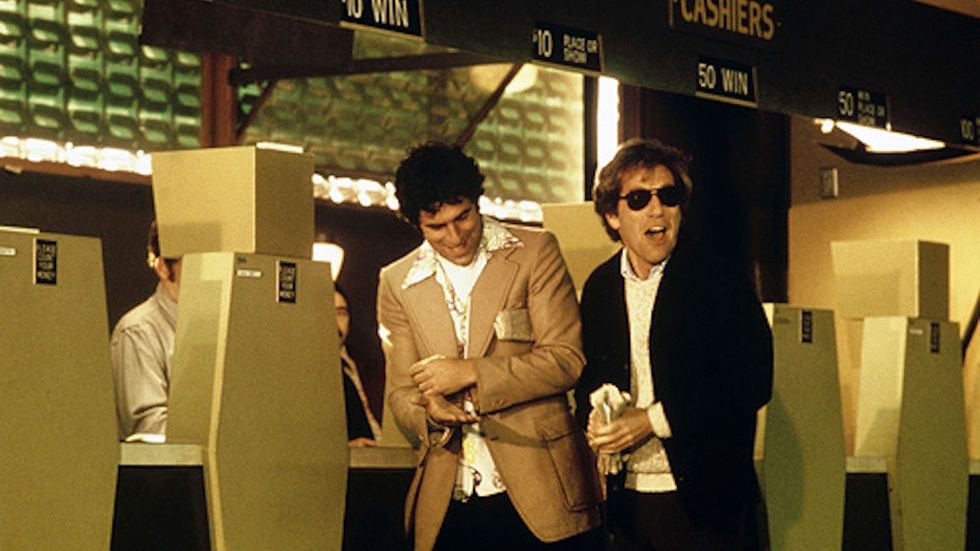 Reluctant to buy into the Moneyball hype? Not a problem. There is no shortage of worthy alternatives to be found this week in the city, including the San Francisco Irish Film Festival (playing through Sunday at the Roxie) and these fine offerings:

1. The Long Goodbye
Where:Castro Theatre, 429 Castro St., 415-621-6120
When: Sept. 28
Why: Elliott Gould headlines a double feature of overlooked Robert Altman gems, playing hard-luck detective Philip Marlowe in the director's offbeat 1973 adaptation of the Raymond Chandler novel, and following that with another starring turn (opposite a cheerfully desperate George Segal) as a gambler resigned to a lifelong losing streak in California Split (1974). More popular offerings like M*A*S*H, Nashville and The Player tend to dominate any discussion of Altman's greatest hits, but these two have their place in the conversation.

2. Pearl Jam Twenty
Where:Balboa Theatre, 3630 Balboa St., 415-221-8184
When: All Week
Why: Cameron Crowe's colorful documentary recalls the years leading to the Seattle quintet’s formation, their overnight rise to stardom on the heels of 1991's Ten, and their deliberate retreat from the MTV spotlight. Drawing on more than 1,200 hours of rarely and never-before seen footage spanning the life of the band, Twenty offers a definitive portrait of Pearl Jam, on and off the stage where their star continues to shine brightest.

3. Farmageddon
Where: Roxie Theater, 3117 16th St., 415-863-1087
When: All Week
Why: Kristin Canty’s quest to find healthy food for her children is chronicled here as an educational odyssey, in which the filmmaker investigates why access to organic produce is being threatened nationwide. What she discovers, to her dismay, are misguided policies that favor agribusiness and factories over family-operated farms selling fresh foods to their communities. Meet Canty and a panel of local chefs, who will participate in post-screening discussions, this week at the Roxie.

4. Red State
Where:Balboa Theatre, 3630 Balboa St., 415-221-8184
When: Sept. 25
Why: KevinSmith will hosttwo Sunday screenings of State, his blood-soaked indictment of religious fanaticism and all-around hypocrisy, via live interactive broadcast from the New Beverly Cinema in Los Angeles, rapping with fans and critics alike after each show. The movie, a sufficiently tense diversion starring John Goodman, Melissa Leo and Michael Parks, premiered at this year's Sundance Festival, where Smith pre-empted a potential bidding war by buying his own movie for $20 and announcing plans to distribute it himself.

5. Connected
Where: Embarcadero Center Cinema, 1 Embarcadero Ctr., 415-352-0835
When: All Week
Why: Have you ever faked a bathroom break to check your e-mail? Slept with your laptop? Or become so overwhelmed that you just unplugged from it all? In her feature-length debut, Webby Awards founder Tiffany Shlain invites viewers on an exhilarating journey to discover what it means to be connected in the 21st century. Here, Shlain’s complicated relationship with technology serves as the springboard for a thoughtful exploration of modern life and our digital future.

6. The Little Mermaid Sing-Along
Where:Castro Theatre, 429 Castro St., 415-621-6120
When: Sept. 23-25
Why: Laurie Bushman and Leigh Crow host three nights of Disney nostalgia at the Castro, where patrons will gather to belt out the award-winning songs of Alan Menken and the late Howard Ashman. All comers will receive complimentary goody bags, with special prizes reserved for those sporting the best Mermaid-themed costumes. (Two words: shell bra.)

7.Detective Dee and the Mystery of the Phantom Flame
Where: Embarcadero Center Cinema, 1 Embarcadero Ctr., 415-352-0835
When: All Week
Why:A bizarre murder mystery brings together the soon-to-be-Empress Wu Zetian (Carina Lau, of 2046) and a once-exiled detective (Andy Lau) at the infamous Imperial Palace. Hoping he will solve the crime before her coronation, Wu implores him to rescue her dynasty. Director Hark Tsui (Seven Swords) teams with acclaimed stunt director Sammo Huang in this epic thriller inspired by the true story of one of the Tang Dynasty’s most beloved officials.﻿

3 Places to Ride Horses on the Beach in Northern California