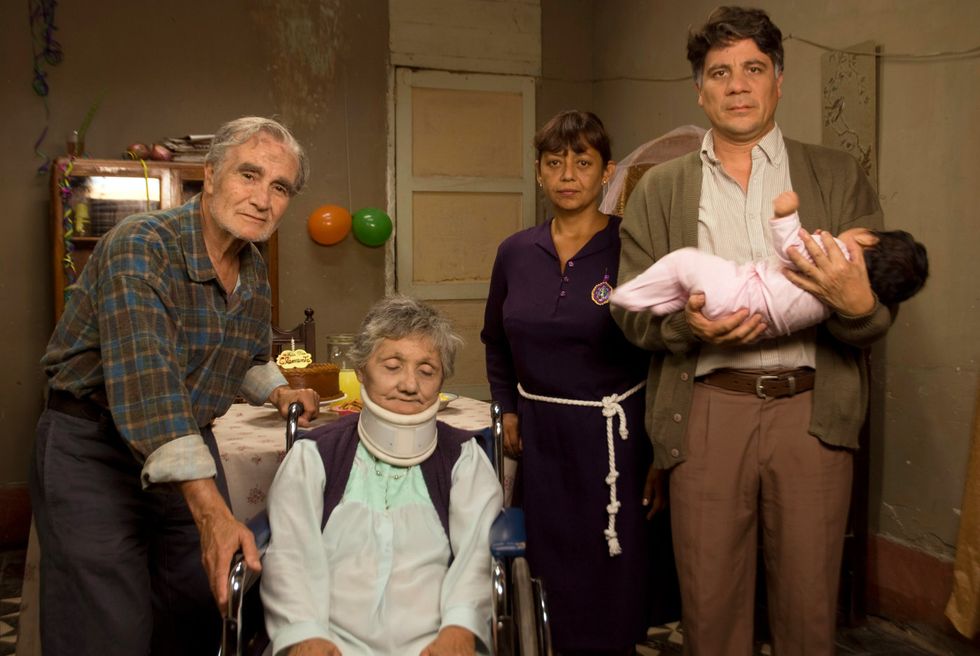 The San Francisco Film Society's Cinema by the Bay honors the passion, innovation and diversity of Bay Area filmmaking, the intelligence and probing spirit of local directors, and the incredible depth and breadth of America’s film and media frontier. The four-day festival kicked off Thursday with Joshua Moore’s heartfelt debut, I Think It's Raining, and will close Sunday at the SFFS-New People Cinema on Post Street with the Film Society’s annual celebration of local innovators, Essential SF.

1. Octubre
Where:SFFS-New People Cinema, 1746 Post St., 415-525-8600
When: Nov. 7-9
Why: As the neighborhood moneylender, Clemente (Bruno Odar) has no friends, only clients. He's a regular at the local brothel, even having fathered an infant with one of the prostitutes. When the child is quite unexpectedly entrusted to his care, Clemente's life is thrust into chaos. An award-winning crowd favorite at last year's Cannes Film Festival, Daniel and Diego Vega Vidal's lightly amusing character drama is a rich portrait of a brusque and graceless man who discovers there's more to life than collecting coin.

2.Revenge of the Electric Car
Where: Embarcadero Center Cinema, 1 Embarcadero Ctr., 415-352-0835
When: All Week
Why:In 2006, thousands of new electric cars were deliberately destroyed by their manufacturers. Today, less than five years later, the electric car is back with a vengeance. In Revenge, Who Killed the Electric Car? director Chris Paine takes his crew behind the closed doors of Nissan, GM and the Silicon Valley start-up Tesla Motors to chronicle the story of the global resurgence of electric cars. Without using a single drop of foreign oil, this new generation of car is America's future: fast, furious and cleaner than ever.

3. Annie Hall
Where:Castro Theatre, 429 Castro St., 415-621-6120
When: Nov. 9
Why: Winner of four Academy Awards including Best Picture, Annie Hall may be Woody Allen’s most universally acclaimed film, an amusing but, at the time of its 1977 release, uncharacteristically serious-minded departure from screwball comedies like Sleeper and Bananas. Allen has since written many tales of bittersweet, doomed-to-failure romance, but few as deeply personal or affecting.

4.Take Shelter
Where: Lumiere Theatre, 1572 California St., 415-885-3201
When: All Week
Why:Jeff Nichols' follow-up to Shotgun Stories (1997) is moody, riveting entertainment. It is the story of a marriage put to the test, an illustration of how trust is gained, how compromises are required, and how sometimes the best thing you can do is cast your judgments aside and listen with an open mind. As a dark fantasy, it is terrifying enough; as a drama about the powerlessness of a young family to stay afloat against a rising tide of bills and calamities beyond their control, it is a powerfully affecting experience not soon forgotten.

5.Drive
Where: Bridge Theatre, 3010 Geary Blvd., 415-751-3213
When: All Week
Why:In Drive, Ryan Gosling remains preternaturally calm even as he stomps a mobster’s flunky to a bloody pulp. Rarely does his voice rise above a whisper. He’s not an obvious choice to follow in Steve McQueen’s footsteps, perhaps because he, like his character, seems too cerebral to accept the brutishness the job requires. Yet Gosling, meticulously calculating in the few words he lets slip, is the perfect complement to director Nicolas Winding Refn’s seductive pulp fiction, in which the best-laid plans invariably unravel and the only way to survive the world is to embrace its darkness.

6. Plan 9 from Outer Space
Where:Roxie Theater, 3117 16th St., 415-863-1087
When: Nov. 8
Why: Ed Wood’s 1959 magnum opus, about grave robbers from outer space who descend on earth with dastardly intent, remains one of the most beloved cult classics of all time. What the movie means – if anything – is left entirely to the viewer's discretion. Playing as the final act of Tuesday's loving, three-part tribute to the late auteur, whose Jail Bait (1954) and Glen or Glenda? (1953) will also be featured, Plan 9 is bizarre, unintentionally uproarious and highly entertaining.

7.The Man Who Fell to Earth
Where: Castro Theatre, 429 Castro St., 415-621-6120
When: Nov. 10
Why: Space oddity David Bowie travels to earth from a drought-stricken planet, seeking sustenance for his ailing alien civilization. His otherworldly grasp of technology makes him rich, thrusting him headlong into the culture of American decadence, symbolized here by booze, sex and TV. Bowie's big-screen debut, now celebrating its 35th anniversary, arrives at the Castro featuring 20 minutes of pristine footage cut from its original U.S. release.