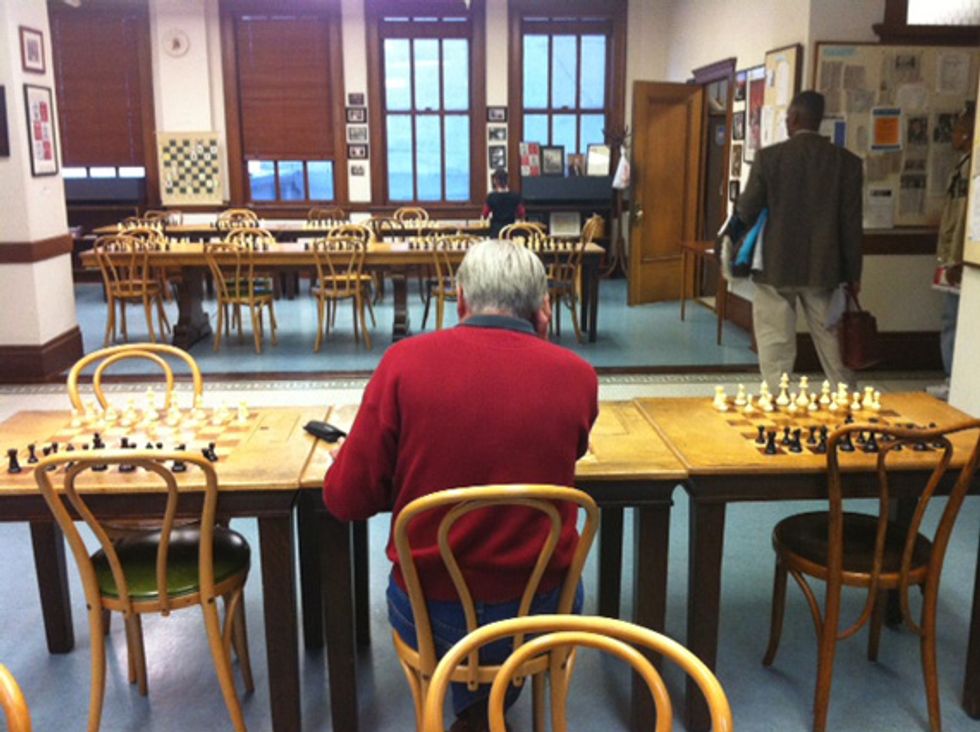 Hidden away in the Financial District is the oldest continuously-operating chess club in the United States, inside the Mechanics' Institute Library on Post Street. Since 1854, players have climbed the gorgeous marble spiral staircase to the fourth floor to play at the club. And still today, in the late afternoons and early evenings, the club is filled with passionate players poring over wooden chess tables that date back to 1914. The walls are covered in framed photos of notable members and dozens of world chess champions who have paid the club visits over the years.

And it's not all stuffy neck ties, canes, and cigar smoking (although there used to be quite a lot of that). Tuesday nights they host a weekly tournament, where players of all ages come out for marathon games that last until 10:30 pm. And they offer free classes for kids and beginners on Saturday and for women on Sundays. Become a member, and you can play till your heart's content every weekday until 9 pm, and most importantly, learn to kick ass at the game.

As it is, chess has managed to mystify humans for several millenia. As world champ Alexander Alekhine once said: "Chess is the master of us all".

"There's no human being who plays remotely close to perfectly, so there's always room to learn something new," says John Donaldson, the Mechanics' Institute's Chess Director. Comparing it to classical music, math and even certain types of art, he feels the more you know about it, the more you appreciate it on different levels and realize there is still more to find out.

We chatted with Donaldson to find out more about just what goes on in these hallowed halls. He's been director since 1998, and is an internationally-ranked chess player. Here's what he had to say:

While you've worked here, have any chess legends come through and played?
Boris Spassky, who played the famous match with Bobby Fischer,  came here in 2007. Anatoly Karpov, who received the world champion title after Fisher, has been here too. In fact all the world champions from Emanuel Lasker, who was the first world champion to visit our club in 1903‚ through the champion in 2000, have visited the club, including Bobby Fischer in 1964. The only two we're missing is Garry Kasparov and Mikhail Botvinnik who'll we'll need a seance to host!

Here, Donaldson holds a framed photo of champion Alekhine at the chess club in the 1920s playing 32 people at once.

What's your favorite part about working here?
Getting to do what you love to do is always pleasant and getting paid for it is even better. I'm a chess player so getting to be around chess is always good, and I get to play almost every day. Also I like the building a lot. I think it's one of the more beautiful buildings in SF. Most of the tables we have here at the club are from 1914, and you can see that the Antiques Roadshow has not gotten to them! They haven't been refinished or anything.

I'm very intrigued by the fact that you have women-only classes on Sundays. Can you tell me about those?
Well, I think you'd really enjoy it! The woman who teaches it, Ewelina Krubnik came up through the ranks here and just graduated from SF State. So she's in her early 20s. There are grandmothers in that class, there are 8 year olds, and all ages in between. If you look at the way chess works in the US, genders are well represented but by high school, usually the only women who are playing are the ones who are really established. That's because societal pressures are such that it's not considered a "normal" activity for young ladies to play. So the idea of this class is that it can be a supportive environment for them to learn. We want everyone to be comfortable here and develop at their own pace.


What do you say to people who are intimidated by chess?

Well one thing is, if you look at the US Chess Federation, there's maybe about 100,000 members, of which over half of them are under 18. So there are a lot of kids who play. But the number of Americans who know the rules of the game — maybe they play once or twice a year with their grandfather — is more like 50 or 100 million. But the number is rising because of the Internet. A lot of chess clubs have died from that. It's a blessing and a curse. More people play online because they can play 24/7 with people from all over the world and there's no face-to-face so they don't feel so intimidated. But on the other hand, they miss out on the social element. This club is unusual because people can meet face-to-face to play.

Do you ever go down to Market Street and play?

I make a good enough salary here, I wouldn't need to supplement it there. It's always kind of a tricky situation because chess isn't a game of chance, so it shouldn't be a matter of gambling.

Do they ever come here?
Some do when it rains. Most of the players there are not tournament players, most are casual players, but very enthusiastic, and quite good. There's one fellow Jorge Lopez, he's by far the strongest there and he plays here sometimes. He is a master level player and he's royalty there.

Can you tell us about chess etiquette, for those who want to come and play?
Typically when players play, they'll shake hands before and after the games, and they're expected to be polite towards each other. And often times when you play in tournaments, which is different from playing with friends, if you touch a piece, you have to move it. If you're on 5th and Market, those guys will have good-natured banter, but here on Tuesday night tournaments, it's dead silent.