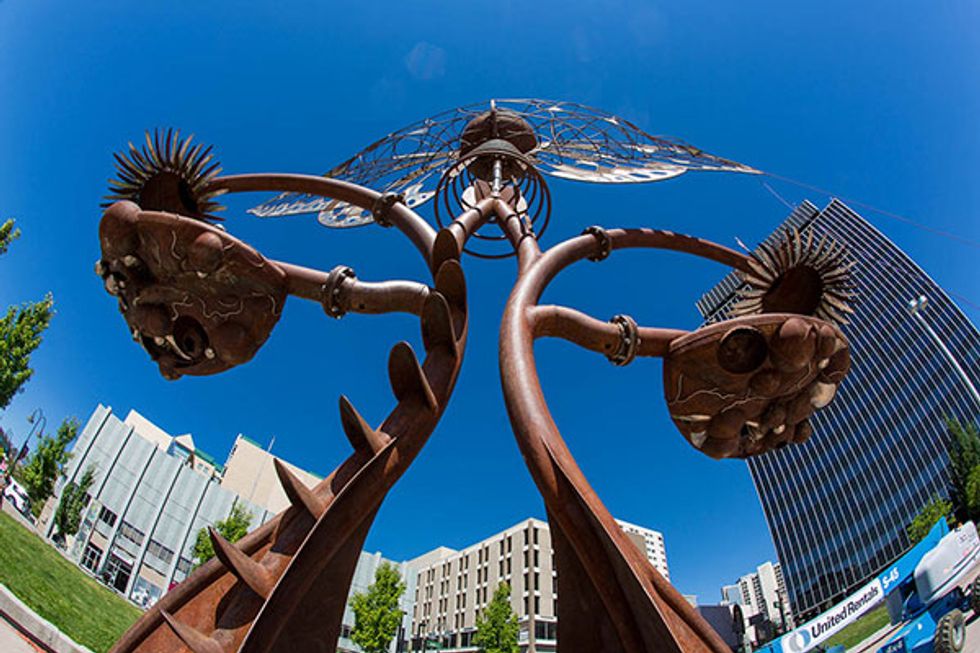 Is Reno Poised to Become a Culture Capital?

Reno isn’t called Artown for nothin’. The city mostly known for its gaming is blooming with Burning Man sculptures, murals, Broadway musicals, and bluegrass music. The Nevada Museum of Art and its Center for Art + Environment was recently awarded a 2014 TripAdvisor Certificate of Excellence and will soon have one of the best views in Reno from its new Sky Room. Art in all its forms is now woven through the fabric of the city in unexpected ways.

This year marks the 20th anniversary of this visual and performing arts series held during the entire month of July. The festivities kick off on opening night with the MarchFourth Marching Band, and performances throughout the month will feature musical groups Rising Appalachia, Las Cafeteras, and Mary Chapin Carpenter. Every day is jam-packed with family events, art walks, movies at Wingfield Park by the river, drum circles, and theatrical productions. Many of the events are free and held downtown in churches, art galleries, and wine bars.

The first annual Reno Sculpture Fest recently featured larger than life art by various Burners and artists like Android Jones, Matt Schultz, Jeff Shomberg, and Aric Shapiro, several of which have been permanently placed in areas around the city, including “Guardian of Eden” at the Nevada Museum of Art and Bryan Tedrick’s "Portal of Evolution" — the female reproductive system topped by a spinning butterfly.

It seems like each week a new mural magically appears on the side of a building, quickly transitioning Reno into "Muraltown," with works by artists like Erik Burke, Angelina Christina, and other local muralists painted on the sides of the Whitney Peak Hotel, parking garages, hair salons, bars, and restaurants.

Smaller works of art may be harder to find—unless you ride a bike through town. Numerous bike racks shaped like trains, dogs, fish, and children's toys dot the areas around downtown and Midtown.

After a day of visual art, nights in Reno come alive with music that ranges from riverdance and ragtime at the Pioneer Center for Performing Arts to Music on the Porch at the Mountain Music Parlor—a restored home from 1906 that offers lessons, jam sessions, and special concerts on traditional American music. The Reno Chamber Orchestra features guest artists like Francesca Dego in an intimate setting, and Sierra Water Gardens has live music on Saturday nights in their Zen-like pond garden by the Truckee River. Cargo at Whitney Peak and the Knitting Factory hold concerts by Sebastian Bach and the Glitch Mob.

READ MORE: If you're headed to Reno, also check out the mountain town's emerging craft cocktail and micro-brewing scene, here.