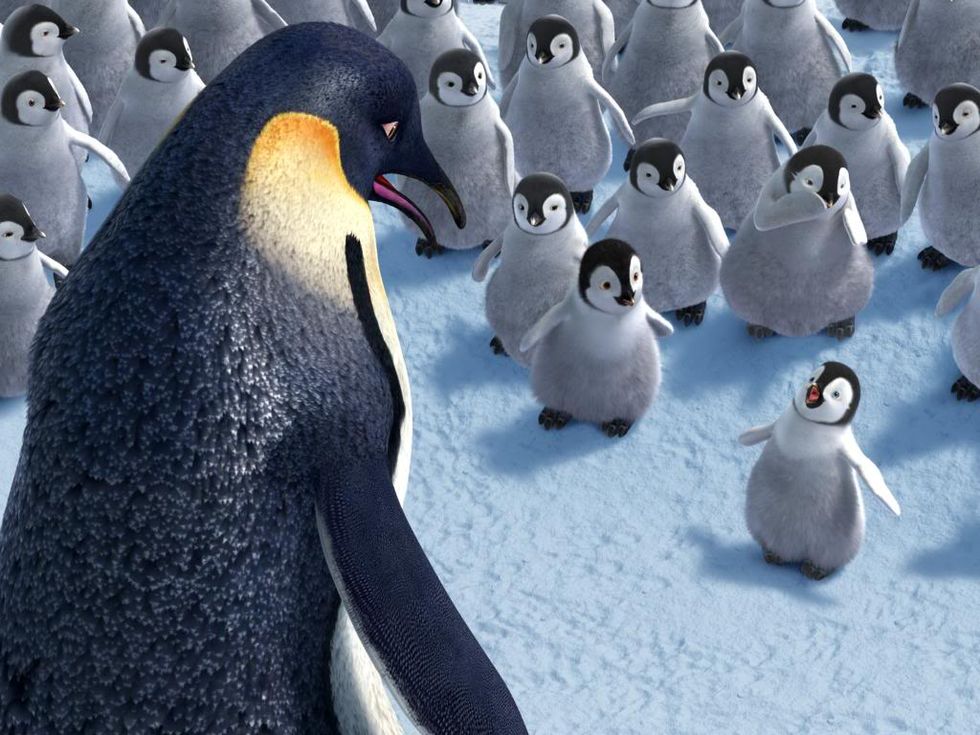 Considering the recent flurry of furry misadventures – among them, Over the Hedge, Flushed Away, Open Season and Ice Age: The Meltdown – 2006 has been a banner year for quirky, cuddly animals. Happy Feet, a late entry to the sweepstakes, is a cut above them all.

George Miller's long-awaited follow-up to Babe: Pig in the City (1998) is an animated fantasy of rare depth, a delightful combination of digital wizardry and thoughtful, provocative storytelling. Rather than condescending to the children who comprise the bulk of its demographic, it challenges them with a smart, compelling plea for environmental awareness, framed within the context of a bubbly musical comedy.

Anyone expecting the standard litany of pop-culture references and hokey one-liners will not find them here. Yes, the movie is loaded with song-and-dance numbers inspired by pop heavyweights including Prince, DMX and Elvis, but they’re rarely intrusive — if anything, they're integral to the story.

Mumble (Elijah Wood) is a young emperor penguin who can’t carry a tune. Because singing is an important part of the penguin mating ritual, Mumble’s parents fear he will spend his days alone.

It’s a legitimate concern. Mumble is friendly and fearless, but without a song to call his own, he remains an outcast. He tries to win over lovely Gloria (Brittany Murphy) with his furious tap-dancing (hence the nickname, "Happy Feet"), but the other penguins mock his fancy footwork, and Gloria remains unstirred.

Soon enough, he discovers a different way to make an impression. Thanks to the "aliens" – human industrialists who are polluting the waters surrounding Antarctica and scooping up the fish that represent a vital food source – the penguins are going hungry. Mumble vows to track down the root of the problem.

The story of a well-meaning outsider struggling for acceptance is familiar, particularly in children's fables, but taken on its own terms, Happy Feet is as powerful and heartfelt an appeal for environmental responsibility as An Inconvenient Truth.

Everywhere Mumble goes, pollution abounds – garbage carelessly dumped in the sea, a plastic six-pack casing choking the life out of one unfortunate penguin, voiced by Robin Williams. Worse yet, massive fishing liners are compromising the balance of nature, endangering the creatures that make Antarctica their home. When Mumble demands to know why, the simplicity of his very sensible plea evokes no small heartache.

Directed and co-written by Miller, whose equally somber Pig in the City stands as one of the great, overlooked movies of the '90s, Happy Feet ultimately takes an optimistic tone, gently hinting that the plight of the penguins is no lost cause. Yet the movie's portrayal of a world achingly oblivious to the welfare of its tinier inhabitants is troubling.

It raises hard questions, not just about environmental abuse but also about the ethical treatment of animals. At a time when so many animated fables seem content to fall back on technical proficiency and happily ever afters that ring hollow, it’s refreshing to find one with the substance and courage in its convictions to match its grand visuals.