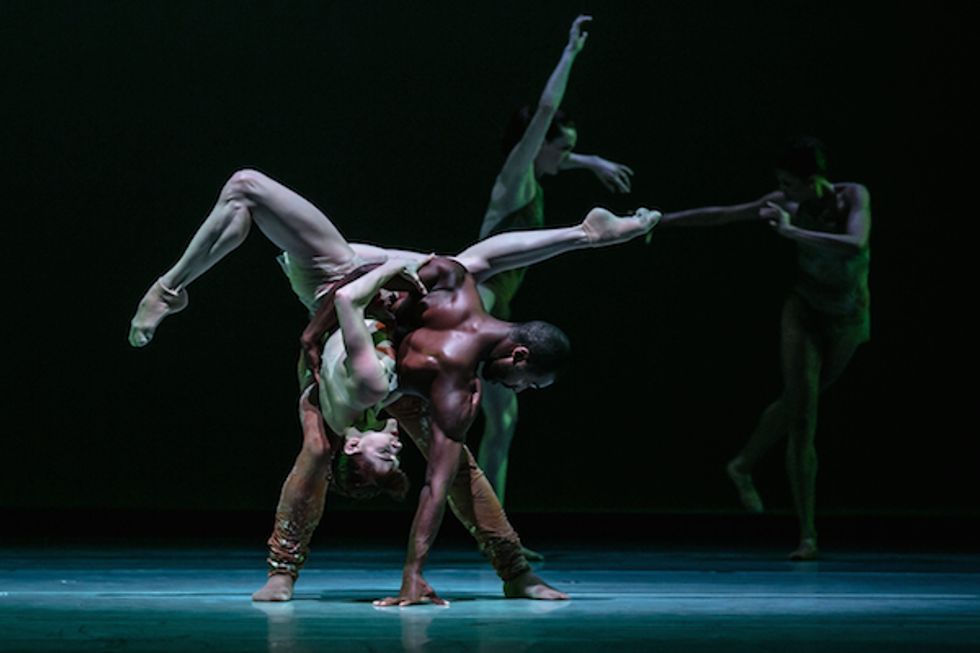 Lines Ballet Casts a Spell From Nature with "Biophony"

There is something ruthless about Alonzo King. King—who exudes the ease and innate savoir faire one associates with Duke Ellington—is the founder, choreographer, and force behind Lines Ballet, currently in the midst of its 2015 spring season at Yerba Buena Center for the Arts. The world premiere of Biophony, his collaboration with natural soundscape artist Bernie Krause and composer Richard Blackford is a stunning, moving, and, at times, frightening testimony to navigating the pitfalls inherent in one of the scariest things an artist ever has to face: a really great idea.

In this case, that is placing a company of extraordinary dancers and their lithe, beautifully articulated infrastructures in the middle of a stage accompanied by a score teeming with the sounds of the natural world. Starting with a lone field cricket before segueing its way through herds of trumpeting elephants, fog-horning whales, buzzing insects, birds, and thunderstorms, the score drives the dancers through exhausting paces. With their limbs articulating, whirling, falling, and, most of all, extending, they face the task of interpreting and echoing the surrounding soundscape without a shred of sentiment or outright mimicry.

I have to admit, at one point I thought I wanted more. Specifically lighting – something complicated and dramatic perhaps? Something that would mirror the intensity of the sounds and music being generated in order to deliver some kind of even more immersive experience. And that’s when the notion of King being ruthless struck me. He and his collaborators—including the company’s consistently impressive creative director Robert Rossenwasser who also designed the costumes—resisted the temptation to cheapen the inherent drama of their creation by resorting to any well-worn trickery, however deft and satisfying it might be in the moment. Rather, they kept the attention where it belonged: on the dancers.

And what dancers they are. While Robb Beresford brought a certain Australian Ridgeback intensity to the proceedings, with his hairy torso and bounding sense of purpose, Portland native and Hawaii-raised Babatunji owned the floorboards with the confidence of a gymnast used to scoring perfect 10s. Kara Wilkes, Laura O’Malley, and Adji Cissoko displayed such superb athleticism and tenacious grace that I found myself looking for them when they weren't onstage.

The first half of the program began with live musical accompaniment. Beginning with some Handel to warm up the crowd, they then segued to Bach’s Concerto for Two Violins in D Minor, which provided the groundwork for an equally exquisite short series of dances. The performers, clad in what seemed like modest (yet sexy) swimwear from the '40s or '50s, were like jewels capturing light with each turn.

As I left the theater, Biophony followed me. I chose not to take BART, and instead walked up Market Street home toward the Mission and let the sounds and sights of the urban world duke it out with the wondrous buzzing in my brain. The urban world never stood a chance.