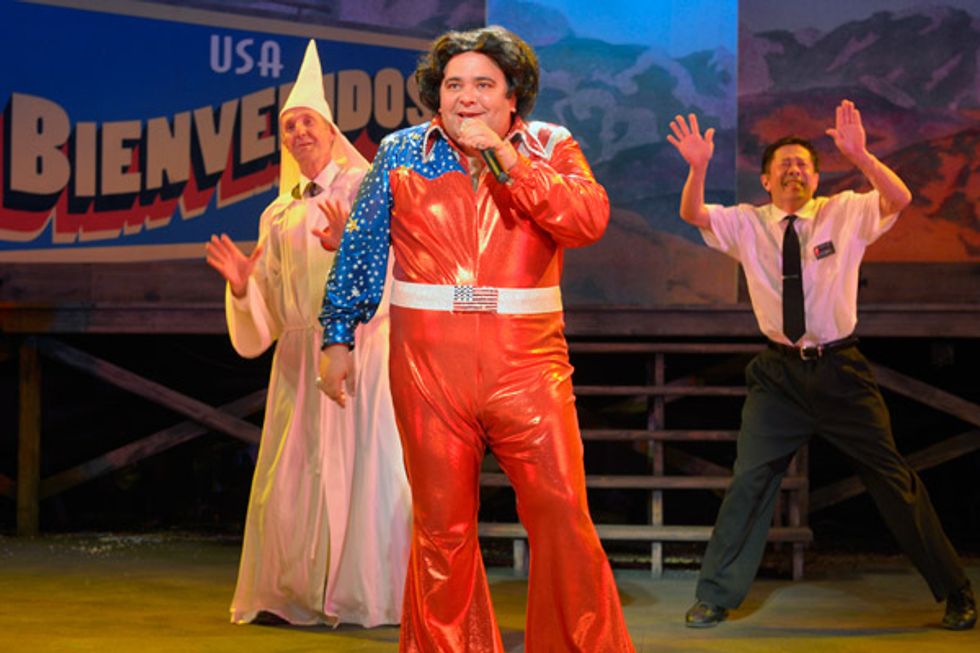 The season is winding down at the American Conservatory Theater, with its productions of Arcadia and Black Watch both set to close this weekend; and at the Magic Theatre, where the American premiere of Mark O'Rowe's Terminus closes Sunday as well. But across the Bay there is still stuff happening at Berkeley Rep and CalShakes, with the latter having just kicked off its summer season last week, and a small S.F. company is doing Sondheim's great fairy tale mashup, Into the Woods.

Down near Jackson Square, at the Eureka Theater, local company the Ray of Light Theatre is performing one of our favorite musicals, Stephen Sondheim's Into the Woods. Just last summer the Public Theater in New York did a star-studded revival of the show at Shakespeare in the Park, and as you likely know, it's a mashup of five fairy tales, all converging on a single forest: Cinderella, Rapunzel, Little Red Riding Hood, Jack and the Beanstalk, and (sort of) Thumbelina, in the form of a childless Baker and his wife who are granted fertility by a witch. For those unfamiliar with the musical, or Sondheim's work, suffice it to say it's far darker and emotionally engaging than that synopsis might suggest, and the music is some of the best ever written for the theater. Jackson at Battery, through June 29.

The first play in CalShakes' four-play season is somewhat of a departure for the company, which typically sticks to 19th and early 20th century classics when doing non-Shakespeare stuff. It's a newish work called American Night: The Ballad of Juan José by playwright Richard Montoya, developed by the group Culture Clash and  originally premiered at the Oregon Shakespeare Festival.

It's rollicking fever dream of a satire about immigration and the Mexican-American experience, and features a bevy of talented and versatile comedic performers in its ensemble. And, as always, the best part about going to CalShakes is picnicking in the grove beforehand and being able to carry your wine and picnic remnants right into the outdoor amphitheater with you. Wilder Road exit off of Highway 24, Orinda. Through June 23.

The excellent Dear Elizabeth, a play in letters by award winning playwright Sarah Ruhl, was extended and still has several weeks left, performing through July 7. The play is directed by Les Waters, a frequent collaborator with Ruhl who had previous hits at the Rep with Eurydice and In the Next Room (the vibrator play), and it's a stunning piece that is far more than the sum of its epistolary parts. It features just two actors, the talented Mary Beth Fisher and Tom Nelis, portraying poets and friends Elizabeth Bishop and Robert Lowell and reading from the pair's correspondence spanning thirty years. The unrequited love affair and intellectual friendship shared across continents is more engaging and powerful than you might expect, but it remains a mostly quiet piece that reminds us of the vitality and emotional depth of the lost art of letter writing.

And in a special presentation on the theater's Thrust Stage, through July 7, there's George Gershwin Alone, conceived and performed by Hershey Felder. Felder's one-man show explores the brief but prolific life of the composer through song, and biography, and comes to Berkeley after successful runs on Broadway and in London.  2025 Addison Street, Berkeley