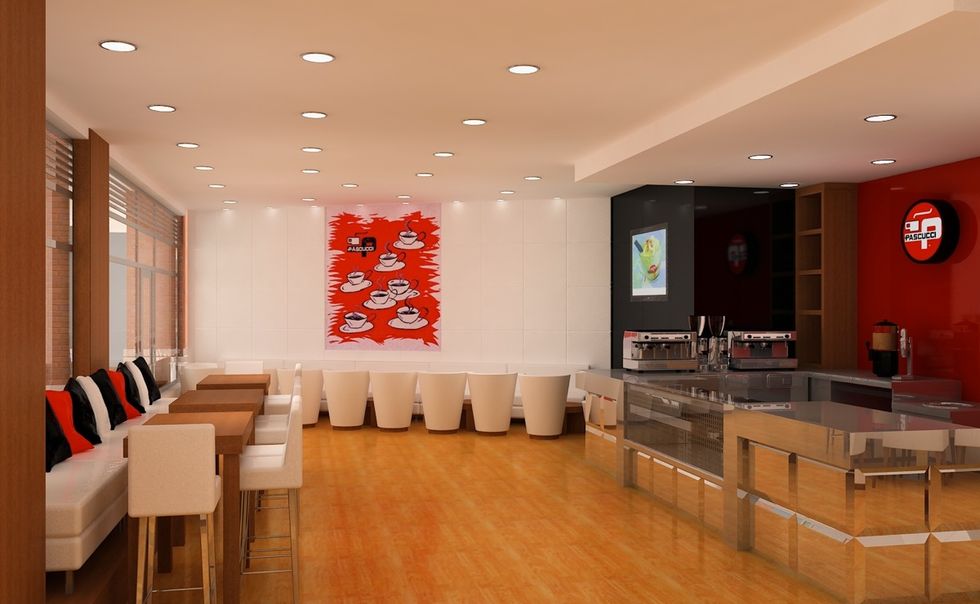 One of the world's best baristas is in town for the next few weeks, serving up shots under the watchful eye of Willie Mays. Eddy Righi, the 2010 runner up in the Italian Barista Championships is in San Francisco for the U.S. launch of Caffe Pascucci, a new cafe and eatery on King Street, directly across from AT&T Park.

Pascucci is an Italian powerhouse, with more than 100 locations throughout Europe and Asia, but the King Street location represents is first venture in the United States. The Pascucci family has been in the coffee business since the 19th century, when it began importing beans, and opened its first espresso bar in 1947. It's roasting operations are in Italy, and the espresso is very much in an Italian style. In addition to drink service it has a great-looking menu, designed by some of the same people behind Fish & Farm and Postrio.

Pascucci is in many ways the polar opposite of spots like Ritual or Four Barrel. Its menu boasts a massive variety of choices and options, with lots of unique beverages. There are literally dozens of drinks to choose from, most are espresso-based and very many are flavored and or frozen. It's definitely not a place for purists, but the drinks are delightful and the atmosphere is pleasant and inviting, with comfy white leather seats and plenty of tables. I had an espresso followed by a specialty beverage called a Paspuccio.

Righi's espresso was simple and elegant, served in a more traditional Italian style. (Not quite as thick and creamy as what seems to be en vogue currently in the United States.) It started and finished well, with a crema and flavor that is nearly the definition of a classic espresso. That's good news, as the espresso is the base for almost all of the drinks Pascucci serves.

But I get the feeling that espressos won't sell as well as some of the specialty drinks, like the Paspuccio I tried. That beverage was akin to a caramel latte, or perhaps a very wet cappuccino with cocoa and caramel, and it seemed typical of much on Pascucci's menu. It was decadent, and a gorgeous piece of art. I enjoyed it, but having said that, it's not exactly my regular cup of Joe.  But if you like sweetened or flavored espresso drinks, you're really, really going to dig this place.

On another note, if you're looking for something to do next week, head over to Berkeley for La Marzocco's Out of the Box Berkeley event. It will offer two full days of classes, workshops, and demos on the 18th and 19th, running from the morning into the night. Out of the Box is " free and open to all in the industry and friends." (If you're reading this, odds are you're a friend.) See the La Marzocco website for more details. It should be a blast; see you there.