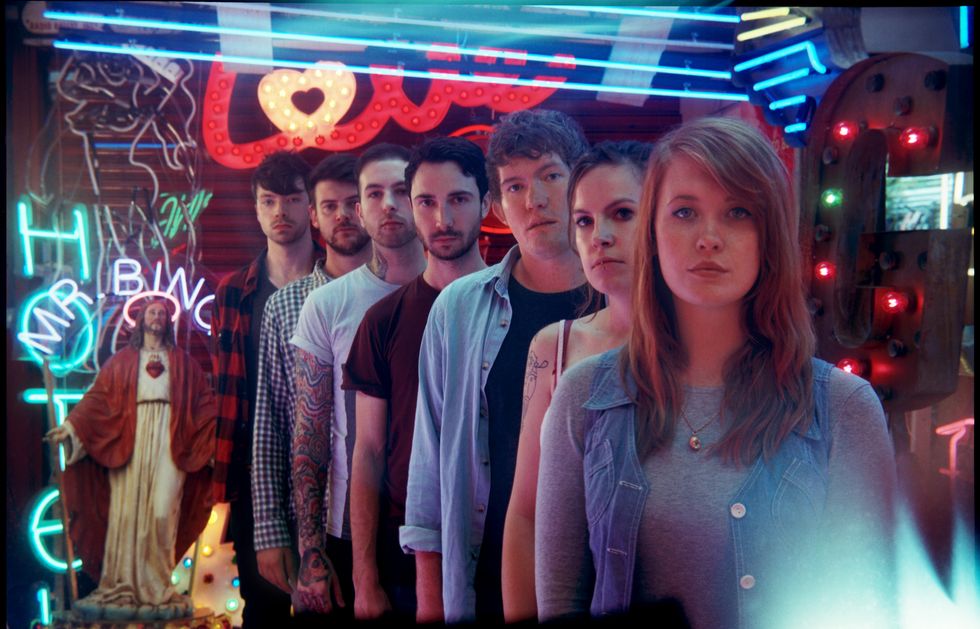 Los Campesinos! Conquering the World One Gig at a Time

When the seven musicians involved in Los Campesinos! sing in unison, the effect is jarring, like hearing an entire generation of 20-somethings speaking all at once. They seem to speak for a world of youths with an exuberance for life and honest expression and exclamatory punctuation, subtlety be damned.

The infectious yet carnage-minded pop punk outfit from Cardiff, Wales, plays Great American Music Hall Friday night, and fans will be bouncing off ornate pillars and singing along to the band's anthemic songbook if past gigs are any indication.

The band is currently touring in support of its 2011 album Hello Sadness, the latest caffeinated and well-articulated statement from lead singer Gareth Campesinos! and company (yes, all bandmembers have Campesinos! as their last name, like the Ramones). In a recent interview with 7x7, bassist Ellen Campesinos! said the album is a slight departure from past albums — 2010's Romance is Boring, 2009's We Are Beautiful, We Are Doomed and 2008's Hold on Now, Youngster are all required listening for pop punk junkies — given its relatively spare instrumentation and subdued pacing. But the hooks and earworms are still all over this album (start with "By Your Hand," 100% sugary sing-along material), as are Gareth's trademark diarist confessions.

The band recorded the album in Spain with the intention of creating something more direct and poppier than the hyper ADDcore approach of the aforementioned entries. One question that comes to mind while listening to their work is, how does the excitable nature of the music relate to the personality of the band? Are they as exuberant as their songs might lead us to believe?

Life in a sprawling seven-piece band means more niches within the context of the band and a greater division of labor. While Gareth is encouraged to focus on his songwriting, some of the bandmembers handle the merch, others the equipment, and Ellen Campesinos! puts together promotional DVDs and music videos (that's her behind the camera in "The Sea is a Good Place to Think About the Future").

"I just love to make things, and it's great to have a record of all this fun stuff we're doing, something to show my grandkids someday, that all of this actually happened," Ellen says.

Another thing that's on the record for Ellen is something she wrote for Nerve.com, about the, um, celibate lives of female musicians. From a fan's perspective, it may seem like most touring bands are just going around from city to city hooking up at will. But Ellen put the myth to rest — along with Neko Case, who went as far to say on Twitter that "Ladies in bands don't get ANY action." Ellen's was a brave and honest revelation.

"The only person who I showed it to before it was published was my mum. I had to warn her — 'so there's a part where I talk about giving blowjobs...just so ya know,' " Ellen recalls.

That kind of transparency in expression should come as little surprise to fans of the band. It's not uncommon for Gareth to write songs about one-night stands and other borderline-TMI between-the-sheets anecdotes. F'rinstance, here's how he starts the song "Straight in at 101": "I think we need more post-coital and less post-rock / Feels like the build-up takes forever but you never get me off..." Well alright then.

But hey, these are the details we 20-somethings obsess over, so why not sing about it, in unison, subtlety be damned!?