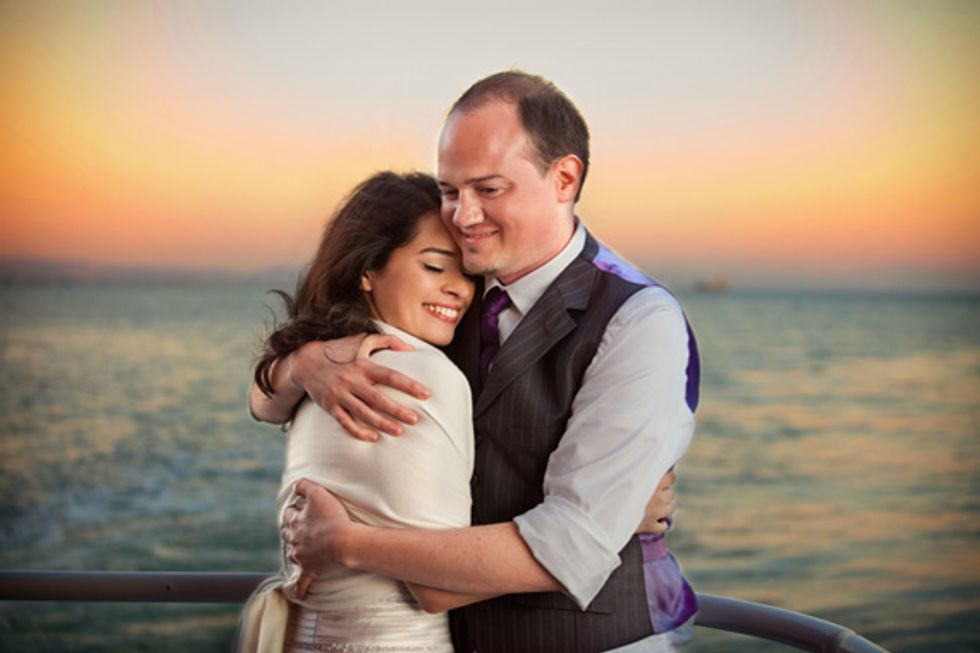 Man Crashes Party, Meets the Love of His Life

Technically, Sergio Villarreal wasn’t actually crashing—it was a holiday party for the tenants of a San Francisco office building where the start-up he worked for had just opened shop. But Michelle Gonzalez, who was the property manager at the time, says he might as well have been an uninvited guest. “In the older and conservatively dressed crowd, he and his coworkers stood out like sore thumbs,” she says. “They seemed like party crashers!” Because she was the only other person in the crowd in their peer group, Sergio and his coworkers came over to chat with her. Cards were exchanged, lunch dates were made, and five years later, Sergio and Michelle were getting married.

“We thought about eloping, but our parents really wanted to see us getting married,” says Michelle. “We didn’t give ourselves much time between our engagement and wedding day, so it was a bit stressful. I decided to attack it like I was planning an event at work.”

The biggest trick to pulling it together in a matter of months was going with vendors she had used in the past. From the photographers to the boat for the reception—at one time or another Michelle had worked with them all. “Going with people you know means that you know their work and you know what to expect—and they know you,” says Michelle. “It was a lot less stressful that way.”


The day started at the St. Regis, where the couple stayed and got ready for the wedding. “Of course, we live in San Francisco, so technically we didn’t need to get a room,” says Michelle. “But it made it more special to get out of our every day apartment.”

Next the couple went to City Hall, where they were married in a brief ceremony. Then they all headed out to Pier 40 for cocktails and dancing on the Empress yacht. “I’d used them before for work events,” says Michelle. “I knew that it would be a lot of fun, and it would give our guests, many of them from out of town, the opportunity to see all of San Francisco. We also got to watch the Blue Angels perform and dolphins swimming by—and everyone joked that the dolphins were so perfect, we must have hired them.”


Something about being on the water got the party started. “Once we set sail, everyone just let loose,” says Michelle.

Back on land, the couple invited many of the guests to join them in a private dining room for a special meal. “Not only do I love the food at Boulevard, I loved the rich red color of the room,” says Michelle. “It was very romantic.”

Given the settings, it wasn’t the most traditional wedding. “We aren’t traditional people,” says Michelle. “We are more laidback and playful, and our wedding showed that.”