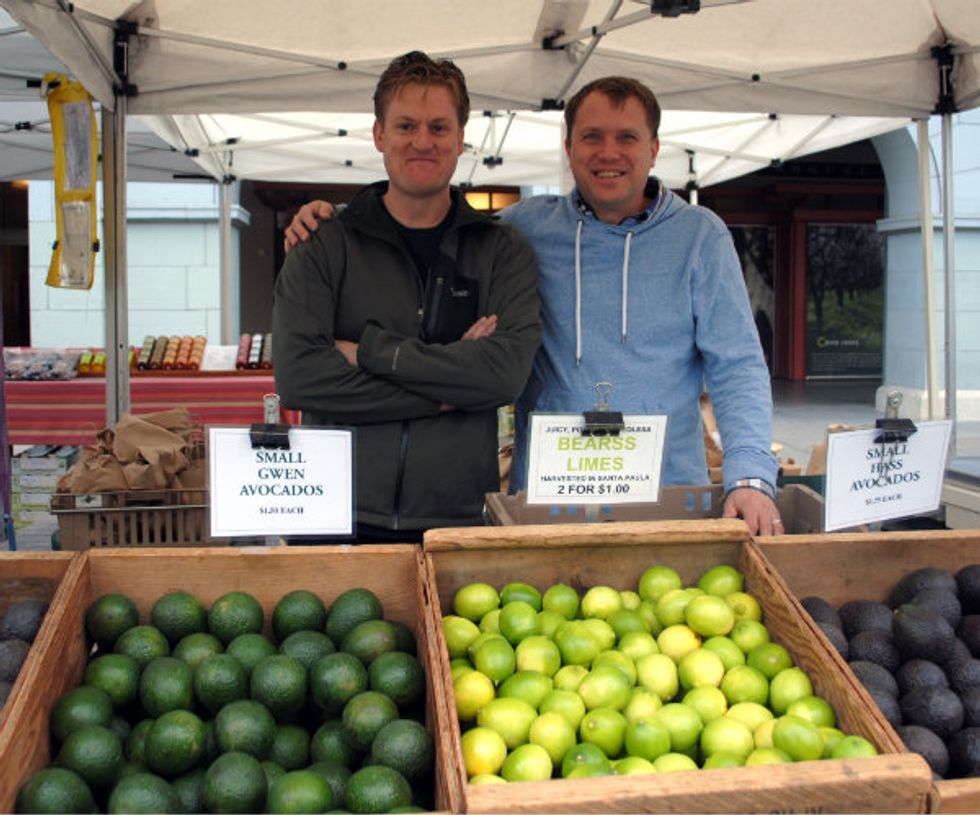 Erik Lowe and Aaron Toensing are well accustomed to scouring the Ferry Plaza Farmers Marketfor their seasonal menus. As former chef de cuisine of Bix, Erik has worked alongside executive chef Bruce Hill for the past few years to create fresh and market-inspired takes on Bix’s classic dishes. As pastry chef at Bix, Aaron’s desserts have always been a tribute to the ripe and ready fruits of his favorite farms, like Blossom Bluff Orchards and Hamada Farms. The duo is now continuing this tradition as they take over the kitchen at Bruce Hill’s new waterfront restaurant – Fog City.

This week, Erik and Aaron were at the market hunting for the last remnants of summer, like peppers and tomatoes, while looking decidedly forward to fruits and veggies to transition into the fall and winter months. The first stop was Brokaw Nursery, where they picked up avocados for a perfectly fall-sounding salad of butter lettuce, pumpkin seeds and market radishes, and as a component in the Smørrebrød sandwich made with seeded house rye, smoked salmon, egg salad, pickled Serrano chiles and shaved radish. Aaron says the sandwich is one of his favorite things on the menu right now.

Fog City’s menu is an eclectic but refined mix of classic and American favorites reinterpreted with California flair and a whole lot of locally grown goodness. A Kentucky tradition, “The Hot Brown” is elevated by the addition of house-brined and smoked turkey, Point Reyes Farmstead Cheese Mornay sauce and Early Girl tomatoes from Dirty Girl Produce. The sandwich is finished in the restaurant’s wood-fired oven, a focal point for many of the dishes. It is also where fresh shelling beans and the last of the summer tomatoes are roasted to perfection.

Erik and Aaron tasted and selected crisp Asian pears from K & J Orchards. “We’re just starting to play with those on the menu,” said Erik. “They are probably one of our favorite fall fruits.” Also on their list this week were late-season pluots, crisp Pippin apples and Iacopi Farms Brussels sprouts. The Pippins were destined for an apple and Hatch green chile pie on Aaron’s dessert menu, topped with frozen custard—a classic St. Louis treat—made with Straus Family Creamery milk.

As Erik and Aaron look toward the cooler months ahead they’ll be seeking out citrus from Tory Farms for both savory and sweet preparations and earthy root veggies from Heirloom Organic Gardens. “We’re not quite ready to let go of tomatoes and peppers,” Erik told me, “but we’re excited to work with whatever looks good to us in the market each week this fall.”