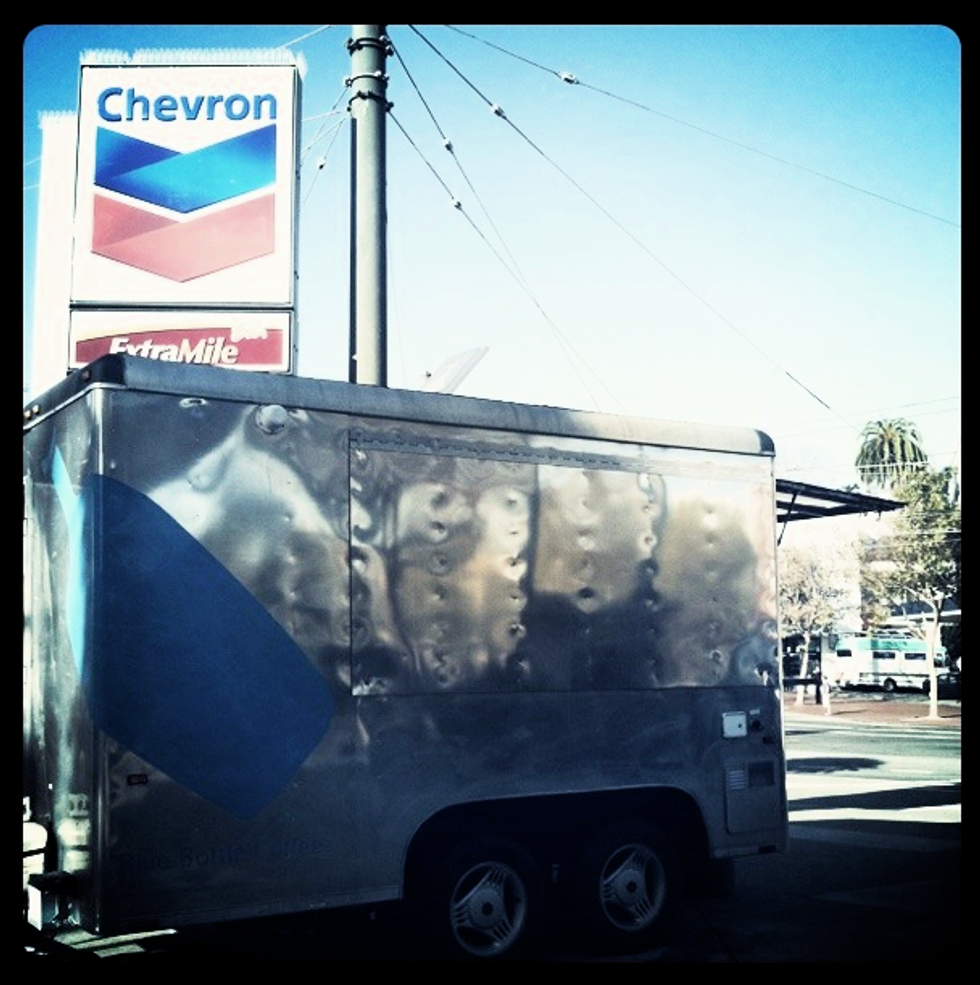 My Week in Food: Blue Bottle, Empanadas, The Perfect Costume

Last night, I came up with the perfect idea for Halloween and since I'm not into dressing up myself, you can have my ultimate mixologist costume. All it entails is a mustache, suspenders, a page boy cap, a shaker, and an ice pick for making perfect ice. Obscure bitters would be good. For a little gore, add some fake blood to the tip of the ice pick which you can say is from the customer you stabbed when they asked for a vodka tonic.

The Castro continues to get (a little) more gourmet every day. Today, on my way to 7x7, I stopped at Chevron at 17th and Market to fill up my gas tank and there, gleaming like a beacon in the sunlight, was the Blue Bottle trailer—surely, a sight for sore eyes for the boys that enjoy their late-nights. I'm guessing the barrista has already suffered her share of "fueling up" puns.

It's been a week of restaurant openings. I was at Wo Hing General Store—which opens tonight—where I sipped a great mezcal cocktail topped with foamy egg whites created by Brooke Arthur alernated with bites of dumplings. In the new era of the cocktail, any food/drink combo goes.

And last night, after a stop to check out the opening party at the new Claude Lane boite Claudine—and famished (restaurant openings rarely have enough food to feed a bird)—I got off the 16th Street BART for dinner at We Be Sushi. I usually go to Kiji if I want sushi in the Mission, but I figured I'd re-live one of my post college haunts, only to get the menu and have a moment of doubt about living through dinner of cheap sushi. Ah, the days of being 20 and carefree! But to my pleasure, it was just fine. A couple of tasty tamago nigiri, a little gomae, a bowl of complimentary miso and a Sapporo later, and I was on my way, brought back from the dead.

At the start of the week, I did an impromptu Mission District empanada taste off, and brought in to work the classic beef empanadas from Chile Lindo (with its great little outdoor counter) and Venga. Hot out of the oven—with a crust that was a bit pale still because they expect you to retoast it—Venga's Argentine beef won hands down. The filling was delicious. There was no contest everyone agreed.

For the magazine, I've been editing a story on pastry chefs and their favorite ingredients. What seemed like such a simple concept suddenly evolved into the writer dragging a winter squash—a 20-pounder that made the Great Pumpkin look puny—from Restaurant Michael Mina to our office in order to then hand it off to the photographer (who, from her studio, lugged it back to our office). At a loss with what to do with the leftovers, I gave the remaining 18 pounds of it to Lauren, an editor here, who then lugged it home on the BART and made a lot of squash soup. (And I'm perfectly aware that that was just one small element of producing one page in the magazine that you may just gloss over at the hair salon.) For the big reveal of the variety of squash and where to get it, pick up a copy of a December 7x7.