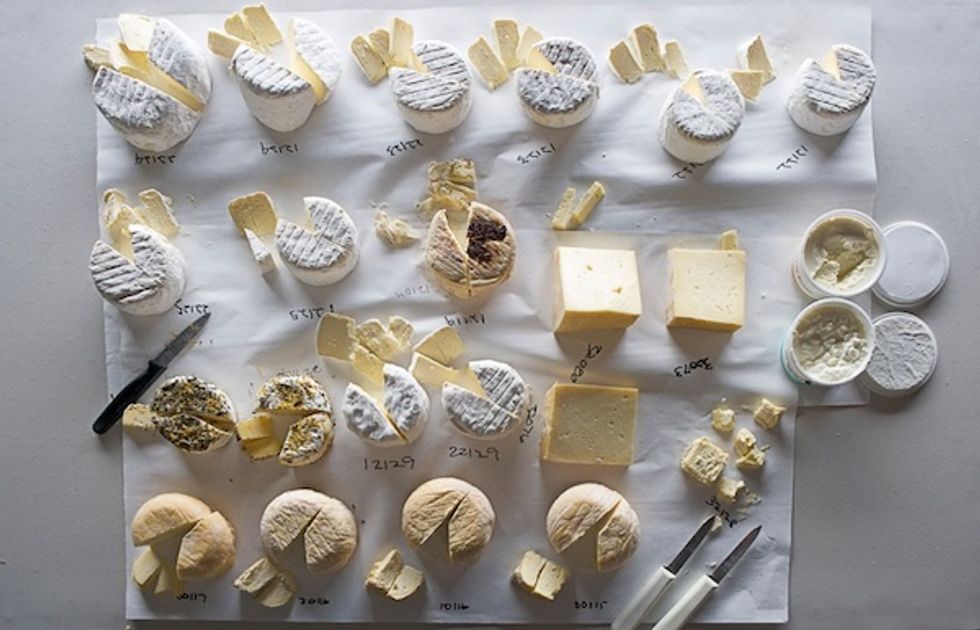 Smith and Conley are among those food leaders who gently guided us away from the bright orange cheese food of the sixties and early seventies, and their work improved the culinary scene via fresh cheeses made with organic and local Straus dairy. Their gift worthy tome covers the domestic artisan cheese movement and cheese terminology, and also includes recipes (with a nice riff on Ellen Straus’ Cheesecake that wisely includes crème fraîche). This is a handy cheese guide no matter what your cheese stripes may be.

Catch the Cowgirls in person at Omnivore Books next month on Dec. 5, then up at Shed for a ticketed event in Healdsburg on the Dec. 7. I interviewed Peggy Smith this week to find out more about the book, dessert island cheese desires, and how to craft the perfect cheese course.

Your story is tied to the rise of artisanal, organic and local food movements. How does that feel?

When I think of the Bay Area, it has a lot of industries and one of the most important industries is food. Being surrounded by all this agricultural land is one factor that helped things and there have been so many people who’ve worked hard and been involved. Here, you can see a chance for bread, charcuterie, vinegar, desserts, beer, and wine, cheese to all be made better; we have a platform to perfect and expound on ideas. With such an educated audience of eaters, we’re lucky.

The book starts with a beautiful description of the Cowgirls being inducted into the Guilde des Fromagers in France—which was a surprise at the time. What was that achievement like?

The Guilde has grown a lot in the U.S. and there are now lots of Americans involved, with meetings around the States and Europe. It’s really a fraternal organization and community—so you don’t really have to do anything. When we get together, it’s great to see new members and who belongs. The thrill of it was we’d always go to cheese stores during our travels and the one off St. Germaine, owned by Marie Cantal and Roland Barthélemy was always a highlight. It was neat to have that acceptance and see the leadership of the folks we had long admired.

What cheese platter advice can you give for the holidays?

If I am doing a cheese course, I would get three cheeses that you know work. Start with a linen wrapped cheddar, which is a crowd pleaser. Then look for ones that might be a little bit different, like a young aged goat cheese. Some don’t like goat cheese, but some folks only eat goat cheese. The third cheese would be our Mt. Tam, which we made specifically so that it would be easy to like.

Do you have any dessert island cheeses? What would you eat with it and who would be with you?

Oh gosh. I’m so practical, I’d get something like a Comte, which is a hard cheese and would keep well. A Mt. Tam too. I love fresh cherries, so I’d want those. If I couldn’t have fresh fruit, then I’d want some cherry confiteur. I would want to eat these with my group of close friends, because we’d be laughing and munching.