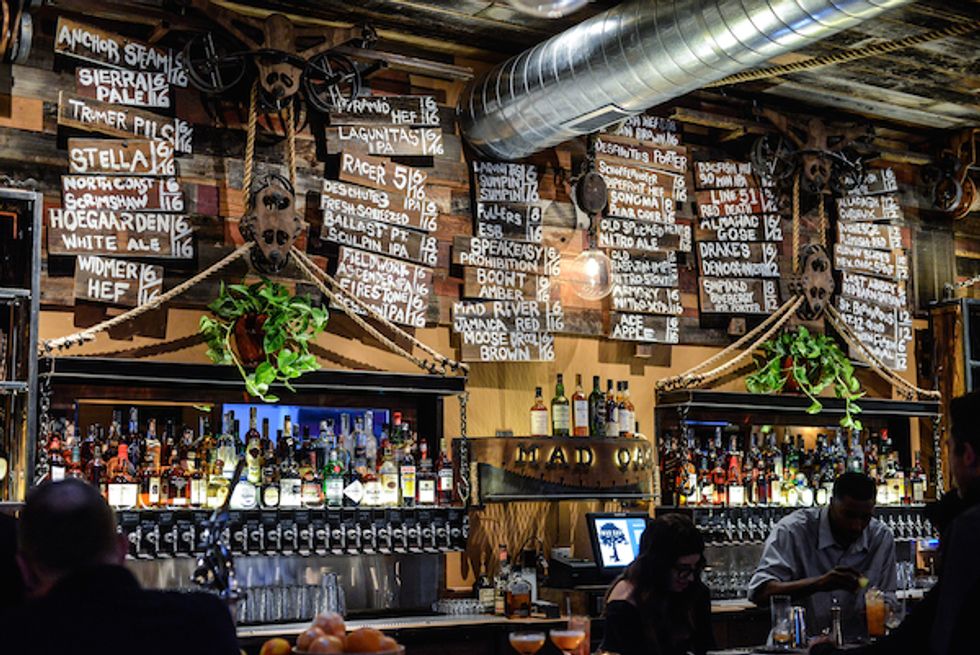 Oakland Eats: A Honky-Tonk In Jack London Square and the Return of Kingfish

Plus more new drinking destinations and In-N-Out in Alameda.

We've already dedicated much of the month's (okay, year's) eating to hardcore indulgence at Kronnerburger, but that doesn't mean we don't have room for other new Oakland openings in our hearts (and stomachs). Particularly when those openings are top notch drinking destinations, complete with enviable beer lists, delicious cocktails, and tasty food to match. Not to mention Jack London Square's very own honky-tonk (!), Kingfish's phoenix-like rise from the ashes, fresh Middle Eastern fare on Piedmont Avenue, and In-N-Out's newest location.

Following a beyond-badass move (in which the entirety of Kingfish's historic building was moved across the street to avoid being torn down), Kingfish has reopened for business. The interior is the same old Kingfish (hurrah), but their new digs include a back patio, a second bar, and an outdoor shuffleboard court. Here's hoping we can still enjoy some grub from Red Sea over a beer or three on forthcoming summer nights on the patio.

You no longer have to travel to Fremont to get your fill of line dancing and two-steppin'; Overland is opening this Friday and will be a must-visit for country music lovers and beyond. In addition to plans for a full roster of live country and bluegrass acts, the bar will be showing a huge number of sporting events, slinging hearty American fare (including pizza, barbecue, stew, and stuffed burgers), and offering line dancing lessons on the reg. They're focusing on the bar portion for their debut week, with lunch, dinner, and brunch to follow, the latter of which includes live bluegrass and bottomless mimosas.

The Yard at Mad Oak

For those looking for a drink without a country soundtrack, you'll find two worthy new options in the form of Mad Oak Bar & Yard and The Tap Haus. Mad Oak is the latest project from brothers Benjamin and Daniel Cukierman (of Shattuck Down Low and Room 389), and is a revamp of the former Oasis nightclub on 12th Street (between Madison and Oak, fittingly). The space boats a major outdoor patio and a roofdeck; they've got 40 beers on tap, a cocktail program showcasing fresh ingredients, rotating food trucks holding court in the yard, and a late night kitchen.

Up in Berkeley, Thalassa owner Doug Miller has opened his newest bar in the form of The Tap Haus. The German-style beer hall has 20 beers on tap (six of which hail from Deutschland), and beer-friendly pub grub including sausages and pretzels.

Fill your craving for flavorful Middle Eastern fare at Ba-Bite, now open on Piedmont Avenue. The menu will set Ottolenghi-devotees hearts a-flutter, with ample amounts of excellent-sounding mezze (Saffron cauliflower! Butternut squash with quinoa, pumpkin seeds, and cranberry!), hearty meal-sized salads, hummus platters topped with everything from falafel to lamb (and served with fresh pita from a local Palestinian baker), and daily changing hot specials (which may include the likes of chicken tagine, eggplant mejadera, and lamb ras el hanout).

Finally, yes, the newest Bay Area location of In-N-Out is now open in Alameda, where the first few days of business have drawn excitement, crowds, and plenty of chatter on Twitter. They'll be open until 1 a.m. Sunday-Thursday and until 1:30 a.m. on Fridays and Saturdays, providing a spot for late night animal style cravings.