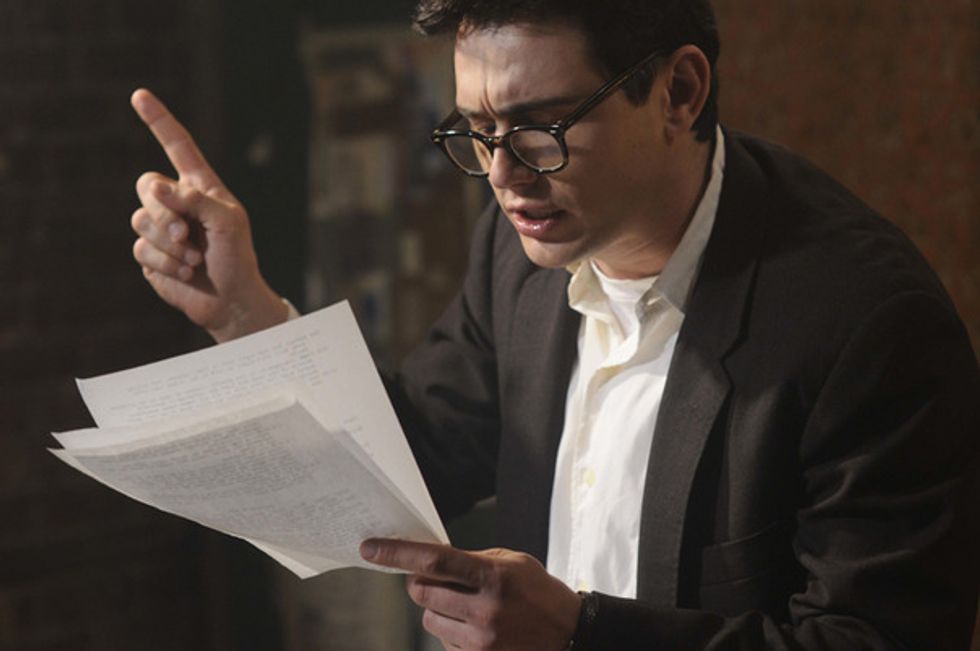 When Bob Rosenthal, executor of Allen Ginsberg’s estate, first approached filmmakers Rob Epstein and Jeffrey Friedman in 2005, asking them to do the seemingly impossible – adapt Ginsberg’s 1956 epic poem Howl for a movie – they immediately accepted his challenge. But how to do it?

“There was no way we were going to make the 50th anniversary, but we made the 55th,” says Friedman, 59. He and Epstein, an Oscar-winner for 1984’s The Times of Harvey Milk, had previously directed The Celluloid Closet, a 1995 documentary chronicling the history of gays in cinema.

“I’m not sure Bob understood how long it takes to make a movie,” says Epstein, 55. “We experimented with elements of a traditional documentary, but we wanted to figure out something that would be challenging and original in the same way the poem was in its day, and still is. Perhaps we were naïve, but we’re proud of what we came up with.”

What they came up with is a heady mix of courtroom drama, recalling the obscenity charges leveled at the poem and its publisher, Lawrence Ferlinghetti of City Lights Books, and a dramatic reading of the four-part work by the actor playing Ginsberg, Palo Alto native James Franco.

“Gus Van Sant suggested we meet with James when they were in town shooting Milk, and we quickly realized he was a serious student of literature,” says Friedman. “He’s a writer, an artist, and he had a personal connection with the Beats, growing up in Northern California and frequenting City Lights.”

“I didn’t know Ginsberg all that well,” adds Epstein. “I’d read some of his work, and I’d seen Jerry Aronson’s Life and Times of Allen Ginsberg, but I think James was more familiar with the poems than I was.”

From his early teens, Franco, 32, who wrote the 2007 indie drama Good Time Max and is pursuing a post-graduate poetry degree, was inspired by the countercultural writings of Ginsberg, William Burroughs and Jack Kerouac. For him, channeling the spirit of Ginsberg in Howl was both a personal victory and the logical next step in an acting career defined by unpredictability.

“Even now, as popular as he is in a lot of poetry circles, Ginsberg is viewed as an outsider by the establishment,” he says. “When the movie came around, it was a subject that I was interested in, and I’ve made three movies based on poems during my time at New York University. I like the challenge of translating words into images. And it felt like Ginsberg had been part of my life for a long time.

“There’s no audio or visual recording of Ginsberg’s first reading of Howl at [Fillmore Street’s now-defunct] Six Gallery, so it was nothing like when I played James Dean [in the 2001 TV biography of the same name], where I was recreating actual scenes from movies he was in, memorizing each movement. That’s just straight mimicry.

“With Ginsberg, we had early footage of him reading Howl, in the years just after it came out, but even then he was very stiff. Decades later, he seemed more at ease – he had more of a presence. I took cues from those later years, but there was a freedom in playing him because it allowed me to create a character, to incorporate some of his mannerisms but also to experience the poem as I was reading it. The poem has its own voice.”