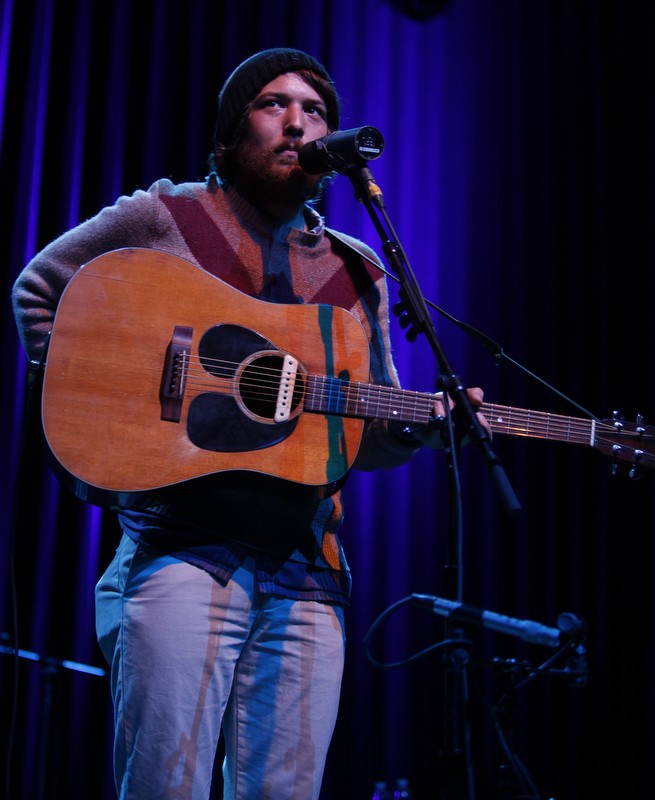 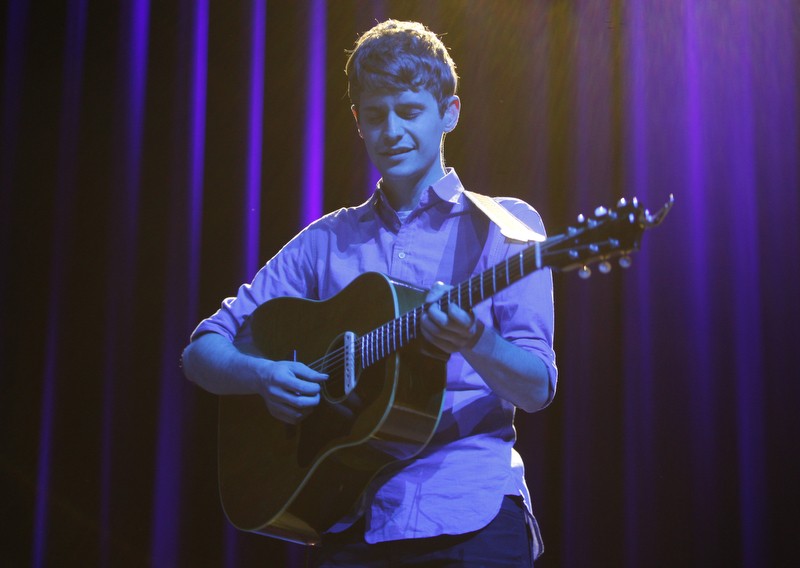 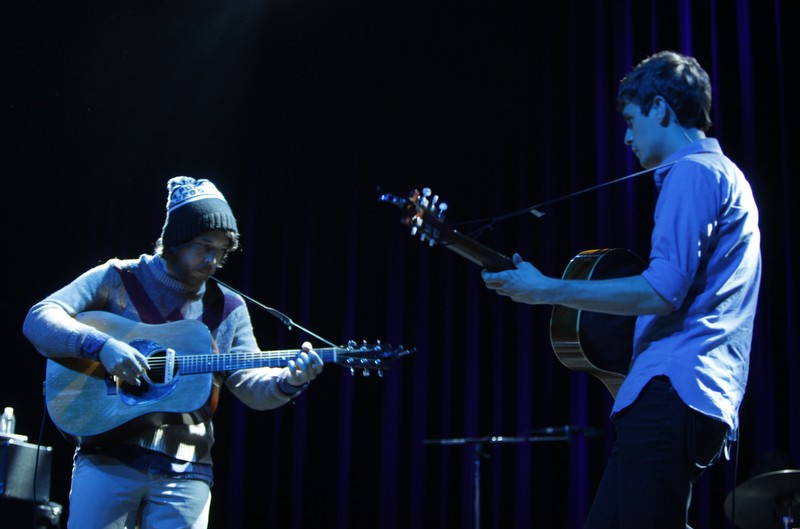 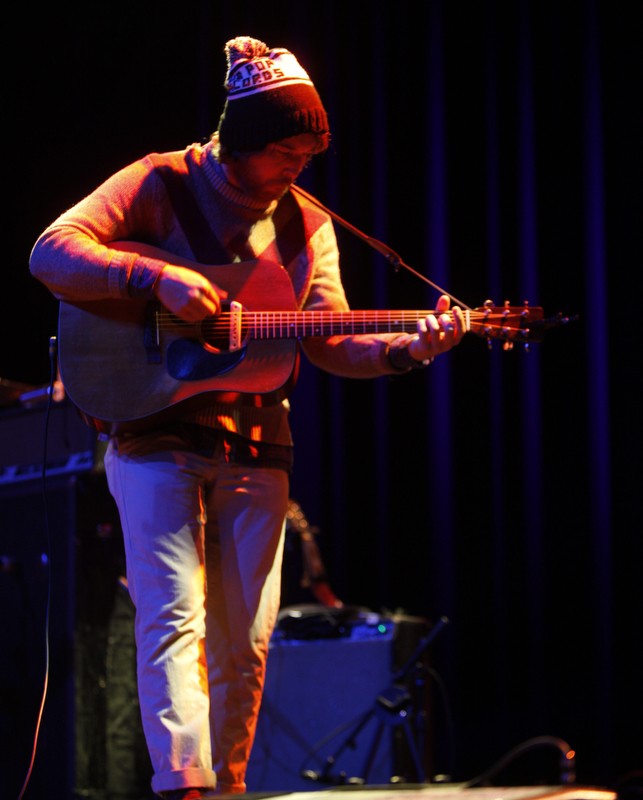 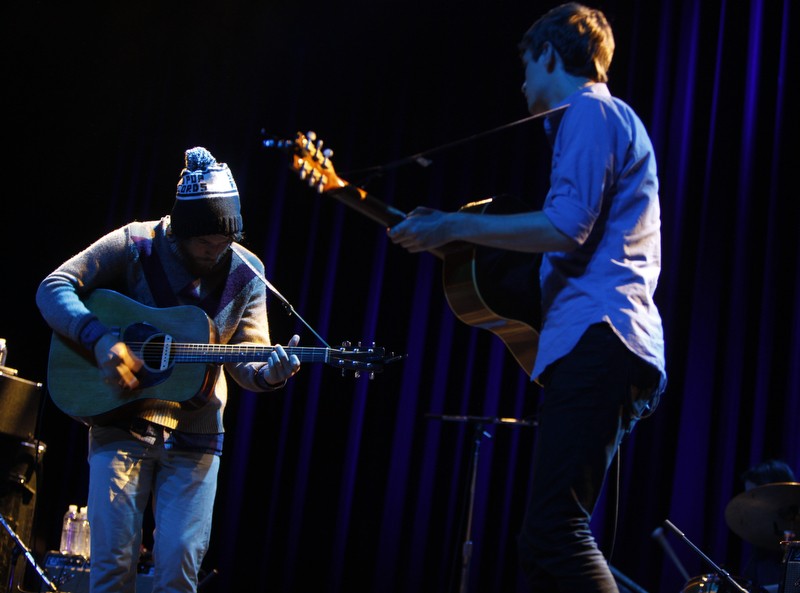 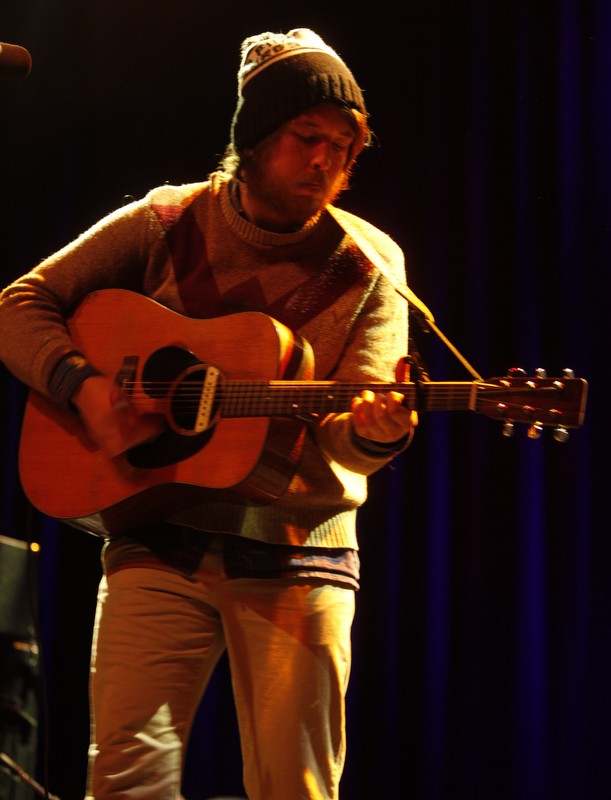 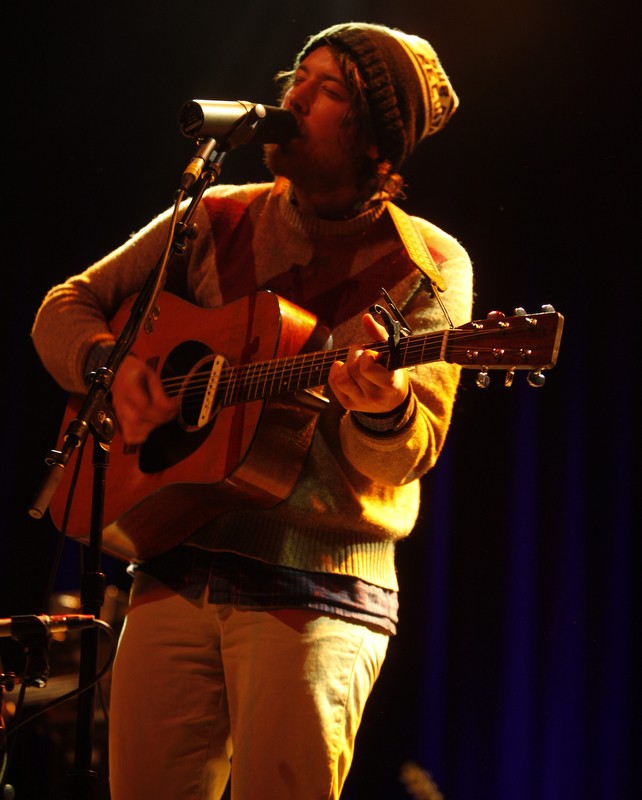 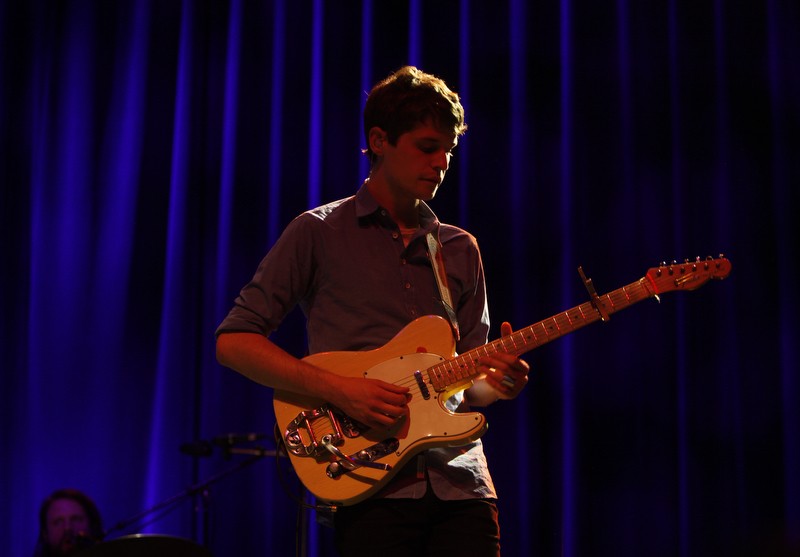 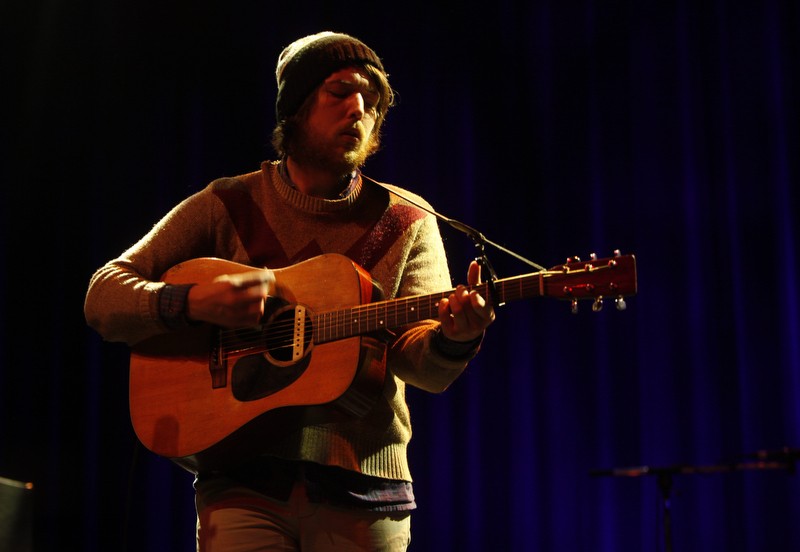 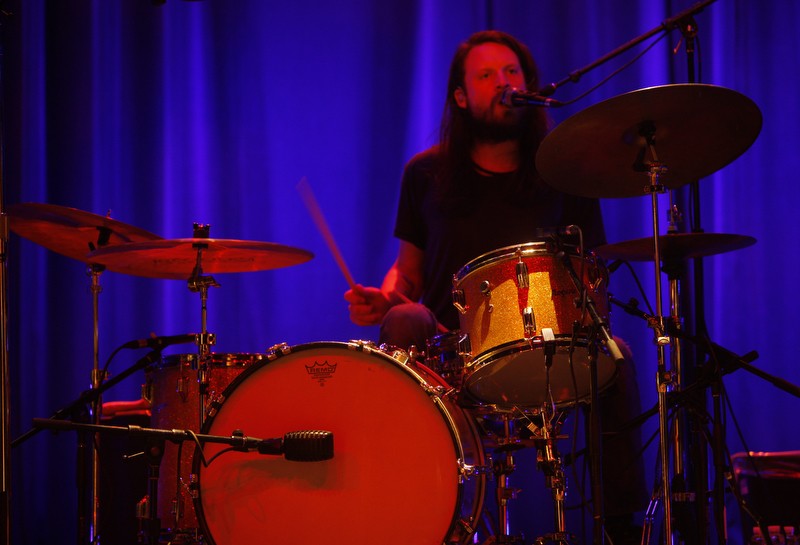 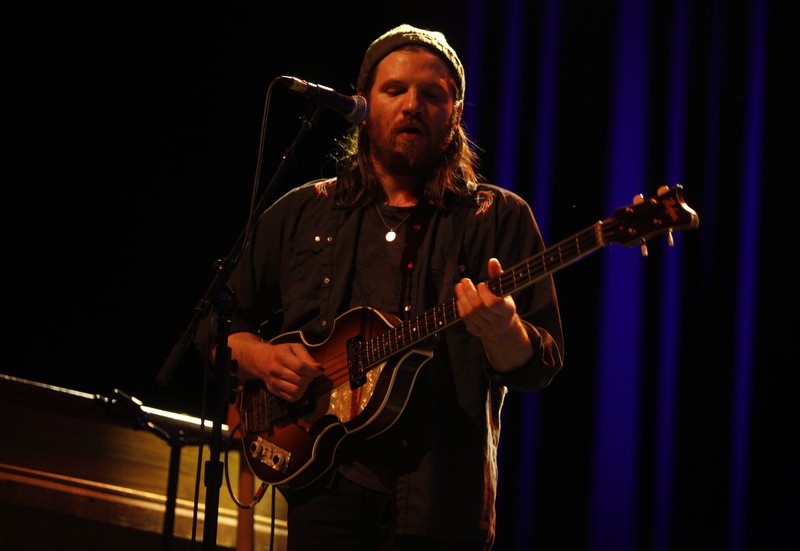 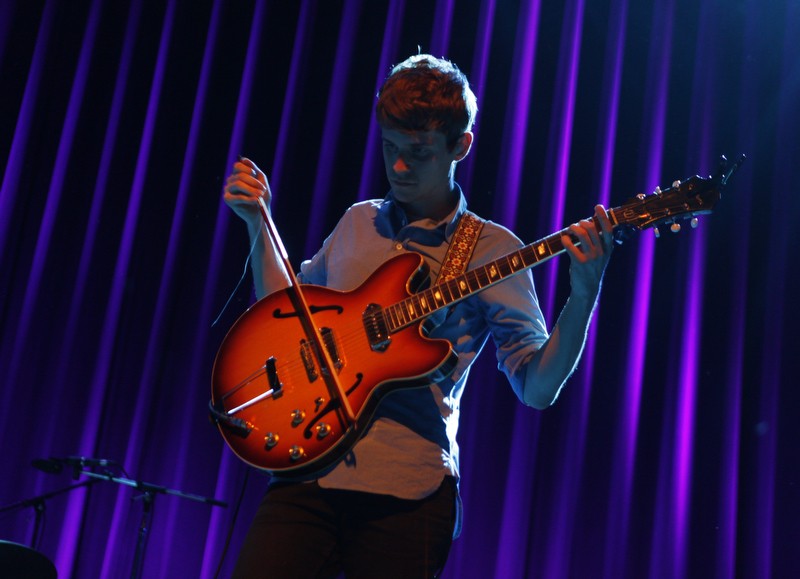 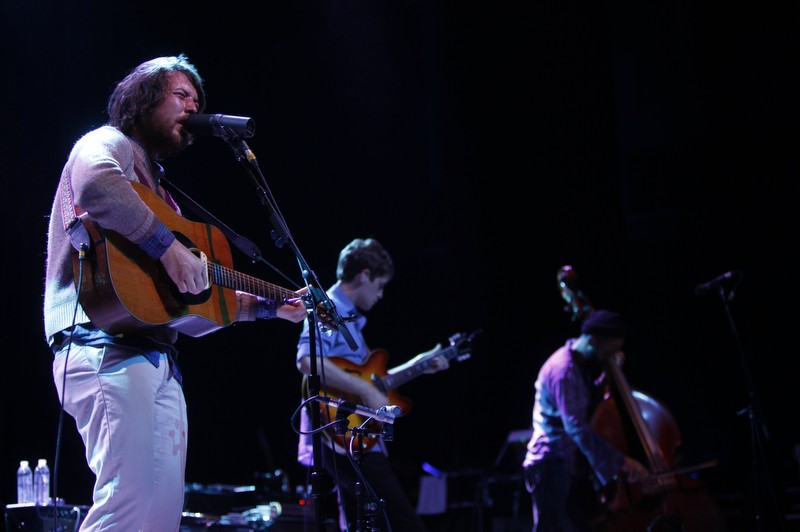 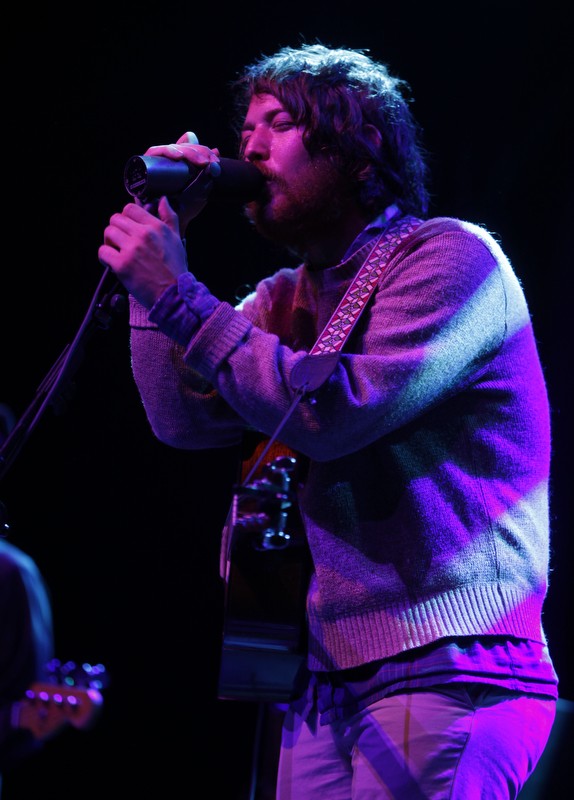 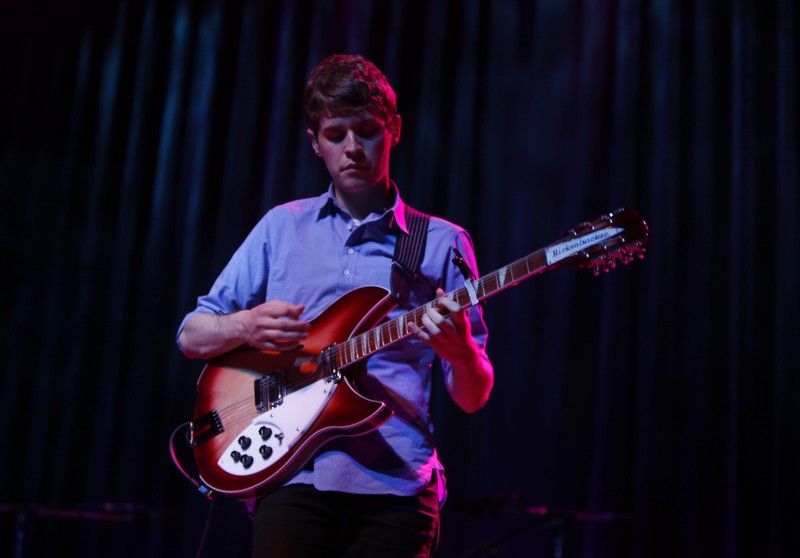 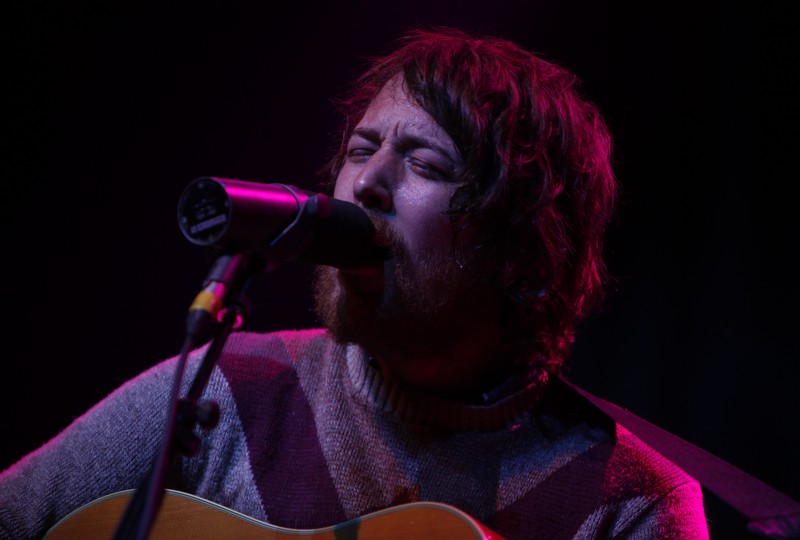 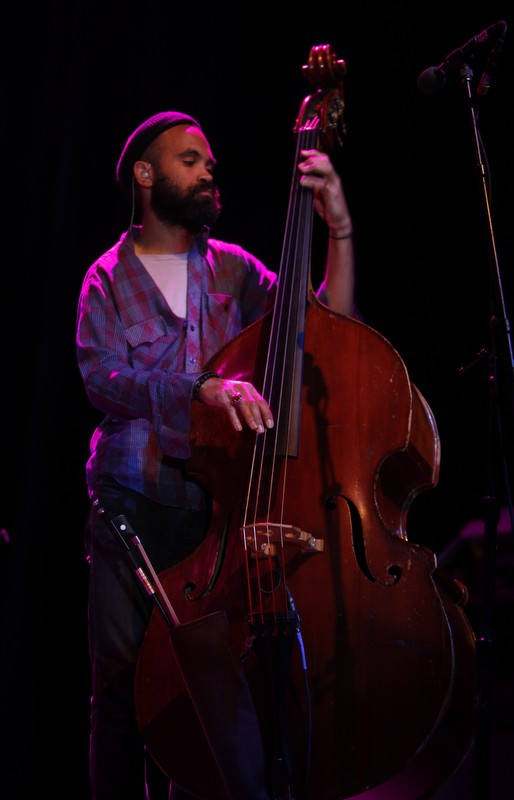 Seattle’s Fleet Foxes are something of an anomaly these days, that rare laptop-less band with members who ask for less instrumental volume from the soundboard guy. Their organic approach to the song — hyper-lush vocal arrangements, dreamy and varied instrumentation, and sweeping, ambitiously evocative songs — has, incidentally, won them plaudits from an increasingly broad range of critics and fans alike. Long story short: they’re the new faces of indie folk rock, a title all but secured by their latest LP Helplessness Blues (Sub Pop) released to e-standing ovations this past week on a blog near you.
Long before the new album’s release, the band’s Cinco de Mayo date at Oakland’s Fox Theatre sold out, and Thursday night’s crowd seemed relatively unaware but appreciative of their new work.

Bandleader Robin Pecknold, all shaggy hair and knitted wool, a Scooby Doo character to be conceived later, is the lyrical conductor onstage, armed with an acoustic guitar and howling pipes. An angelic choir boy’s voice is a prerequisite for membership in this clan, and all six members at one point or another contributed precise backing vocals — mostly drawn-out oohhhhhhs and ahhhhhhs – as if they were soundtracking Jesus’ resurrection.

The lion’s share of the set list was pulled from Helplessness Blues, starting with the chirping instrumental set opener “The Cascades,” which segued seamlessly into “Grown Ocean”, propelled its steady but thrusting percussion. Drummer Josh Tillman, who has forged a name for himself in recent years as a refined solo act in his own right (going by J. Tillman), gave this song and others such as “Battery Kinzie” and “The Shrine/An Argument” a much weightier and rocking presence in the live format.

The band’s ability to alternate from said rocking moments to lullaby-mode, and back to folkier sections and even singer-songwriter plaintiveness is part of what keeps listeners on their toes. “Bedouin Dress” is one such track that puts Fleet Foxes in a hard-to-categorize category, at turns a finger-snapping soliloquy and at others a bluegrass, old-timey romp with a squeamish violin riff.

If their sound isn’t altogether “old-timey,” it’s certainly not of a modern timestamp. It’s clear in songs like “Sim Sala Bim” — which lets acoustic guitars and Pecknold’s vivid storytelling do all the work — that Fleet Foxes’ sound would have fit in better with the folk revolutionaries of the ’60s. Without getting too hyperbolic, seeing the band at perhaps its artistic prime some 50 years later, in the same stomping grounds where the initial movement helped get its start, felt important.

Pecknold admittedly wasn’t much for banter, but he did thank the crowd and the Fox and its “Aztec lords for having us in your pleasure dome,” in reference to the theater’s trippy, larger-than-life inner facade. The pleasure was all ours.

Anthony Doctolero, founder of GroupGreeting, spreads appreciation (and trees) around the world

5 Ways to Give Back in the Bay Area This Thanksgiving