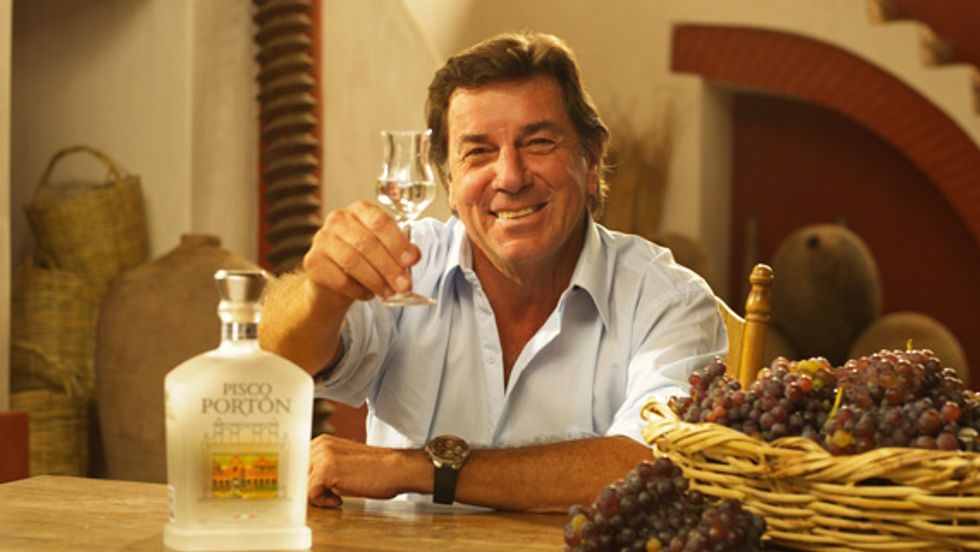 Pisco, the Peruvian (and sometimes Chilean) spirit best known for putting the zip in pisco sours, has a rich history in San Francisco. Pisco was immensely popular in San Francisco during the Gold Rush and into the pre-Prohibition 20th century (especially among the newly-rich gold diggers and sailors) because it was easier to ship pisco from Peru than it was to transport whiskey from the East Coast.

Ground zero for pisco imbibing was the now-defunct Bank Exchange bar, which stood right where the Transamerica Building is today. Owner Duncan Nicol invented the super-potent pisco punch — a cocktail made famous by Mark Twain and Rudyard Kipling that you can now have your fill of at modern watering holes like Hog & Rocks and Pisco Latin Lounge. Since those days, the pisco distilleries in Peru and Chile were ravaged by wars, volcanic eruptions, earthquakes and the wrath of El Niño, and the spirit's exposure in the states waned as a result.

Johnny Schuler, the world's leading pisco authority and master distiller of Pisco Porton, hopes to bring pisco back to the forefront of the American consciousness. "We were punished and punished, until finally we're able to share this wonderful, wonderful spirit with you guys in the States," says Schuler. Pisco Porton, a fruity mosto verde pisco, is what he calls the "most sublime" of all piscos (with notes of mango, tangerine, green apple, pineapple and orange blossom).

Here, he talks to 7x7 about his love affair with spirit.

When did you first try Pisco?
I’ve always had an attachment to pisco since my father always drank it. But the miracle happened 25 or more years ago when I was invited to organize a national regional pisco championship. Pisco, for me, was just that ordinary spirit used in restaurants.  Three or four samples into the competition, I sipped one glass, and it changed my life. It just took me by storm. It hit my brain, I couldn’t breathe because of the beautiful, fabulous aromas that I was smelling and the tastes I was feeling and I began to feel passionate about it. It was love at first drink.

Pisco has such an interesting, romantic history to it, so much more than almost any other spirit.

It's in our music, it's in our poetry, in our dances, in our disparities. It accompanies us wherever we go. We celebrate everything with pisco here.  It's a beautiful expression of our terroir, our soil, sun, our water that comes from the Andes that irrigates the beautiful quebranta grape that grows in unbelievably huge bunches. A 300-year-old process transforms the grapes, it's all natural. No enzymes, no added anything. We ferment it, then distill it in copper pot stills, and we turn it into this magic spirit.

What kind of feedback have you been getting from bartenders?

They love it, and they're excited. They love that it puts fruit into their drinks, instead of something like vodka, which is supposed to be odorless, colorless and tasteless. And tequilas are harsh and strong. This pisco is much more complex than vodka, yet much smoother than tequila, because it's handcrafted without any shortcuts in the oldest distillery in the Americas, built in 1684. It's so pretty I wanted to make it into a Playboy centerfold! People have to see it!

So you're working with the oldest distillery in the Americas. How have you modernized it for Pisco Porton production?

We restored it, but since the original way pisco was made was very artisanal, we needed to build a new distillery to recapture the old way for optimal production. We decided it had to maintain the same philosophy of the 1684 distillery, so everything is moved by gravity. There are no pumps, because there weren't any back then. We've tried to replicate a modern way of what was done 320 years ago. And we've worked to have a total compromise with nature. We spent a lot of money buying a plant in Holland, which will transform the spillage (waste from the stills) into fresh water again. We're doing it because we don't want to contaminate anything nor exploit nature. We turn the unused parts of the grapes into compost, which we fertilize our own vineyards with. There are steel canals on the fermenters that route water to flower beds on the roof, which breathe Co2 and convert that to oxygen. We're trying to help in a small way.

If you want to venture beyond classic pisco drinks like Pisco Sours and Pisco Punch, try these recipes, courtesy of Pisco Porton:

Pisco Portón Lime Slushy
2 ½ parts Pisco Portón
½ part Rose's lime juice
½ part fresh lime juice
Sugar for rim
Lime slice garnish
Fill blender with ice and wet ingredients. Blend until frozen. Rub the rim of a tall glass with a lime slice so that the sugar will stick, then rim the glass with sugar and add blended ingredients. Garnish with a lime slice.