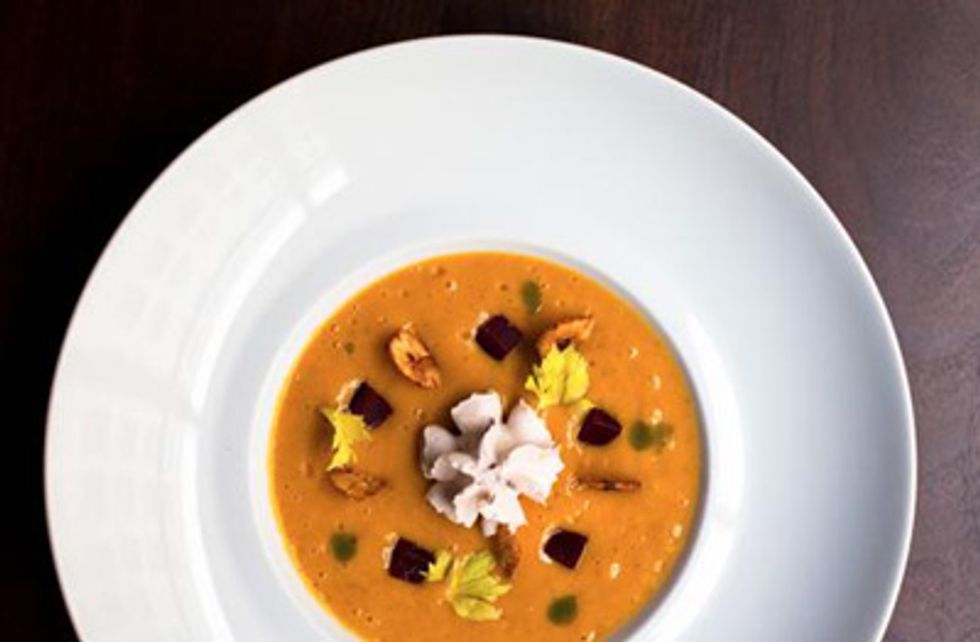 Pumpkin Morning, Noon and Night: An Exercise in Seasonality Disorder

We've broached seasonality disorder once or twice in the past. Maybe you experience it while biting into a peach on a cold August day. Or perhaps you really get that Twilight Zone feeling after seeing roasted asparagus (topped with an egg of some sort?) on menu after menu after menu after menu during the spring. Now that it's November, pumpkins and squashes explodeth all over the place, but—blessedly—their versatility keeps us guessing. Because it can swing sweet or savory, you'll see the veg in everything from breakfast bread to your happy hour cocktail. In fact, you can probably get through a day where everything that passes your lips contains pumpkin or squash. Here's proof.

Breakfast: At Blue Bottle's four main locations in Oakland, Mint Plaza, The Ferry Building, and Hayes Valley, you'll find their seasonal pumpkin buckle in the pastry case now. Baristas on duty say the sweet bread goes great with any of the their Central American washed coffees, like the El Majahual Washed available now.

Snack: Starting next week,grab a bag of The Pastry Cupboard's caramel corn with spiced pumpkin seeds. It might not be the healthiest mid-afternoon pick-me-up, but the sugar rush will probably have you feeling festive until you hit the bottom of the bag.

Cocktail: At Jasper's Corner Tap, bartender Kevin Diedrich shakes rum, with Velvet Falernum, lemon and maple pumpkin butter to create his Great Pumpkin Fizz cocktail. The vanilla notes in the rum blend with the clove hints in the velvet falernum to give the (delightful) finished effect of booze-soaked pumpkin pie filling.

Dessert: In lieu of homey pumpkin pie, we like the elevated twist Scala's pastry chef takes with his steamed pumpkin pudding topped with pecan brittle.

Brunch:Zazie has its labor intensive sugar pie pumpkin pancakes on the menu right now. Although many bakers insist canned pumpkin is just as good as the real thing, owner Jennifer Piallat disagrees. The pancakes coming out of her kitchen are made with real pumpkins that are roasted and mashed into the batter on the premises.

Beer: At Fat Angel, the owners are total geeks about their draft beers, and their pumpkin inflected offerings are no exception. Nothing like the cloying, artificial tasting pumpkin brews you may have tried in the past, their La Parcela No. 1 Pumpkin Ale has just the slightest hint of pumpkin and baking spices. For a heavier hit, owner Jason Kirmse says his T.R.E.A.T Imperial Chocolate Pumpkin Porter leaves "a mind-blowing, palate-staining finish that's akin to a huge dollop of fresh whipped cream on top of your pumpkin pie." See more of our pumpking beer picks here.

What's your favorite pumpkin/sqaush laced libation or bite right now? Do share in the comments.