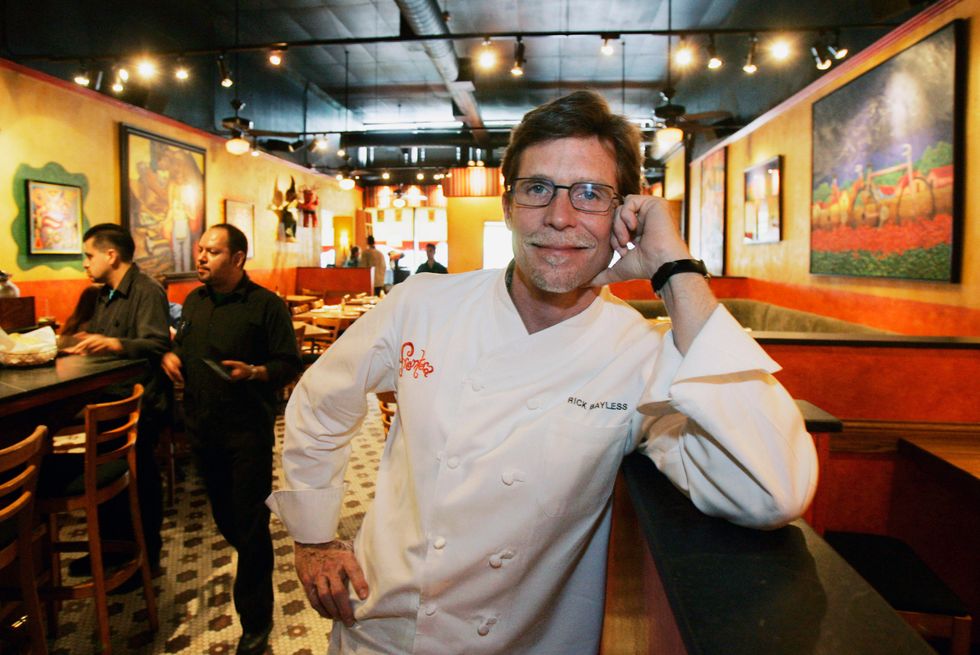 Born in Oklahoma City, to a family of grocers and restaurateurs best known for their down-home barbecue, Top Chef Masters season-one winner Rick Bayless has established himself as one of America’s foremost authorities on Mexican cuisine, translating more than three decades of research and in-kitchen experience into a multimedia culinary empire, locally represented by the Frontera Fresco restaurant in Union Square.

For Bayless, 57, giving demonstrations of his culinary technique and swapping recipes with fans and fellow foodies is key to his enjoyment of taking his craft on the road.

Calling from Chicago, where he owns four restaurants – the Frontera Grill, Topolobampo, the XOCO café and another branch of his Frontera Fresco chain – the man voted the James Beard Foundation’s National Chef of the Year in 1995 says the greatest benefit of being a modern-day “celebrity chef” is the heightened visibility that allows him to talk shop with the millions of fans who watch him on TV, follow his Tweets, and surf his website for the secrets to making the perfect Mexican meal.

On his strategy for planning the Sunset Weekend:
“When I’m going to do a public event, I want to give people something that they don’t even need a recipe for – something simple that doesn’t have too many different elements, ingredients and steps. I want people to be able to remember the basics of it, because I want to encourage them to go into the kitchen and cook. When they feel comfortable and empowered, they do that a lot more, but if they feel they need a recipe in front of them that has to be followed to the nth degree, they’re much less likely to do it themselves.

“So on a TV show or when I make a public appearance, I usually don’t talk about quantities so much as the flavors that I get out of each ingredient. That way people can taste along with me, they can think about it, or they can vary the ingredients and create their own flavors.

"At the Sunset Celebration, I’m going to do a classic Mexican shrimp cocktail, like the kind you get on a beach in Mexico. My favorite way to get that cocktail, and this is a very common practice, is to get a goblet of shrimp and all of these condiments around them that you use to create your own sauce. Ketchup is usually the main component, but that’s only the base of it.

“Then you add lime juice, Mexican hot sauce, onions and cilantro, avocado, and you stir all that together, giving you an amazing, bright-tasting, very Mexican-tasting shrimp cocktail. But you suit your own tastes as you create it by choosing which ingredients to use and which flavors you want to emphasize. And that’s really what it’s all about – putting your stamp on everything, exploring your creativity in the kitchen.”

On the rise of chefs as reality-TV stars:
“Back in the ’60s, when Julia Child went on TV for the first time, that was kind of revolutionary – there were only a couple people who’d been cooking on TV before that, and certainly chefs in restaurants were always kept hidden behind the kitchen door. You didn’t know who the chef was. In a famous restaurant, you were more likely to know who the maître d’ was than the chef. That’s really changed now, and we have Wolfgang Puck to thank for that.

“He was the first one to put an open kitchen in the middle of the dining room, and he lit the kitchen with stage lights, so that was the theater of the evening. That was back in the early ’80s, and since that time, the wall between the kitchen and the dining room has come down, so not only do we know there are talented chefs preparing the dishes, we also wonder what we can learn from them. I think that’s what inspires regular, everyday home cooks to make their own dishes.

“Being able to come to an event like the Sunset Weekend is a great opportunity for me because I get a chance to listen to what people are thinking about and what they’re talking about. It helps me when I write recipes for people who cook in their homes because it gives me a clue what they’re working with and what’s going to be the most useful to them. And that’s the benefit of going on TV, being able to connect with and encourage wider audiences of potential cooks.”

On interacting with would-be apprentices in a live environment:
“That’s my favorite thing, because it keeps me really in tune with what people’s concerns are. Like if I’m making a dish like a sundried-tomato guacamole, when people start talking to me about how they’re going to serve it, I get a better understanding of what they are interested in using that recipe for, and let’s face it – everybody needs a good guacamole recipe cause it seems to be the first thing people think of when they’re having company.

“If I can give them some of the basics of the techniques I use to make what I consider a great guacamole, that’s essential, but I also can make them understand how, when you make it, to keep it cold so it doesn’t get watery and runny. To me, I’m giving them a service, and they do me a service in return by saying something like, ‘Oh, so-and-so in my family can’t eat this one ingredient, what can I replace it with?’ That’s what gets me to thinking, and it gives me a topic I can address in my next book.”

On finding the perfect avocado in Chicago, where he makes his full-time home:
“Twenty percent of our population in Chicago is Mexican, over a million within city limits, and most of them are first or second generation. There’s a much higher concentration here than in the Bay Area, and we’ve developed a direct relationship with a co-op of farms in western Mexico, in Uruapan, the ‘Avocado Capital of the World.’

“That’s the place where the avocado came from, and we work with a packing house in Mexico that delivers them three or four days after they’re harvested, then they go into a ripening room here. I think we have an amazing quality of avocado here in Chicago, and I’d invite anyone to come here and let me take them to a Mexican grocery store here. It’s a remarkable experience.”

On his brother Skip, the onetime Bay Area journalist turned ESPN commentator best known for his caustic take on all things athletic:
“My brother and I are very different people. He’s a total hermit, and I haven’t spent Thanksgiving dinner with him in 20 years. But people like to assume that Thanksgiving at the Bayless house is me preparing some great meal and him complaining about how bad it is. It’s really not that way.”

On how a boy from barbecue country grew up to be an expert on Mexican cuisine:
“I went to Mexico for the first time when I was 14, and I just fell in love with it. It was a remarkable, love-at-first-sight experience, and when I got to Mexico City, I felt as if I was finally home. It was the right place for me. I had the opportunity, year after year during high school, to go back and visit different regions, and when I got to college I studied Spanish literature and Latin-American studies.

“I lived in Mexico during that time, and after college I went on to live there again for five years. It wasn’t an obvious choice, but for me it was always the right one.”