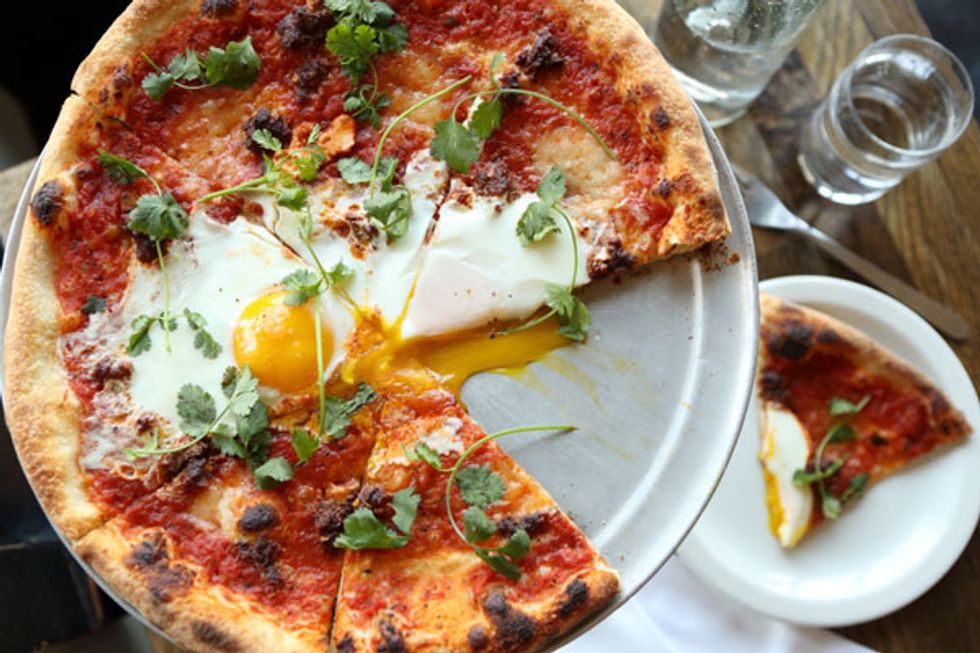 We’ve gathered the top hangover busting breakfasts in town, certain to cure what ails you. And don’t forget to hydrate.

Eddie’s is one of our favorite old school diners in San Francisco for a lot of reasons—the no-frills decor, the mismatched mugs, and the reliably awesome griddled fare. Give your hangover a triple punch with their gut-busting combos—$6.05 gets you three pancakes, two eggs, and a meat of choice (go for the bacon or smoked sausage). Go ahead and spring for some hash browns for $1.75 if you’re feeling particularly peckish. While Eddie’s has all the makings of hangover-battling perfection, we’ve got to dock some points for the lack of booze, and the fact that you’re going to have to stand in line to get a spot.

Pho is one of the best hangover cures out there, and we’re obsessed with the subtly rich, star anise-scented broth at Yummy Yummy. All of their soups are delicious, but when we’re talking hangovers, there’s no beating the pho xelua, an $8.50 extra large serving featuring their house special combination of rare steak, tendon, and beef balls. Between that and the generous pours of green tea, your hangover will be drowned out in no time.

Art’s beats Eddie’s at the old school diner game by a hair—it’s smaller, has counter-only seating, and possesses the kind of dark charm that evokes years of grease and love. Art’s will also involve waiting in line, but the resulting hash brown sandwich is so perfectly appropriate that it’s worth the extra period of pain. It’s like a reverse engineered omelet—lacey-edged hash browns are folded around melting cheese and salty, tender meat—go for the misleadingly named beef teriyaki for $7. It’s actually well-seasoned beef bulgogi, and it’s delicious. The accompanying two eggs are best ordered runny, to coat the meat-potato-cheese mix, and bring you back to life.

4. The Corner Store, The Biscuit Stack with Chicken Apple Sausage

You know it’s a good sign when a brunch menu has an entire section dedicated to biscuits. The Corner Store features toppings like cheddar and thyme béchamel, and chicken and veggie gravy, but we like going all out with their biscuit stack for $13. Here, the biscuits are topped with a sunnyside-up egg, that same creamy cheddar sauce, and a meat of your choice—go for the hearty halves of snappy chicken apple sausage. Pair it all with a cocktail (the Noble Buck, $11, with bourbon, pineapple, and spicy ginger beer is particularly good) and walk the path of redemption for last night’s transgressions.

When your hangover is bad, but not bad enough to call for a burrito the size of a small child, find salvation in the breakfast tacos, $8.95, at The Little Chihuahua. Pliant flour tortillas are filled with the stars of the aforementioned burrito—soft-scrambled eggs, Mexican potatoes, chiles, and onions—plus your choice of 4505 Meats chorizo and jack cheese, or spinach and goat cheese. Beans come on the side, so you can cross into dangerous stomach territory if you dare. And yes, you definitely want a Negra Modelo to wash everything down.

Here’s how we cook when we’re hungover: throw ingredients in a pan. Add butter. Chug water. Add cheese, add Tapatio. St. Francis Fountain has this recipe down to a science with the Chef’s Mess, a frisbee-sized plate of eggs, potatoes, veggies, and bacon, topped with some sour cream for good measure. Sure, it’s $11, but it could feed a family of four, or at the very least, the beast that is your hangover. Go ahead and get a milkshake, too, if you’re feeling daring.

We all know that smoky, dripping meat is a good thing for a hangover. And no one does meat better than Ryan Farr at the 4505 Meats crew. While navigating a farmers market can be a tricky proposition in your condition, the maple bacon sausage breakfast sausage, $10, is well worth the effort—the sausage is made from bacon, and maple syrup, and is as sweet and salty and greasy as the good Lord intended a hangover cure to be. Stacked with a runny-yolked egg, and peppery greens on a sinfully buttery cheddar scallion roll, plan on a nap after you wolf this bad boy down.

It’s a universally acknowledged truth that pizza is a great idea when you’re hungover. Take it up a level from cold leftovers straight from the fridge while still in your underwear (though that has it’s benefits) and get to Starbelly. Their chorizo pie, $15, is topped with ample amounts of well spiced, house made sausage, runny eggs, and some fresh sprigs of cilantro. Bonus points if you can score a seat on their back patio; the fresh air will do you good. Regardless, you should absolutely go for a reviving morning cocktail, or a bracing draft of local brew.

Breakfast burritos are easily one of the more important food items our fair city has to offer your hangover. And there’s no beating La Palma’s, $6.19, piled with freshly scrambled eggs, refried beans, cheese, salsa, and beyond on their freshly-made tortillas. The tortilla truly is the star here (and some of the better taquerias in the city stake their reputation on sourcing from La Palma), but it’s also essential to remember that you can get chicharrones. In your breakfast burrito. Yes.

Extreme hangovers call for extreme cures. On those days, when you may be half dead and may still be half drunk, drag your sorry self to Gallardo’s for a steaming bowl of tripe-heavy menudo. Go for a large for $8, bury your face in the deeply-spiced steam, and dig into the rich, offal-filled bowl of goodness. Stop only for water, and go to sleep immediately after. Tomorrow is a new day, and you have the menudo to thank for that, friend.