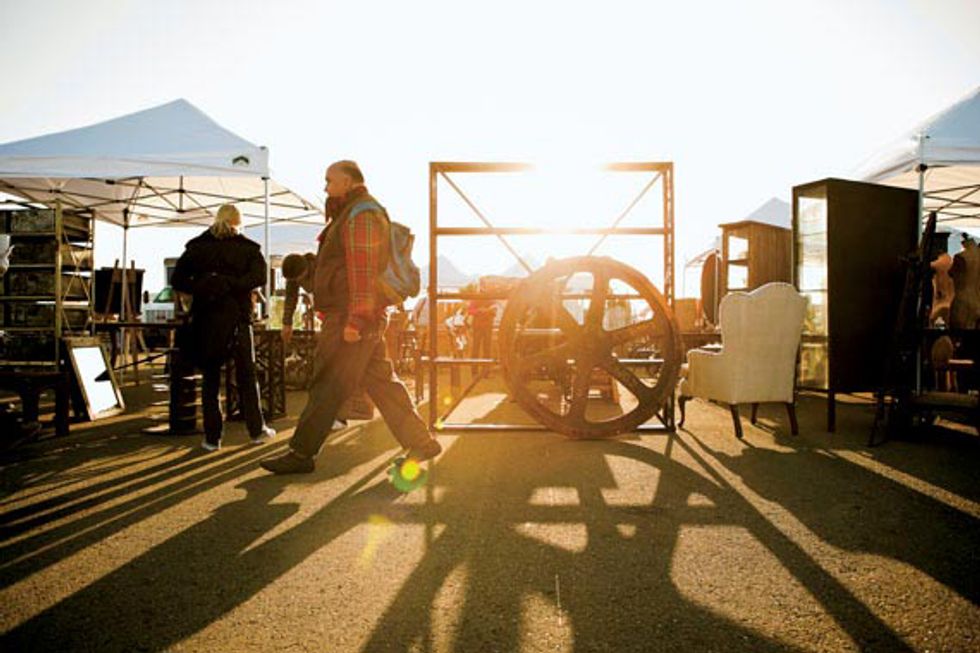 Shopping The Alameda and Candlestick Park Flea Markets With The Experts

The king of Bay Area flea markets has long been the Alameda Point Antiques Faire. But this past summer, a smaller market opened at Candlestick Park, meaning there’s now an even closer treasure trove for vintage hounds. We called on some of the city’s experts to lead us through both markets and show us how to find the gems amid the rubble.

The expert: Andrew McKinley is the owner of Adobe Bookshop, the beloved secondhand bookstore located in the heart of the Mission. McKinley also has an impressive collection of antiques, including rare coins, Victorian furniture, and vintage belt buckles. Among the design set, his reputation for spotting treasures among the tchotchkes is second to none.

1. Andrew McKinley regularly stops by Sally Smith’s stand for higher-end finds. There’s a mirror made of Peruvian hand-hammered silver for $750. “She’s not the cheapest seller here,” he says, “But her items are well-considered and priced appropriately.”

2. Vendor Joel Dressler would have fit in well during the Gold Rush. He always brings unusual items to the market. McKinley buys two turquoise-encrusted rocks for $5.

3. Among McKinley’s many collections are his numerous vintage black Bakelite Couroc serving trays. He has more than 40, all made in Monterey. A nice selection ranging from $20 to $40 (“a very fair price,” says McKinley) can be found at Taz Aoyama’s stand.

4. At Mickey’s book stand, McKinley spots a great find: a rare first edition Keith Haring art catalog. Mickey is asking $75 for the book early in the morning, but when McKinley returns at the end of the day, he purchases it for $20.

5. There is a ton of Danish modern furniture at the market, says McKinley—some of it good, some of it not so good. But Eric Bastrire’s stand is a great place to find well-maintained and authentic ’50s-era pieces. There’s a 1958 Kubus rocker for $900 and a Brasilia credenza from Broyhill for $650.

6.Massive books containing property records of early Oakland residences are priced at $125. A single one would make a great coffee table book; a pile of them topped with thick glass, a one-of-a-kind table.

7. McKinley is in heaven as he views a Byzantine coin (circa 600 A.D.) for $300 at George Klimacek’s stand. He also checks out Klimacek’s sterling silver items. “George sells some of the best-priced sterling silver I’ve ever seen. He basically prices it by the ounce,” says McKinley.

8. Robert Shimshak, a friend of McKinley’s and a well-respected antique photography collector, shows his find for the day: a series of Civil War postal covers, which he plans to reprint and then use to make collage art.

9. McKinley jokingly calls vintage French grain sacks (being used to recover chairs as well as for table runnners) “the new velvet” and says that Kymberley Fraser’s stand is a good place to pick up the hot commodity at a fair price. Fraser also has an extensive collection of vellum (calf skin)–bound books dating back to the 16th century. Mostly written in Latin, they’re best used as home decor accents.

10. The owner of Aardvark Antiques bought this midcentury-inspired ottoman and lounge but later decided to put it on sale at her own stand for $150. This is common practice: Many vendors buy pieces from one another and then resell them.

The market:Candlestick Park Antiques & Collectibles Faire is held at Candlestick Park on the third Sunday of the month (the fourth Sunday should there happen to be a 49ers game). Admission is $10 (6–8 a.m.) or $5 (8 a.m.–3 p.m.). candlestickantiques.com

The experts: Two years ago, photographer Kelly Ishikawa and stylist Rod Hipskind opened The Perish Trust, a pop-up shop in NoPa and reliquary of by-gone Americana. The two longtime friends initially thought it would stay open just long enough to unload some of their collected finds, but today, it’s still going strong. You’ll also see their unique stamp on Hooker’s Sweet Treats, the Tenderloin coffee shop they helped design earlier this year. We followed the pair around the Candlestick market as they put their eagle eyes to good use.

1. The Candlestick market is a great place to buy large pieces. It’s a fourth the size of the Alameda market, so in comparison, you’re much closer to your vehicle (meaning you don’t have to schlep things so far). Above, Kelly Ishikawa and Rod Hipskind carry a couple of rustic tables they’ve purchased for a charity event they’re helping organize.

2. Kevin Randolph is a dealer with whom Ishikawa and Hipskind often work. At his booth, they purchase a rare time punch clock and a quirky pair of antique goggles.

3. Ishikawa says that old work equipment can be used to add interest and heft to a space. At Gary Nagle’s booth, she purchases three vintage fishing weights. The asking price is $30 each, but Ishikawa buys them all for $75.

4.Vintage seltzer bottles are all the rage, and the perfect addition to a home bar. The asking price for one is $35 but Ishikawa says it’s a bargin—the retail price would probably be double that.

5. Mitzi Jackson—or as she’s better known, “The Tweed Lady”—sells coats that have been handwoven in Scotland, each with a description of where it was made, which store first carried it, and sometimes whom the coat was originally made for. The vintage tweeds, for both men and women, range from $25 to about $100.

7. Dealers know which items are selling at the big retail stores and will bring similar items to market, often at similar prices—although occasionally one comes across a great deal. A trendy sunburst mirror at Helene DeSouza’s booth is being sold for $125, a bargain.

8. Finding a dealer with a large collection of one particular item often provides a great opportunity to compare and contrast. Bill Peterson’s booth has a great selection of cork lamps, prices ranging from $20 to $35.

9. Some dealers are also artisans. Sylvia Ortiz and Robert Shipleman take massive pieces of salvaged wood and turn them into floor mirrors and kitchen islands that would instantly be the focal point of any room.

Wear comfy shoes. Expect to walk many miles over the course of the day, so protect your feet. No flip-flops or loafers, and don’t even think about heels.

Bring a backpack. It frees your hands to peruse items. Also, you won’t need to lug around a big cart. If you buy a large piece, most sellers have dollies that they’ll loan you. Get a stamp for reentry.

Get there early. It costs a bit more to enter when the gates open at 6 a.m., but it’s well worth it. The best finds go fast. “Get there early and help them unload the trucks,” says Andrew McKinley, only half-joking.

Stay late. This is an all-day affair. A lot of sellers will hold out for the best price, but by the end of the day they probably don’t want to load their truck back up and therefore it’s a good time to make low-ball offers.

Don’t show your cards. A seller can tell when you’re ecstatic about an item and will be less willing to negotiate.

Make sure it has good bones. If you’re looking to refinish or reupholster an item, make sure the foundation is solid.

Beware of trends. Sellers have a good sense for what’s in vogue, such as midcentury furniture, and will mark these items up to retail prices.

Eat and drink. Don’t make decisions on an empty stomach. Grab a bite from the food stands, selling everything from hot dogs to gourmet lamb burgers.