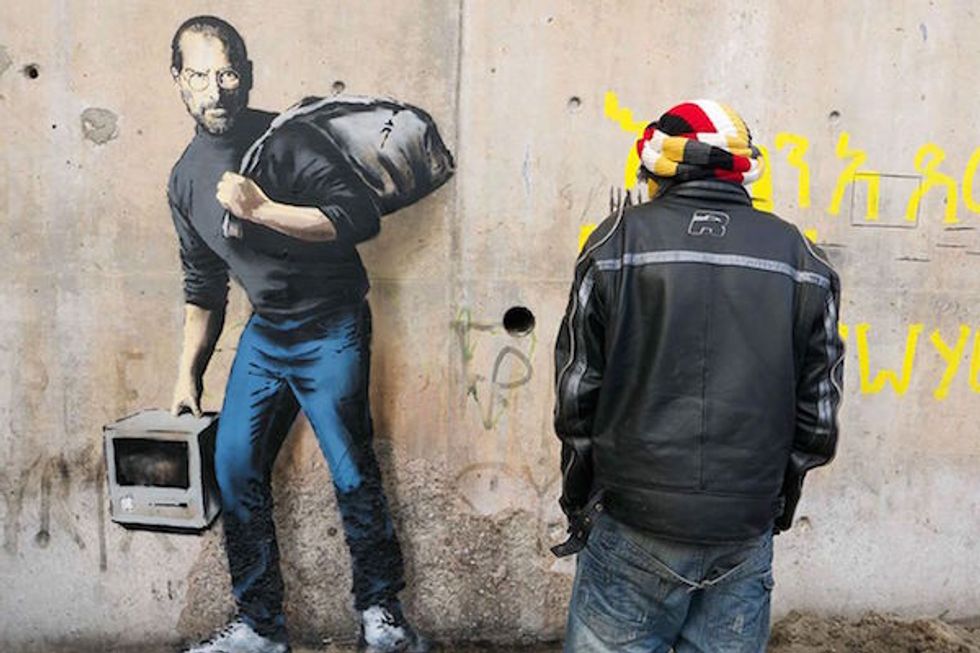 Steve Jobs Is the Subject of Banksy's Latest Mural in France

British street artist and political activist Banksy revealed his latest project in a refugee camp in Calais, France on Friday and you might recognize the main portrait.

The new murals feature a large image of Apple co-founder Steve Jobs, whose biological father immigrated to the United States from Syria in 1954. The artwork portrays Jobs holding an outdated computer in one hand and a trash bag in the other. A nearby quote reads: “Maybe this whole situation will just sort itself out.”

“We’re often led to believe migration is a drain on the country’s resources, but Steve Jobs was the son of a Syrian migrant. Apple is the world’s most profitable company, it pays over $7 billion a year in taxes — and it only exists because they allowed in a young man from Homs,” Banksy said in a statement.

The artist created four works in and around Calais, including one mural showing immigrants crowded onto a raft reaching out to a passing cruise ship, and an image of a child holding a telescope with a vulture perched on top of it. The city of Calais has announced that the artwork will be protected.

In September, Banksy also announced that he would send materials from his parody pop-up theme park Dismaland to the camp, which is home to several thousand migrants and refugees. The lumber from the park is being used to build shelters.