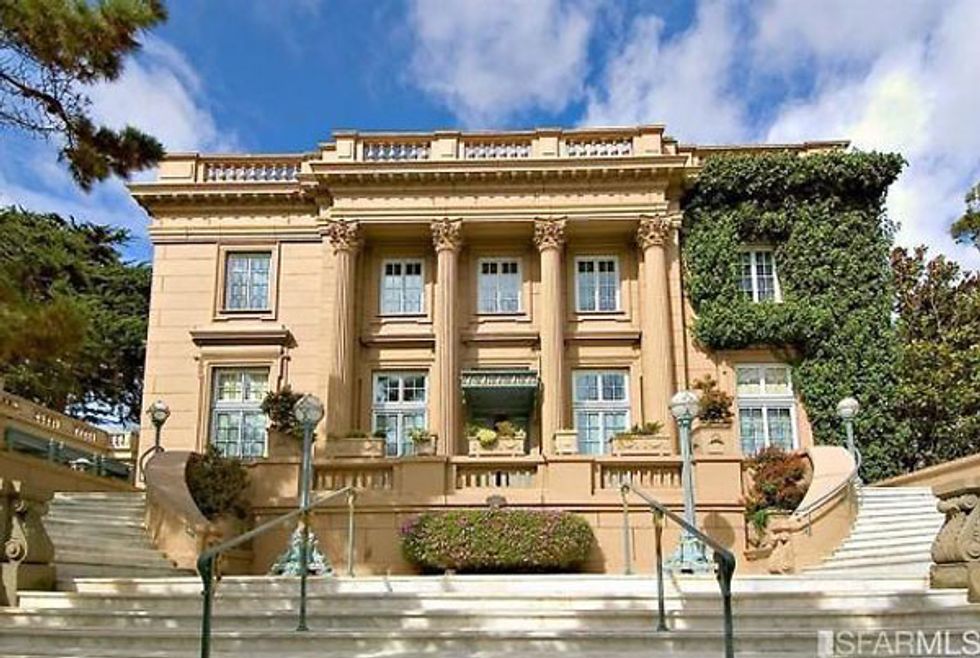 There's some juicy – if entirely unconfirmed– celebrity real estate gossip whirling around town. It seems that pop-country superstar Taylor Swift is circling the so-called Koshland Mansion, an illustrious and slowly crumbling Neoclassical villa set amongst the natty nabobs of high-class Presidio Heights, that’s currently on the open market with a $17.995 million asking price.

The thing is – I can't fathom what Little Miss Swift—a sweet-faced and unapologetic She-Ra of top-selling, romantic, revenge ditties— would need or want with an historic and exceptionally grand 18,000-square foot hardcore fixer-upper in San Francisco.

Don’t get it twisted, Bay Area. I left my heart in San Francisco—not to mention my BFF Fiona Trambeau—long before all these digital gajillionaires were even a twinkle in their moms' eyes. But Taylor Swift snatchin’ up the damn Koshland Mansion? Gurl, pleeze. We don’t mean to be mean, but just because you can afford to buy this house with the leftover coins in the bottom of your designer hobo bag does not mean you should, or that you have the necessary fortitude to restore and shepherd an edifice of this import and magnitude. But we digress.

The extravagant but down on her heels mansion – a modified replica of Marie Antoinette's opulently over-the-top Petit Trianon outside of Paris – was built in the early years of the 1900s by a wealthy wool merchant by the name of —You got it! — Koshland. In 1910, so the stories goes, Mister Koshland employed an international coterie of seven live-in domestics to care for his family of five.

The symmetrical, sandstone-faced residence is currently owned by financially embattled tech tycoon Halsey Minor. (He's the fella who founded, fostered, then sold Silicon Valley juggernaut CNET to CBS in 2008 for $1.7 billion, then bought a bunch of really expensive houses and horses and, alas, filed for Chapter 7 bankruptcy in May 2013).

Mister Minor acquired the mansion in 2007 for $18 million and (allegedly) engaged the no-doubt prodigiously pricey services of Oval Office decorator Michael Smith to give the place a thorough makeover. Naturally, and made obvious by the current, un-reconditioned condition of the property, Mister Minor’s ever-more reduced circumstances tabled that endeavor long ago.

Decadent and delightfully anachronistic original architectural elements appear to remain largely intact, if dusty and a bit downtrodden. Twin stone staircases make for an august approach to the towering front façade of the main house. A rotunda entrance vestibule leads into a column-ringed, triple height central atrium that’s topped by a massive stained glass skylight and surrounded by a quartet of roomy reception rooms. For low-key evenings at home there’s a second floor den, and for soirees and other dressy events there’s a mirror-lined and gilt-trimmed ballroom on the lower level.

Miss Swift has been much in the celebrity real estate news lately. There are miles of whispers and reports that she's the mystery buyer of director Peter Jackson's 8,000 square foot duplex penthouse in lower Manhattan and there's unconfirmed word – through the Rhode Island real estate gossip grapevine – that Miss Swift might be looking to unload the 11,000 square foot ocean front Colonial she bought last year for $17.75 million. She also owns a duplex penthouse in downtown Nashville, and a micro-compound set deep in a Beverly Hills canyon. The question now is will she soon be spotted tossing a frisbee in Dolores Park or sipping a sazerac at Trick Dog?

Click here for more photos of the Koshland Mansion!

Mark David, aka The Real Estalker, has been dishing dirt on the wacky and sometimes inexplicable real estate doings of the rich and famous since 2006.