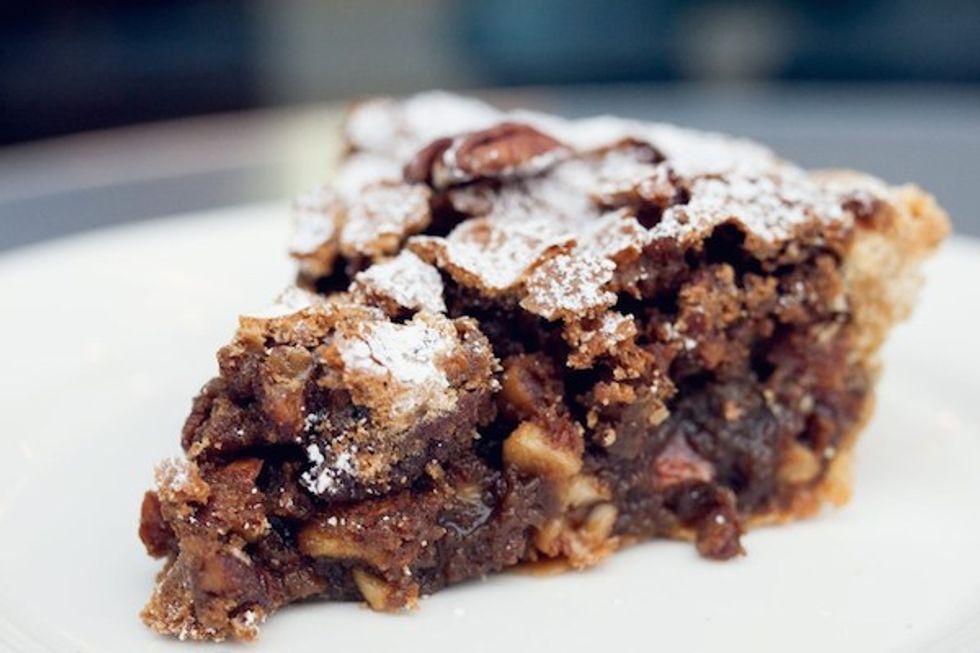 Some of us here at 7x7 think that cake reigns supreme in the circular desserts category, while others believe the nostalgia, homeyness, and American spirit of pie trumps any layered creation. For the latter of us, we’ve ranked the best in the Bay. Get out your forks, and open your pie hole.

Beloved maker of Irish shortbread treats, Clairesquares owner Claire Keane has ventured into the pie realm with this richly layered beauty: her famous shortbread crust topped with caramel, a ripe hit of bananas, light-as-air cream, and chocolate shavings. Plus, you can buy the kit and make it yourself at home.

Anna Derivi-Castellanos and Lenore Estrada of Three Babes Bakeshop’s Classic Apple features a rotating roster of just-right organic apples that they source from Central Valley farms (including Granny Smiths, Pippins, Gravensteins, and Pink Pearls, depending on the season) and an all-butter lattice crust that won’t quit. Also, they gave us the recipe.

The adorable duo behind cupcake perfection at Healdsburg’s Moustache Baked Goods (Osvaldo “Ozzie” Jimenez and Christian Sullberg) has struck dessert gold again with their newest sweet destination on the square, Noble Folk. This decadent creation, made with Crown Maple Syrup, black walnuts, and Swiss chocolate has an ideal ratio of nut to chocolatey filling with a homey hint of maple syrup on a toothsome crust—it’s like Christmas in Vermont, without the frostbite. (Healdsburg) // 116 Matheson St.

Imagine a gourmet peanut butter cup, in pie form, with an Oreo crust. Now, wipe away those tears of joy and dig in to Chile Pies & Ice Cream take on this classic combination, with a chocolate cookie crust filled with creamy peanut butter mousse, topped with a fudgy bittersweet chocolate ganache and a sprinkling of honey roasted peanuts. Yes, this is real life. (Nopa) // 601 Baker St.

This is next-level pecan pie, people. Flour & Co. baker-owner Emily Day goes cray with a gooey filling packed with not one, but three kinds of nuts: pecans, cashews, and almonds. I’m convinced it would woo even non-nut lovers with its balanced and complex, not cloying, sweetness and crisp crust. (Tenderloin) // 1030 Hyde St.

I’m a bit of an apple pie connoisseur, so naturally I couldn’t pick just one from the myriad of options in our fair city (Bluestem Brasserie also makes a fabulous one). So sue me. Black Jet Baking Company founder Gillian Sara Shaw’s version looks like it’s from an old timey film set, and it arrived on our desks still warm, smelling like heaven and memories. With a perfectly domed sugar-dusted crust hiding massive chunks of spiced apples, it’s an ideal specimen.