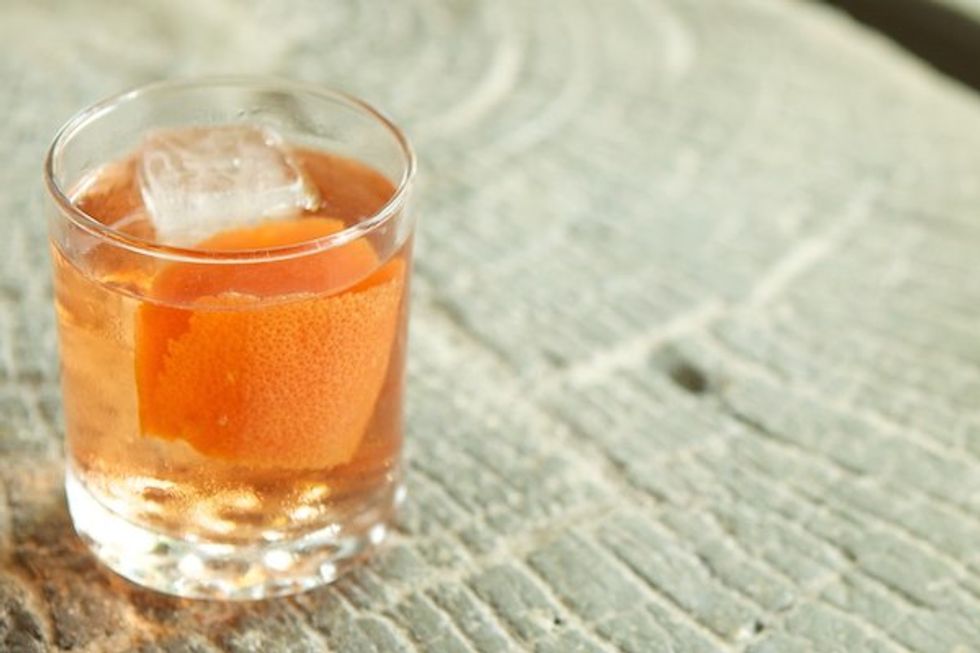 The Four Gayest Cocktails in the Castro

In honor of Pride Month, I bring you a roundup of four of the "gayest" cocktails I could find around the Castro – where, by the way, in contrast to previous decades, it's not so impossible to get a well made drink anymore.

And no, there's nothing especially gay about these drinks, apart from a couple of the names and references (OK, the last one is just plain gay, you guys). But, you know, I'm trying to get in the spirit of the season here.

The Adios, My Friend at Blackbird

The name is a tongue-in-cheek reference to a particularly strong and bright blue spinoff of the Long Island Iced Tea, known as the AMF or Adios Motherf***er, which happens to be a popular order at nearby dance bars like Badlands. But this barrel-aged concoction bares practically no resemblance to that drink, apart from it being a mix of several spirits. It's a combination of two tequilas (Calle 23 and Sotol Reposado), two mezcals (Peleton and Cielo Rojo Bacanora), Luxardo bitters, and curacao. And yes, after a couple of these, you're probably saying "Adios" for real. 2124 Market St.

The Big Unit at Hi Tops

Leave it to the gay community to open a sports bar with a cocktail program, and Hi Tops' drinks are better than they need to be for this mostly vodka- and beer-drinking crowd. All the cocktails are named for current and former Giants players, their nicknames to be exact, and this one is in honor of pitcher Randy Johnson, who played for the team briefly, in the 2009 season. (And, obviously, the name has some other connotations besides referring to Johnson's tall stature.) This is a Champagne cocktail, a spin on the French 75, with Tito's vodka, St. Germaine, lemon juice, and Champagne. 2247 Market St.

The Juanita MORE! at QBar

Named for drag queen about town Juanita MORE!, who's been throwing a weekly party at QBar called Booty Call for the last seven years, – and who was featured in 7x7 last June – this drink involves muddled blackberries, Jameson, lemon juice, bitters, and ginger beer. It's fruity and a little spicy, like the lady herself. (Runner-up for gayness on QBar's menu would be the Anderson Cooper, which is basically the same as the above but with vodka, and basil added.) 456 Castro St.

This one is probably the gayest of all the drinks on the list, stereotypically speaking, but let's not go there. This spin on the pinkest of 90s drinks, the Cosmopolitan, is a mix of Smirnoff Raspberry vodka, lemon juice, triple sec, and Chambord. And it should probably be consumed with pinky extended, and without additional carbs. 4063 18th St.