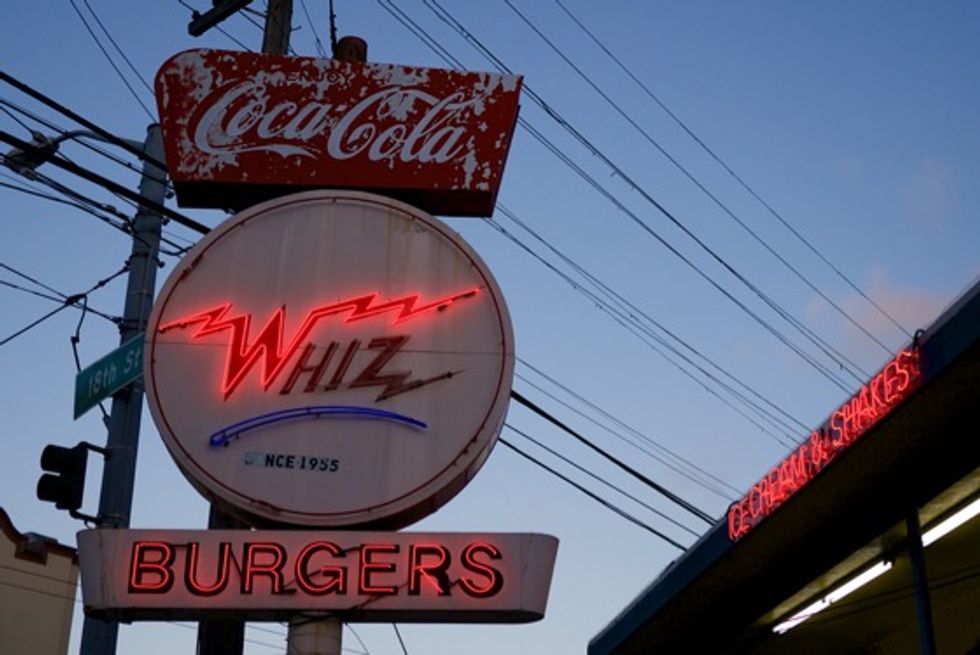 The History of Whiz Burger, an LGBT Landmark

Whiz Burger has made a lot of history over its 60 years in business.

The old-school drive-in at the corner of 18th and South Van Ness remains a fixture in The Mission, serving signature salty and sweet treats—such as the one-third-pound Whiz Burger (with “everything” plus two strips of bacon and avocado on a French roll); fresh banana shakes; and crispy onion rings—through a walk-up window for eating on picnic tables or at countertop barstools. Of the tens of thousands of burgers that Whiz Burger has served, perhaps there was none so consequential as the one served to a city gardener nearly 40 years ago. That man was Robert Hillsborough. His death galvanized San Francisco’s LGBT community, pushing antigay violence into the public consciousness.

Sometime after midnight on June 21, 1977, Hillsborough and his roommate Jerry Taylor stopped by Whiz Burger after an evening of disco dancing. In the parking lot, they got into a heated exchange with four youths who taunted them with antigay slurs. The two men got into Hillsborough’s car while several of their attackers pounded on the hood (or, in another version of the story, climbed atop the car). The roommates drove off, without realizing they were being followed.

Four blocks from their apartment, Hillsborough parked. At 12:45 a.m., four young men pulled up and attacked the pair as they exited their car. Both men were savagely beaten, but Taylor managed to break free and flee with severe injuries. As Hillsborough lay on the sidewalk, 19-year-old John Cordova stabbed him 15 times while yelling anti-gay slurs and allegedly shouting, “This one’s for Anita!” a reference to Anita Bryant, whose successful "Save Our Children” campaign had helped repeal a Dade County, Florida, ordinance that prohibited discrimination based on sexual orientation only two weeks prior.

Neighbors called the police and rushed to the dying man as his attackers fled. Hillsborough was pronounced dead 45 minutes later at Mission Emergency Hospital. The four assailants were arrested later that morning. Cordoba was found guilty and sentenced to 10 years in state prison for second degree murder. Thomas J. Spooner, 21, was charged with murder, but the charges were later dropped. The other two attackers were never charged.

Because Hillsborough was a San Francisco city employee, flags on city property, including one at City Hall, were lowered to half staff. Mayor George Moscone condemned Anita Bryant and California State Senator John Briggs, who had announced a week prior to the attack an initiative to bar homosexuals from teaching in public schools. Days later, SF’s 1977 Pride celebration drew a record-breaking 300,000 people. Thousands marched and piled flowers on the steps of City Hall in memorial of the fallen man.

Hillsborough’s death, now 38 years ago, was one in a series of events that galvanized the gay community to speak up and protest for equality. It was at this moment in history that awareness of the growing violence against LGBT people came to the forefront, and an early chapter in the history of San Francisco Pride Parade—at once a celebration and a rally, a time to focus on the future and to reflect on the past.