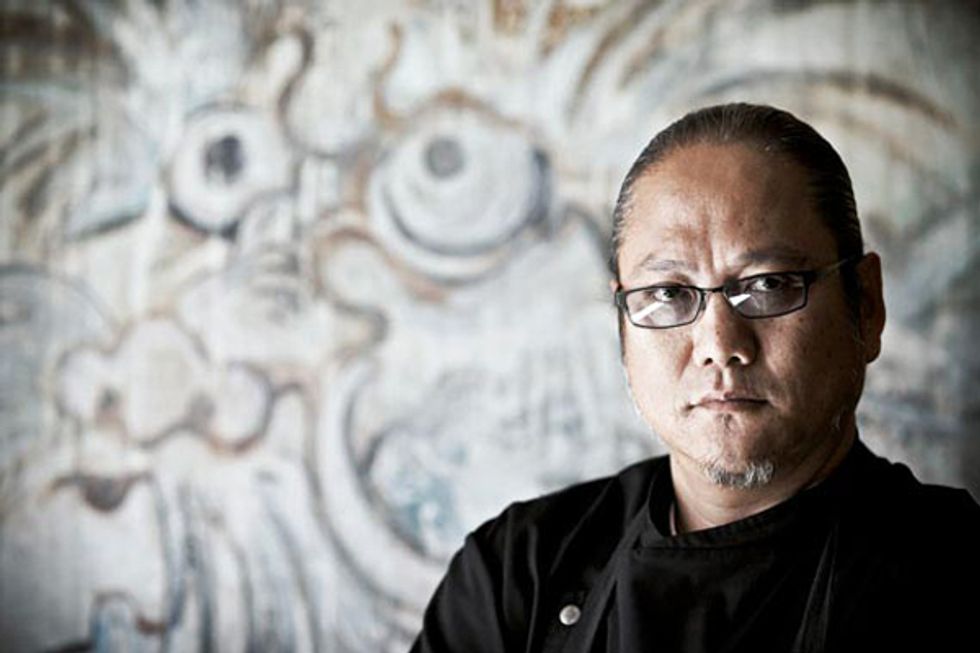 The Morimoto Touch: The Knife-Wielding Iron Chef Turns Napa on Its Head

From the envelope-pushing vegetarian Ubuntu to Neela’s, the Indian restaurant opened by Neela Paniz, the town of Napa is bound and determined to become a dining destination like Yountville. But unlike its popular sibling, Napa is bucking wine country’s typical Eurocentric point of view—most impactfully by the opening of the trendy Japanese-influenced Morimoto Napa. Although Food Network celeb chef Masaharu Morimoto has five other restaurants to attend to, you might spot the 55-year-old at this insta-scene attending to the kitchen in a chef’s coat, homeboy-style shorts, and white sneakers. Surrounded by diners downing sake and pricey sushi, you could easily be somewhere far away, like Honolulu—which is exactly where his next restaurant is headed this fall.

Your food is often labeled as fusion, a word you don’t like. Why not?
The word “fusion” sounds like you can use whatever ingredients together and call it fusion. My food is different because I have a Japanese background.
What California ingredients are you particularly excited about?
Figs are very abundant in Napa and have an unbelievable flavor. One of the dishes I came up with is fig tempura—fried black mission figs served with foie gras peanut butter sauce, house-made pomegranate syrup and house-brewed soy.

Do you subscribe to certain wine pairing rules?
I don’t have any rules. But if I were to drink any wine with sushi, it would be Riesling. It brings out the natural sweetness of a rich fish dish. However, my favorite is sake. It’s a traditional pairing that’s unmatched.


What’s the biggest mistake you’ve made on Iron Chef America?
It was the battle where chili peppers were the secret ingredient. I tasted all of the varieties to find the differences between them, and one of the chili peppers was so hot that I lost my sense of taste for the remainder of the episode.

American chefs tend to overlook the sharpening of their knives. This is a must because you can ruin the texture of the fish you are cutting by fraying its fibers or breaking down proteins for high-quality sushi, for example.

While dining at Morimoto, I kept hearing your chefs shout in unison. Our server told us that the kitchen did this when restaurant critic Michael Bauer walked in.
It was just a coincidence that he was present right as we were beginning the ritual. Sometimes we do it twice, maybe three times, during service. I like to motivate everyone, and it builds camaraderie among the kitchen staff—much like a football team does when they chant together before a game.

Since you’re a baseball fan and former player yourself, who are you rooting for to win the World Series?
I really hope a team that has a Japanese player wins. I am proud of all the players from overseas and support anyone who has made it as far as the major leagues. I would’ve loved the opportunity myself.

If you joined the food-truck craze, what would you sell?

I would do made-to-order hand rolls.  Nothing crazy, because some traditional rolls and ingredient combinations are already exotic to some people.

Best thing you’ve ever eaten?
Tai, the king of white fish, and tekka maki—sushi that I made the first time I was approved to create sushi after completing the training with my mentor.