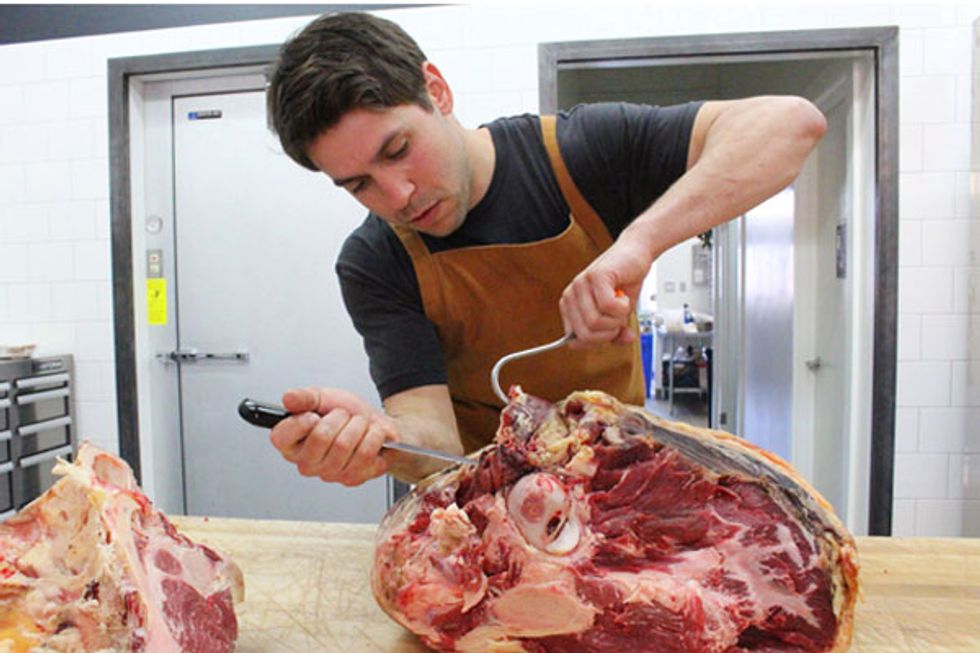 Remember when filet mignon was considered the meat of kings, and charcuterie was exotic? No, you probably don’t. Today’s Bay Area diners are so schooled in artisan meats that nose-to-tail dining is de rigeur, even in home kitchens. Simply witness the boutique butcheries cropping up around Wine Country, where cold cases brim with unusual cuts like bavette, all kinds of offal, and handcrafted salumi. Heck, even the most basic ground beef is prime stuff.

It’s appropriate that the new Thistle Meats is next door to Seared Steak restaurant on Petaluma Boulevard and Washington Street, since beef is big here. Having made its debut this spring, the shop is the work of Molly Best and her business partner, Lisa Mickley Modica. The two adventurous ladies decided to pursue their love of butchery by learning the craft themselves. As a whole-animal butcher shop, Thistle focuses on ethically raised and locally sourced meats, prepared by chef-butcher John Richter. The store also offers CSA butcher’s boxes for delivery, or for an on-site or to-go meal, there are shepherd's pies, sandwiches, soups, stews, broths, and a truly mouthwatering delight: buttermilk lard biscuits.

Owner Adam Parks has a decades-old pastured sheep/cage-free chicken ranch-cum-Christmas tree farm on Gravenstein Highway. A natural pairing, yes? He has been selling boutique meats out of a small shack next to the trees for the last four years. But recently he set up a genuine brick-and-mortar location called the Chop Shop, a USDA certified butchery and retail meat store in The Barlow at Sebastopol Avenue and Morris Street. Beef, lamb, and hogs come from his 135-acre ranch in Tomales. There are Frenched racks of lamb, lemon-sage sausages, scaloppini pork, steaks, bones (for stock or for lucky dogs). All the processing, cutting, and wrapping is done right there, so customers can say exactly how thick they want their steaks.

From celebrity butcher Rian Rinn and his partner Jenine Alexander, this recently opened custom-cut-and-wrap butcher shop on Sebastopol Avenue near Highway 12 is a permanent home for what began as an appointment-only mobile butchery. Beyond being a full service USDA meat processing facility for area ranchers, Sonoma Meat operates as a traditional butcher shop offering whole pigs, charcuterie, jerky, smoked meats, and monthly CSA pickups. For the DIY crowd, Rinn offers butchery classes, sharing tips on cutting up chicken, chopping up hogs, and making your own charcuterie. Hunters rejoice—wild game can be brought in for dismantling as well.

This artisan butchery, one of the first in the country to make meat fashionable, comes courtesy of Taylor Boetticher and Toponia Miller, who wrote the book on charcuterie—literally. (Their In The Charcuterie cookbook has won awards.) At their Oxbow Public Market location in Napa, they host a Butcher’s Happy Hour on the first Thursday of every month, featuring a butchery demonstration alongside wine and beer tastings. Meats are sourced from California producers like Mariquita Farm, Five Dot Ranch, Riverdog Farm, and Stone Valley Farms.

Craving venison, ostrich, elk, bear, or buffalo? Family-owned Bud’s processes local beef, lamb, and pork, but also wild game. Bring your own meat for butchering, or chose from ready-to-buy fresh, marinated, smoked, and frozen meats. Their jerky is wonderful stuff so gnawing is encouraged. Be sure to check out the Bloody Mary beef, which is tri-tip in a special marinade that includes horseradish and vodka.

Since plans were announced in August of 2012, locals have been hoping that Healdsburg winemaker Pete Seghesio will debut his two-story culinary venture at the site of the city’s burned post office. The USDA–inspected butcher facility plans to produce and sell salumi, sausages, steaks, and chops. A deli and wine store will also take up floor space, natch.