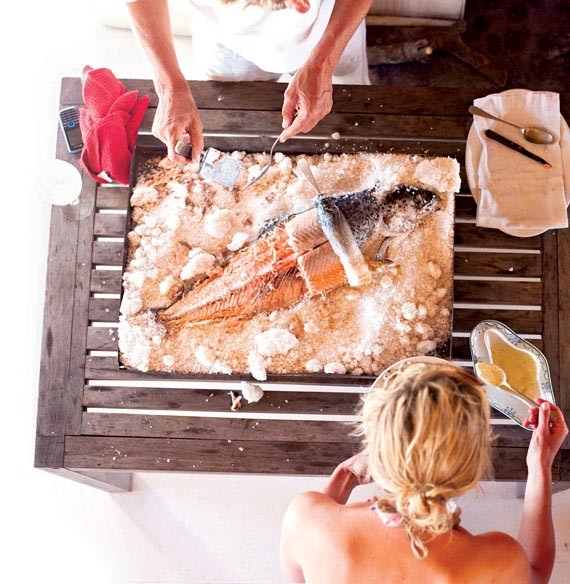 Previous Next
Cap off a day at the beach at La Caracola with a whole wild salmon cooked in salt. 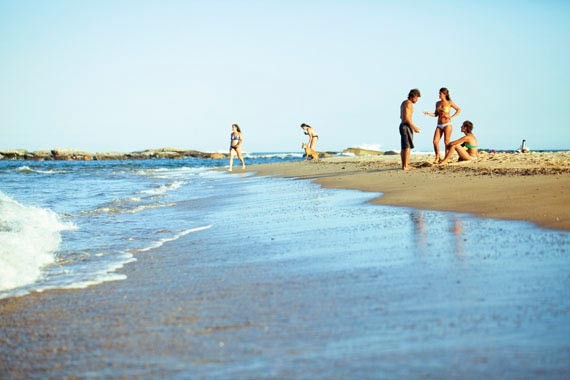 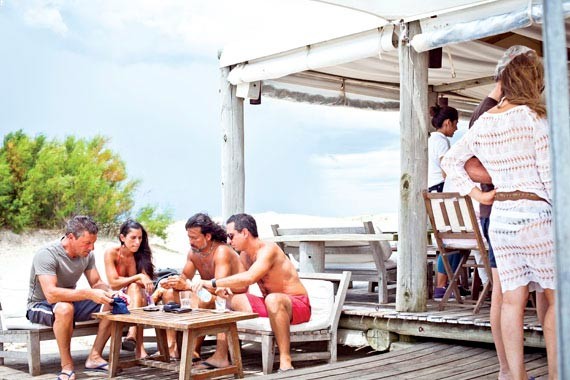 Previous Next
The tiny beach town is easily navigated by its landmarks, including famed restaurant La Huella 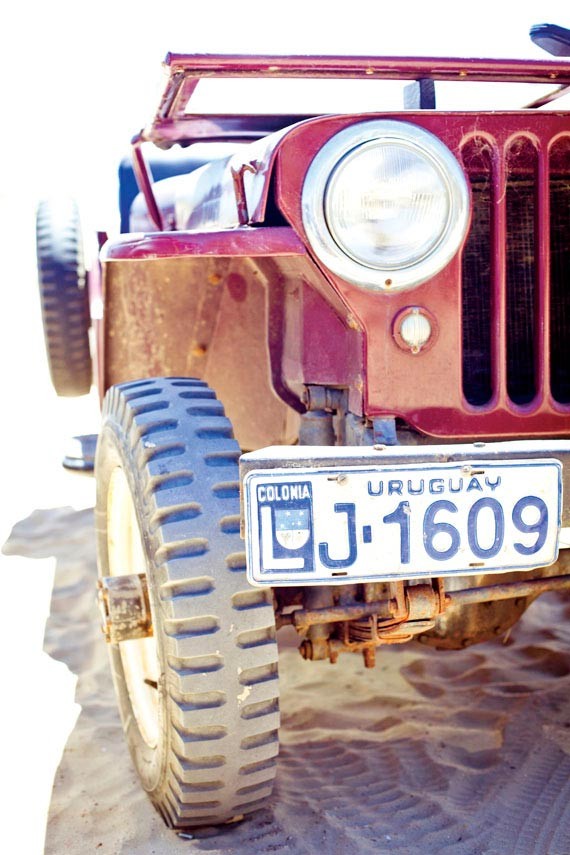 Previous Next
When the road ends in sand, you'll know you've made it. 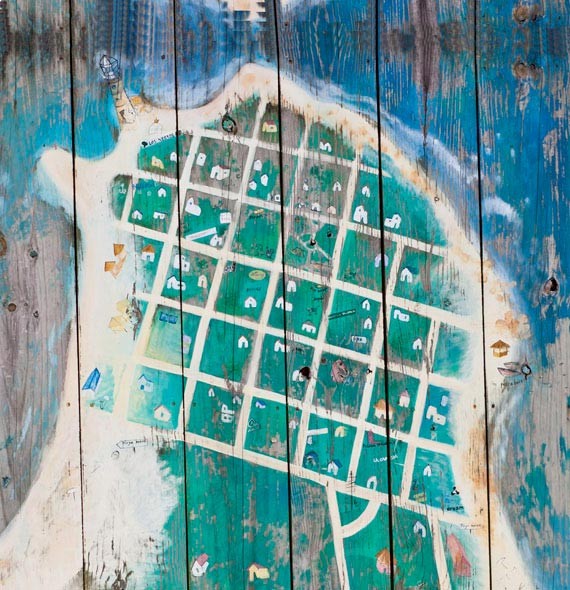 Previous Next
Should you get lost, look for the handpainted map along the side of the road 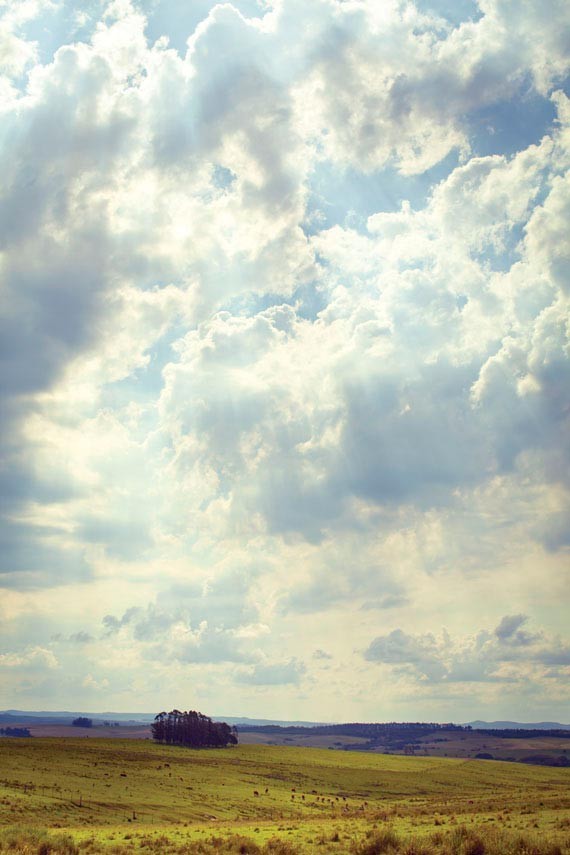 When did we forget how to go on vacation? These days, a week off means an opportunity to do more stuff. From paradise, we Instagram and tweet every last relaxing moment, never escaping long enough to untether from the chatter. What if there were a place somewhere at the end of the world where there is gloriously nothing to do? A warm hideaway that can take you from pasty and stressed to languid and beach-blown in less than a day, where the locals are kindred spirits, the food is sublime, and the vibe so relaxed that you'll spend an extra hour (or three) among friends at the table without thinking of checking your email. There is. It's called José Ignacio, a speck of a fishing village in Uruguay with one of the most famous beachfront restaurants in the world.

En route to the coast from the airport in Montevideo, avoid the quicker Interbalnearia—a four-lane highway streaked with billboards advertising new condo projects and impatient Argentines in BMWs zooming  to Punta del Este. Instead, cruise at a more leisurely pace on Highway 9. The resort town of Punta del Este is worth seeing, if only because the flashy Vegas-meets-Miami mega development with cruise ships crowding the harbor will make you appreciate your final destination all the more. Exit at the town called Pan de Azúcar (Sugar Bread) to get on Highway 9. When you see  the artisanal brick factory, you'll know you're headed in the right direction.

Stout palm trees line the road through this calm, austere countryside. Cows graze on scrubby grass behind weathered stucco farmhouses, and 1950s-era cars rust unhurriedly in the occasional junkyard. The scene reminds me of a bygone California that I've only seen in old photos. If you're driving on a weekend, you'll see people picnicking and drinking mate in lawn chairs on the grassy shoulder, their cars idling on the side of the road. I'm always tempted to pull over. But after an 18-hour flight and a two-hour drive ahead, I'm hungry and on a mission.

When the eucalyptus groves begin to crowd the road, look for the turnoff toward the coast, and relax as Punta del Este becomes a blurry silhouette of high-rises disappearing in the rearview mirror. As it fades, another outline of land begins to appear like a mirage on the horizon ahead. This is José Ignacio.

Surrounded on three sides by the Atlantic Ocean and three tidal lagoons, this tiny peninsula could only be reached by rowboat 30 years ago. In those days, Santa Teresita was the lone restaurant in town, where Doña Nidia served her famous seaweed omelets, and the Artagaveytia family was just opening the town's first bed and breakfast, La Posada del Mar. While there are now more options for overnight stays, those omelets, unfortunately, are reserved for the memory of José Ignacio's old timers. The essence of that mellow village, however, remains intact.

Two seasons from San Francisco, the journey ends where the road stops in the sand. Walk a few steps further, and you'll find a bustling overgrown shack made of wood, canvas, and thatch. This is Parador La Huella (pronounced way-shuh), the most fabled restaurant in Uruguay. Perhaps in all of South America. I first arrived here two years ago to photograph the restaurant's cookbook (La Huella: Stories and Recipes From a Simple Beach Kitchen, October 2013). The owners—Martín Pittaluga, Guzmán Artagaveytia, and Gustavo Barbero—welcomed me with warm handshakes and a cold caipiroska. The tall guy who seems to know everyone—that's Pittaluga. He will welcome you as if he's been waiting for you all day. And you'll believe him. Once a waiter on the Orient Express, Pittaluga later spent a few formative years in Paris before returning to his native Uruguay.

At La Huella, chef Alejandro Morales' cooking is as worldly as it is uncomplicated. For your first meal—trust that you'll return—order the corvina. Split in half and lightly seasoned, the fish is aggressively but perfectly grilled over the hardwood embers of an iron parrilla (grill) the size of a twin bed. A local catch simply prepared, the corvina exemplifies the heart of this beach kitchen. On a busy day, the restaurant will serve more than a thousand people, and it is something to witness the motley bunch of international jet set and Latin American chefs (who come to cook with Morales) that arrives every summer. La Huella is typically packed, but there is somehow always plenty of space to settle into its breezy, sun-bleached corridors.

Even a simple salad with grapefruit, hazelnut and tomato is exquisite.

From here on out, forget your bucket list—just getting here was on it. The point isn't to do stuff. It is just to be. Time is measured by the languid steps that take you from beach to restaurant and back to the beach. In the square, four blocks from La Huella and the waterfront, orient yourself to the six-by-five-block grid that is José Ignacio with the weathered hand-painted map propped up along the side of the sandy road. Head across the square to the cafe-shop Mutate (pronounced moo-TAH-tay), sink into one of the antique couches, and order a tisane with herbs from the garden. By now, you should've picked up on the rustic, bohemian vibe of the town. Drop your bags at Bajo el Alma, a two-room guesthouse connected to Pittaluga's home. The sheets are Egyptian cotton, the fireplace is wood-burning, and the balcony looks east to the Atlantic Ocean.

The owners of La Huella and the fishermen hooking corvina and crab are among the very few people who actually live in José Ignacio year-round. Most of the homes here are summer retreats, modern but tastefully restrained. Some are such masterpieces of ease that I naively wondered about renting one. The BMW X5s and Porsche Cayennes lining the street should have been my first clue. At the height of summer, between December and February, a modest two-bedroom can rent for up to $20,000 a month. José Ignacio has emerged as the destination for wealthy South Americans, but the ones who can afford it seem keen to keep its sleepy vibe.

The village's rise as one of the most exclusive real estate markets on the continent can be traced to the late 1970s, when the Artagaveytias (Guzmán's parents) hired an adventurous but inexperienced chef to cook at La Posada del Mar (now closed). His name: Francis Mallmann. The man who is now well-known for his cookbook Seven Fires, and who is considered to be the visionary father of Argentine cuisine, wistfully recalls when the town had just one rotary phone and fresh water delivery from a horse-drawn cart. Electricity and running water at last arrived and, when Mallmann opened his own restaurant—the five-table Los Negros—beneath the lighthouse in 1993, it quickly became famous for the cooking as well as the prices. Even then, a meal there could easily run $250 a person. But as the dining room filled up night after night, season after season, it became clear that something was afoot in this distant corner of the world.

Though Mallmann witnessed and contributed to José Ignacio's rise, in 2006 he closed Los Negros and retreated 20 miles inland to the once-forgotten town of Garzón. His El Garzón Hotel & Restaurant is a must for a day trip. One of my favorite memories is of taking a joy ride in Guzmán's dune buggy down the narrow, dusty roads that wind into the interior. After an hour, we passed an abandoned train station and pulled into a town that seemed forgotten in time. The pitter-patter of the buggy was the only sound in the air as we did a lap around the square, arriving at a single-story hacienda with a crumbling brick facade. Inside the courtyard, the sense of country and century falls away. In a scene that evokes 18th-century France, guests sit at heavy tables built around the gigantic trunk of a low-hanging palm tree or under a trellis weighted with grapevines. The patio garden blooms with potted herbs that soon find their way into the food and onto your table. A meal lasts hours and rightfully so—some travel halfway around the world just to taste a fresh zucchini salad and grilled rib eye here. It is the ultimate combination of ingredients, fire, and mise-en-scène.

But El Garzón and La Huella are special for more than the personal nature of their food and their familial hospitality. They shine for a vision that fits so naturally with their setting. Nowhere is this symbiosis embodied better than at La Caracola, a small open-air getaway opened by the La Huella crew in 2008 on a narrow sandspit between the Atlantic and Laguna Garzón. The all-day affair—open to 25 insiders who know to ask for reservations (talk to Pittaluga)—is accessible by a 3-mile walk down Playa Brava or a short boat ride across the tidal lagoon. Arrive at midday, and settle into your private canvas tent on the sand facing the ocean. In between swims and siestas, girls in uniform with deep summer tans and sparkling eyes bring cups of gazpacho, goat cheese pizzettas, caipis, and mojitos. Around 6 p.m., there is a call to dinner. Sink into lamb and beef hot from the grill, a whole wild salmon cooked in salt crust, and a dreamy array of greens and wood oven-roasted vegetables, as the sun makes its long, golden descent.

After a few days, you can't walk to a table back at La Huella without handshakes and air kisses from a half dozen people who now know you by name. You might get a beer and a little brown paper bag of fryer-kissed pejerrey (kingfish) caught in the lagoon that morning, a skillet of goat cheese provolone baked in the wood oven, or a slow-braised osso buco to rival any you've ever had. With food so delicious, it's little surprise to find there is a well-traveled path between San Francisco and José Ignacio. Zuni Cafe's Gilbert Pilgram comes here often, and during his tenure as chef at Chez Panisse, David Tanis spent part of his annual sabbatical at La Huella. Chef Morales affectionately recalls the bearded bon vivant posted for days on the open-air second floor with a bottomless bottle of pinot gris, chilling in a beat-up silver ice bucket. “There are only a few restaurants in the world that are truly magical," says Tanis. “La Huella is one of them."

Magical it is. By the end of a weeklong stay in José Ignacio, you've gone amiss if you haven't found the time and space for a few uninterrupted moments with life's simplest pleasures. This being a true vacation, it is your moment to pause, put shape to your dreams and to inspire new ones, and take a break from the constant barrage of this ever-connected life. After a late dinner at La Huella, look toward the lighthouse and gaze at the stars. The constellation of the Southern Cross hangs low in the sky. It may be the first reminder all week that you are very far from home.