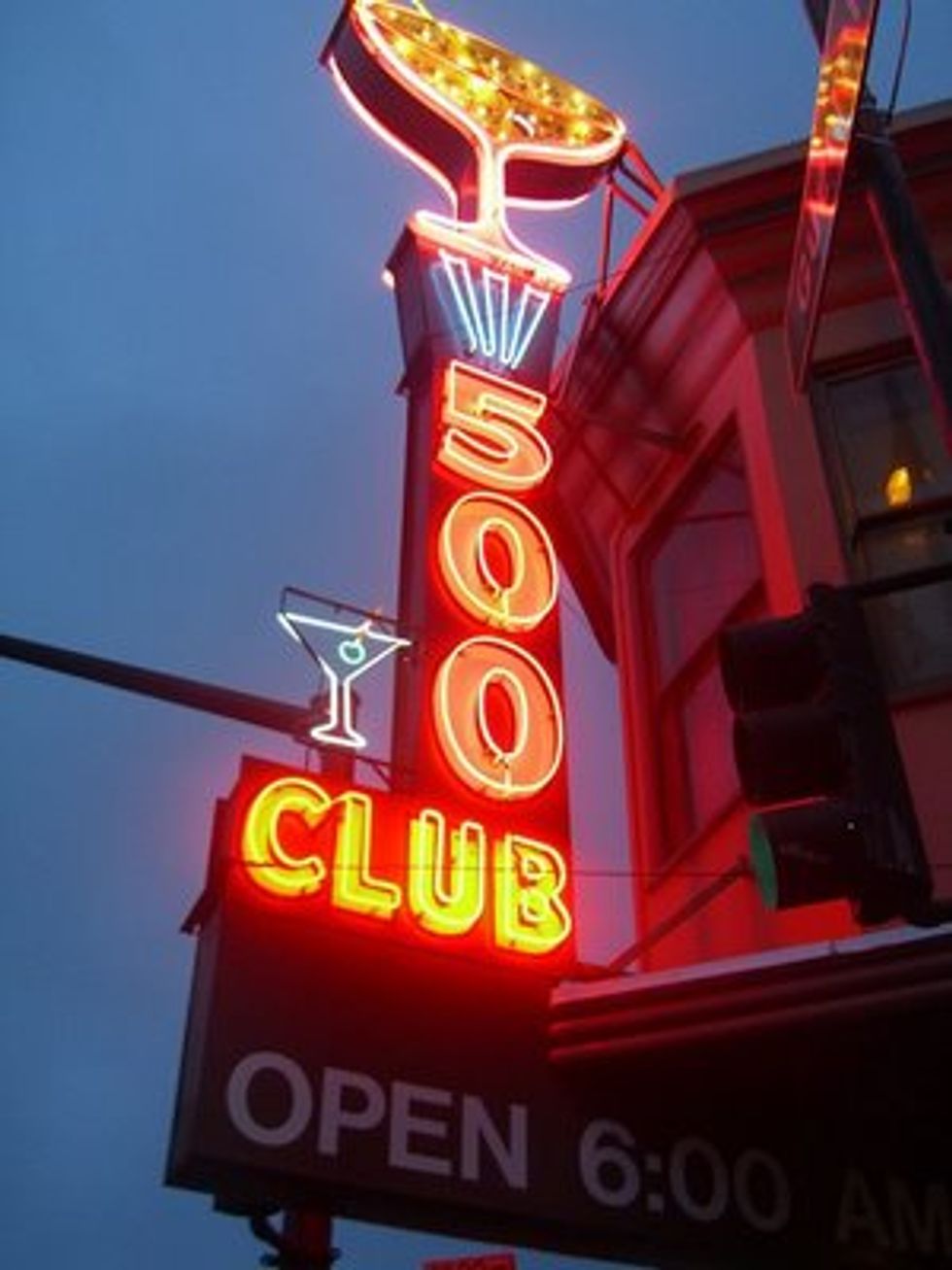 It beckons you. The neon lights and illuminated martini glass call your name. With cheap booze and rambling conversation, it pulls you in. Like a moth to a flame, or rather, a fly to a bar, The 500 Clubsings a sweet siren’s song to all who pass her by. It says, “We are for each other,” and you admit she’s right, popping in for just one drink, which always turns into three.

From one-night stands, to fist fights, to tears in your beers, to spilling your guts to the bartender, The 500 Club is not a dive bar cliché; it’s a trope that’s demonstrative of what a dive bar should be. Anyone who has spent their fair share of time on barstools in San Francisco has at least one story about a night at there. The problem is getting the details correct, since the bartenders have such heavy hands.

I don’t know the whole history of the bar. I wish I did, but I do know that it’s been a solid neighborhood standby for generations. It’s been witness to a neighborhood that has been changing since the Irish were replaced by the Latinos. It’s currently watching the Latinos being replaced by the hipsters, and it will still be there when the hipsters are replaced by the yuppies. Neighborhood bars are often the best way to learn about the area you’re in. You can tell what the neighborhood has been and what it’s becoming just by witnessing the transition from happy hour to nighttime drinking on a Thursday night. Ten years ago, the crowd at 500 was mostly bike messengers, metal-heads, punks, and drunks. Go there now and you’ll see some of the same (especially the drunks) but also smatterings of everything else the Mission is becoming.

There used to be a pool table in the side room which was lorded over by an old man who may have slept on the floor beneath it. I’m pretty sure he came with the building. He had a long white beard, wore some kind of wide brimmed hat, and possibly an orange jumper that you might see trash-picking crews wear on the side of the highway. Truthfully, his physical details are quite blurry because of the aforementioned heavy-handed bartenders, but he was a crazy eyed mainstay of the establishment and always tried to convince you to play him at pool and, of course, buy him a drink. If I recall, he was kinda an asshole, but for those of us who drank at the 500 Club, he was our asshole, and we appreciated him for it. One day a few years back, I showed up to find the pool table gone, and so was old crazy eyes. I always wonder if he’s haunting another pool table somewhere else in town.

Another recent change is that Clare’s Delicatessen and Late Night Kitchen, which opened next door a few years back, now delivers food right to your barstool. This has saved many a person from making poor decisions. This addition kinda turned The 500 Club into one of those perfect storms. It’s now the kind of bar where you can go in solo, and walk out having met a bunch of new friends, eaten a rad sandwich, and gotten wasted, while not spending all your money.

Change is inevitable, even at The 500 Club. Neighborhood demographics ebb and flow, and even pool tables (and the crazy people who sleep below them) come and go. But it’s the important things that stay the same. The 500 Club is still one of the best dive bars in The City and is still a top contender for the best marquee anywhere. So next time you walk by and you feel her whispering in your ear, I suggest you don’t resist. Unless it’s at 6 am. Despite what you think the sign says, they are NOT open at 6am. Trust me on this one.