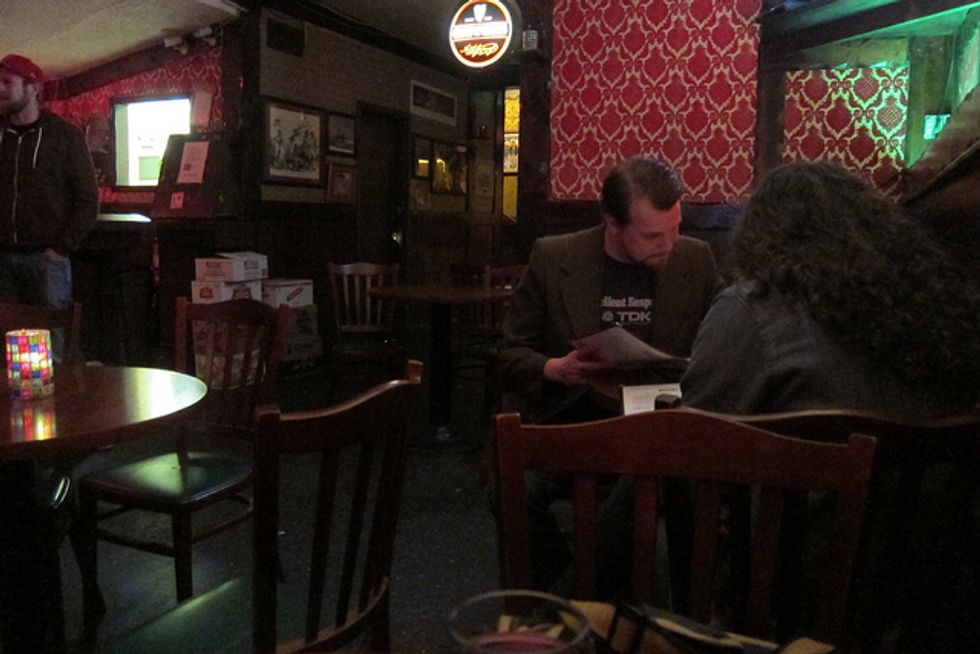 Weekends are for amateurs. Weeknights are for pros. That's why each week Stuart Schuffman will be exploring a different San Francisco bar, giving you the lowdown on how and where to do your weeknight right.  From the most creative cocktails to the best happy hours, Stuart's taking you along on his weeknight adventures into the heart of the City's nightlife. So, who wants a drink?

“People laughed at us and thought we were crazy when we told them we were going to open this place,” Nebiat Tesfazgi tells me as she’s pouring my drink. “Diamonds on the Soles of Her Shoes” is playing from the internet jukebox, the irony of which is not lost on me, as I gaze through Club Waziema’s window at the bright hued lights from the new Bi-Rite across the street. “This place had been boarded up for 20 years before we came in,” Nebiat continued, “We were told the area was unsafe, but we opened it anyways. That was 15 years ago. Now look at the neighborhood.”

I wish I could say a Google bus roared by at the perfect moment to punctuate Nebiat’s comment, but it was nearly midnight last night when Andrew, Lauryn, Mani, Ashley, and I had stopped in for one last drink before heading home. When I moved to the Western Addition in 2004, Club Waziema was one of the few watering holes in the neighborhood other than Fly Bar and The Page (called Chances then). Café Abir was the only coffee shop around, and there were far more stores advertising weaves and hair braiding than there were ones selling antiquated objects like typewriters. It was a time between gold rushes, when you were more likely to overhear a conversation about art and oddities than one about founders and IPOs. Cities are like people in the sense that they are complicated and contradictory and have different phases of their lives. San Francisco just happens to be acting like a spoiled teenager these days, trading out old friends for ones it thinks are cooler.

“This was actually the first bar I came to when I moved to San Francisco,” Lauryn tells me, “It was the weekend of the first Outside Lands and we either ended up here before or after the concert, I don’t remember.” Actually, it’s I who don't remember whether Lauryn said it was before or after the concert. I’d gotten distracted by the red paisley velvet wallpaper and the white ceiling with light-reflecting gold sparkles that are leftovers from when Waziema was a jazz club in the 1950s. Back then it was called Club Morocco, and as it was part of the Fillmore jazz scene, affectionately called the Harlem of the West, the spot saw performances from such legends as Billie Holliday, Marvin Gaye, and Tina Turner. When Nebiat and her husband opened it as Club Waziema in 1998 they kept the original vibe but augmented it by serving food from their home country of Ethiopia.

A few months back, a bunch of us had congregated at Club Waziema for Ethiopian food and drinks in honor of Lauryn’s birthday. Instead of Nebiat being behind the bar like she so often is, there was a young man who looked remarkably like her. I figured it was her son and when I asked him about it, he confirmed my suspicions. His name escapes me now, but I remember that while he’s currently studying at SF State, he grew up in the neighborhood and occasionally works at the bar to help out his mom. I enjoyed shooting the shit with him, and mentioned it to Nesbiat last night when we popped in. I told her that her son and I chatted about the immense amount of change the neighborhood has seen in the past few years and she laughed and told me, “A few weeks ago a woman who’d been bar hopping around Divis walked in the door, looked around and said, ‘Thank god! Finally a real fucking bar!’” Nesbiat and I smiled at each other because we knew exactly what she meant.