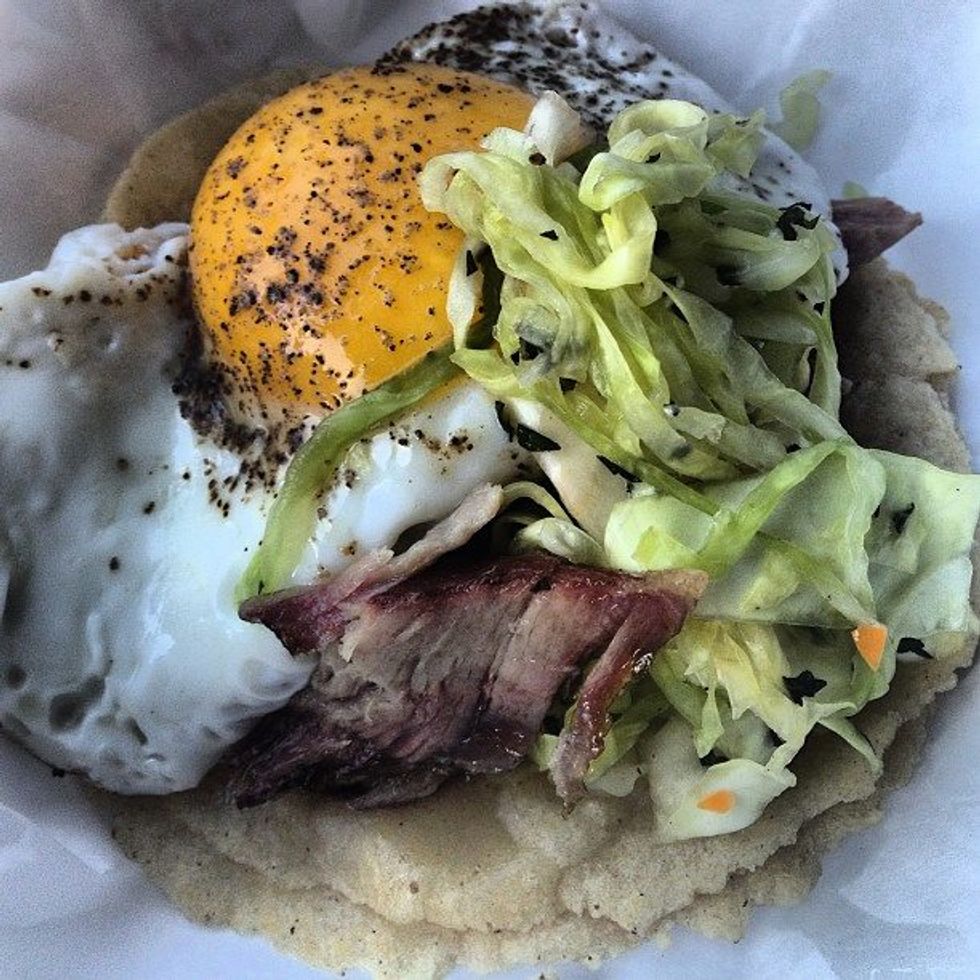 Three Pop-Ups You Really Need to Check Out

There is no shortage of talented folks cooking up flavor-packed food in random locations all over the city (that’s how we roll in SF), but sometimes it’s hard to keep track of who’s doing what and where. Here are three pop-ups you should definitely add to your hit list if you know what’s good for ya.

Have you sunk your choppers into the creative tacos by Joshua Wilder Oakley—he of the significant mustache—at local bars like Dalva and Rye? If not, you better get on it. And now Oakley is starting a brunch series at Dear Mom on first Saturdays. Not only can you try his famed Flaco’s tacos (Saturday will feature Bloody Mary–braised pork on a bacon fat tortilla, or vermouth baked beans on an olive oil tortilla), but there will also be Huevos Stacheros (two sunny side–up eggs over a pile of either bacon fat or olive oil tortillas, plus vermouth baked beans, crispy pan-fried ham, whiskey-pickled jalapeños, and cilantro gremolata). And then there’s the bacon-stuffed buckwheat waffle with fried duck egg, maple syrup, and fresh strawberries. Yeah, giddy up. 11:30 am–3:30 pm. 2700 16th St. at Harrison.

Mmmmm, sandwiches. Over in Hayes Valley, the newly open Noir is now hosting a breakfast and lunchtime sandwich pop-up during the week called The LunchPad. Sandwiches range from hearty egg sandwiches to an Italian beef to the A-Bomb (roasted turkey with habanero candied bacon, pepper jack cheese, lettuce, tomato, red onion, and a smoked pepper aioli). They also serve Marla Bakery pastries and Contraband coffee; hours are Mon–Fri 8 am–2 pm. You can keep track of LunchPad specials and more on Twitter. 581 Hayes St. at Laguna.

It’s no newsflash that this town loves to do brunch. So if you want to add something new and totally delicious to your roster, be sure to check out baker Amy Brown and Joe Wolf’s offerings at Marla Bakery at State Bird Provisions three Sundays in May: the 12th (which is Mother’s Day—read more here), the 19th, and 26th. Brunch will be served 11 am–4 pm, with a rotating menu of items like rye toast with tea-smoked sturgeon and a “Mr. Croque," plus egg dishes, housemade yogurt, and lots of baked goods that will rock your house. 1529 Fillmore St. at Geary.