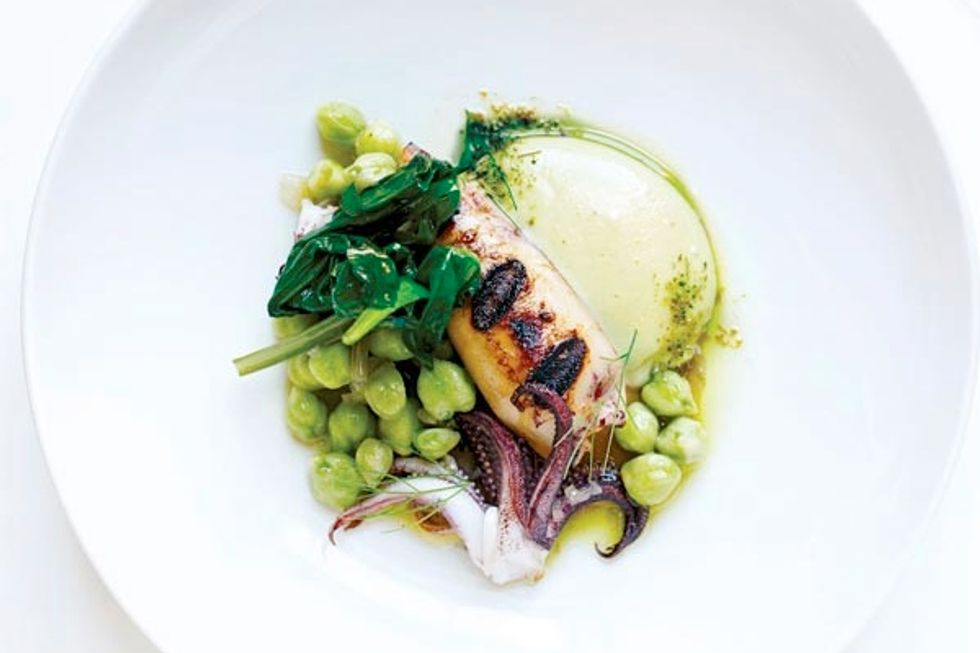 As Traci Des Jardins would drive over the Golden Gate Bridge en route back into San Francisco, she’d gaze upon the Presidio’s thick forests and wonder how that dramatic plot of land, now a national park, came to be. As she devised the concept for The Commissary, her brand-new restaurant housed in the former army post’s main barracks, she was inspired by its history as a military settlement originally established by Spanish conquistadores in the 1800s.

(Left) Traditional Spanish olive oil cake gets a refresh with almond, citrus yogurt, and twirls of candied rhubarb. (Right) Chef Traci Des Jardins with culinary director Robbie Lewis and executive chef Reylon Augustin, will run the show at The Commisary and Arguello, the upcoming Mexican restaurant in the nearby Officer's Club.

“The American military didn’t resonate, so I wanted to search for something that had meaning in that location,” says Des Jardins. And while the former mess hall is riddled with historic memorabilia, such as a well-tooted bugle, tin light fixtures salvaged from a nearby army gymnasium, and portraits of soldiers in uniform, the food focuses on the Spanish influence on the area, utilizing native provisions also found in southwestern Europe, which has a similar climate. “Products that are seasonal, like sardines, anchovies, and clams, create the bridge between Spain and San Francisco,” she says.

The Sand & Fog (scotch, sherry, eucalyptus, nettles) is the essence of the Presidio in a glass.

A dish of grilled local squid stuffed with house-made pork sausage is a verdant explosion with its bed of bright-green garbanzo beans and crown of charred ramps. Roasted chicken defies comfort-food expectations because it’s topped with a sauce of caramelized shallots and sherry and a tasty tumble of almond-and-date-studded frisée (for good measure, there’s sumptuous chicken liver toast on the side).

The soapstone counter seats surrounding the open kitchen put patrons at the center of the mise en place.

Such meticulous offerings are somehow more delicious when viewed in process from front row seats at the soapstone chef’s counter, which surrounds the open kitchen. “I love interacting with the guests,” says Des Jardins, who glides around the perimeter, dispensing charm and star power to patrons. “There’s an entertainment factor at the counter for sure, but it’s also welcoming.”

The former mess hall of the Montgomery Street Barracks, built in 1895, now serves as a cornerstone for the Presidio's new culinary life.

Not even a week after opening The Commissary, the chef announced her next Presidio eatery, Arguello—a sit-down Mexican concept that will be housed in the former Officer’s Club (arguably the oldest building in the city). “All the right pieces are falling into place,” she says. Consider it a friendly takeover.