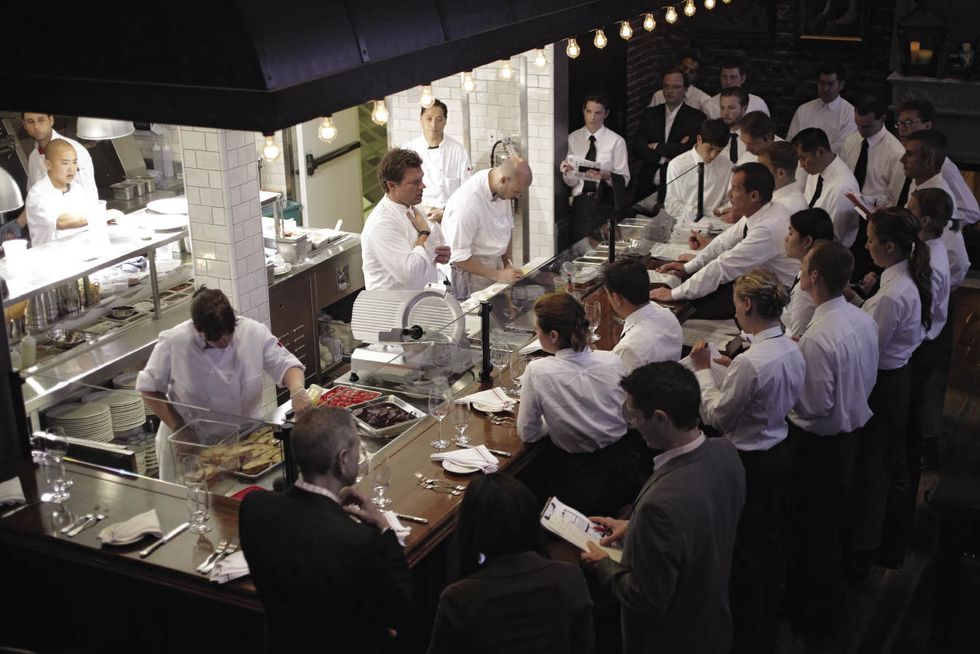 It’s possible Tyler Florence has something to prove. True, the chef has written five—soon to be six—cookbooks, starred on the Food Network for the last 14 years, launched a line of baby food (called Sprout) and opened The Tyler Florence Shop, where he sells his eponymous cookware and other preferred products. But never mind that: This is the summer that the New York transplant—who moved to Mill Valley in 2007—opened his first restaurant, Wayfare Tavern, in the former Rubicon space in the Financial District. It’s one of three spots he plans to launch this year (the second is El Paseo, in Marin, which he’s opening with Sammy Hagar; the third is Tyler Florence’s Rotisserie & Wine, in downtown Napa, which debuts later this month). We know that Florence is a marketing genius, a charmer and a preeminent food personality. Now, at long last, he tries his hand at running a restaurant.

Burgers, buzz and an impressive makeover of the former Rubicon space.

Since opening Wayfare Tavern two months ago, Florence has hardly left the kitchen, despite the fact that he hired Mike Thiemann as executive chef. The menu is full of the simple food that is Florence’s hallmark—a chicken paillard piled high with arugula salad, a proprietary-blend burger with bacon and Mt. Tam cheese, a Hangtown fry—dishes so straightforward even the waitress admitted, “You’re not likely to find anything unfamiliar here.” The menu pledges local allegiance, of course, both to farmers and producers as well as to Florence’s adopted West Coast food community (evidenced by a first course, listed on the menu as “Figs on a Plate,” a reference to New York chef David Chang’s assertion that chefs here take great ingredients and do too little with them).

But there’s an equal and opposing indication of East Coast influence. The space, for example, the all-day menu (not to mention the menu’s design) and the raw bar are all reminiscent of Keith McNally’s popular Soho hangout Balthazar. Balthazar was intended to evoke a French brasserie, whereas Wayfare is shooting for a replication of a classic eating hall that’s more in the American tradition—and the pewter tableware, the eagle logo (influenced by the design of the dollar bill, it adorns both entryway and plates), the taxidermy and the library-cum-billiards room all help set the scene.

As at Balthazar, food is only part of the equation. The three-story restaurant has been packed since opening with equal parts curious food lovers there to size up Florence, as well as diners who only be characterized as groupies, who beg Florence to pose for a photo. Never one to disappoint his fans, he dutifully wraps his arm around strangers, releasing his mega-watt smile. But in order to make Wayfare a continuing success, he’ll have to take care to make sure the flash is on the plate.