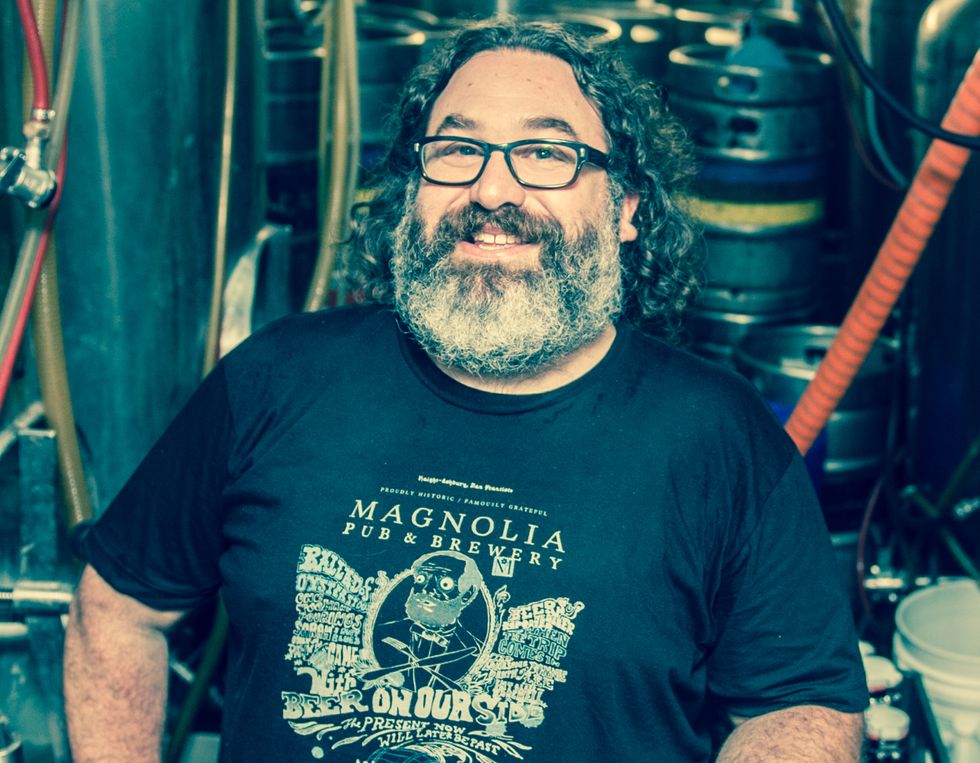 We Wanna Be Friends With: Dave McLean of Magnolia Gastropub & Brewery

Our city is chock-full of interesting people and wild personalities. Overwhelmed by the coolness? Every week we'll pick one standout local we'd love to be friends with to answer seven essential questions about their life in San Francisco.

Dave McLean's official professional title is "Brewmaster." We'll give you a second for the coolness of that to sink in.

Brewmaster Dave is the man behind Haight Street's beloved Magnolia Pub & Brewery, The Alembic Bar, and the forthcoming Magnolia brewing facility/BBQ joint expansion project coming to the Dogpatch. Slated to open in the fall, the project will hugely expand Dave's craft beer brewing empire. The new facility will churn out about 7,000 barrels per year, while the Haight location will continue to produce its maximum of 1,000 barrels, but will now focus on more experimental and small batch brews.

On the BBQ end of things, Dave brought in Namu Gaji's chef-owner Dennis Lee to create "non-denominational" BBQ, including meat by the pound and a variety of sides. Just in case "meat by the pound" isn't enough of a draw, they'll also have a 60-bottle whiskey collection and cocktail menu.

When talking about the combo of beer, barbecue, and whiskey, Dave said he chose the trifecta because, "Each is a kindred spirit not to be rushed." Who wouldn't want such a wise man and truth-teller to answer our We Wanna Be Friends With Q&A?

1. What neighborhood do you currently call home? Would you ever move or are you happy in your 'hood?

Cole Valley. I've lived in the Haight or Cole Valley throughout my entire time in SF and it feels very much like home. I'm very happy about that and wouldn't change a thing.

2. What's your hands-down, absolute favorite thing to eat in SF?

We have such an overwhelming abundance of amazing food that I'm not sure I can pick one. If I do, it might change tomorrow. That being said, I do love the burger at the 4505 Meats stand at the Ferry Building. A dozen oysters at Zuni has been a pretty timeless source of enjoyment over the years, too.

3. What's your perfect night on the town?

It would start with a great beer or cocktail somewhere strategically placed near the dinner that would follow, segueing into live music at a favorite venue. A nightcap at Alembic doesn't sound like a bad idea, either. It's a short walk home from there.

4. When you need a low-key afternoon, where do you go for down time?

I can't remember, which means I definitely need one. I like grabbing an afternoon beer, outside if the whether is nice. Biergarten is perfect on a nice day. An off-peak, afternoon trip to a relatively quiet Toronado has also served me well for that purpose. I also like walking up to Tank Hill or through Sutro Forest.

5. What's your favorite place to go on a day trip from the city?

The Marin/Sonoma coast, for sure. I got married on Drakes Beach and love Point Reyes and everything around it. It's pretty much the default local getaway spot for my wife, daughter, and me, involving hiking, a beach, and great food.

I'm going to say bike, which is really wishful thinking, because I drive too much.

The Independent or the Fillmore?

Fillmore–you're asking a Deadhead, after all.

7. Three words that describe your life in SF?