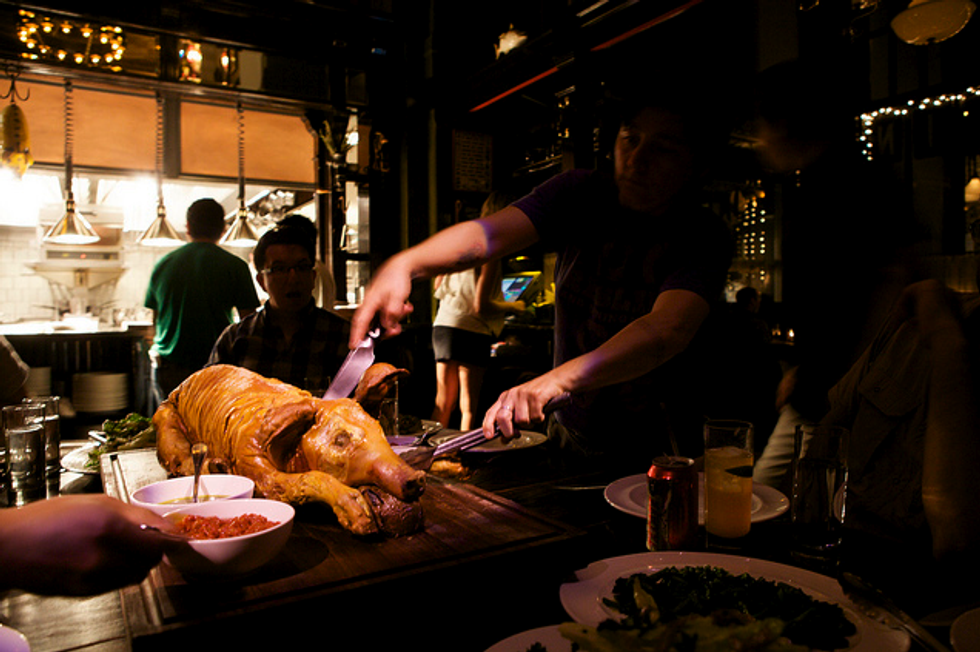 What NY Restaurants Can Teach You About SF

As you might know, I was in NYC last week on an eating binge. My hit list:

My takeaway? I have more than a few thoughts, but these are worth sharing. Or not. You tell me.

1. The whole locavore/sustainable movement in restaurants is no longer fringe in NY—which, in New York terms, means that Jean-Georges has turned this idea of eating into one of his many high-end concepts: ABC Kitchen (at ABC Carpet & Home). As New York magazine puts it, there's a lot of barnyard chic going on. Or "Jean-Georges meets Hee Haw" as Adam Platt quotes one of his dining companions. We didn't eat there, but I kept hearing people raving about it.

2. Mario Batali's Eataly? My mind still reels. Food courts (see also Todd English's Food Court) are clearly the next new thing based on their success in New York. Personally, I don't like eating with mobs of people milling around me. Or doing really expensive and perfect but soulless grocery shopping. It's just not for me.

3. Hotel restaurants in NY are everything right now. Chef darling April Bloomfield's second restaurant The Breslin, located in the trendy Ace Hotel, might have been the biggest scene I've ever witnessed. As we were lead up the stairs through throngs of people, we passed a big table where a suckling pig, sitting in a spotlight, was pure carcass and carnage. A scene out of a movie. (P.S. My 9-year-old son just saw the above picture and said, "Poor doggie!") Not to mention, who knew that 20-somethings had upwards of $30 to blow on entrees of beef tongue and trotters with fried squash? But I'm not sure anyone there was actually paying attention to the food, which was a quirky mish-mash spiked with her signature offal. But New Yorkers love a good scene. Can't deny them that. It's something that makes the town go.

4. New York restaurants know how to create a mood. Low-lighting, candles, Edison bulbs. While SF restaurants seem to be focused on light and airy and windowy, New York does dark and cozy like no other. Which is funny because it's colder here than New York half the time. New York also does decrepit chic well. See The Breslin, Pulino's (check out the cool bathrooms—a good shopping break should you need to go) and more for a taste of that. Modern is so over. The more peeling paint, the better.

5. Ippudo: The only state-side restaurant of this 35-strong Japanese chain. The noodles were perfect little springy things. But the broth didn't deliver the mind-blowing ramen experience I was ready for. Maybe I'm comparing it to a that perfect bowl I had in Tokyo and maybe that bowl was perfect because I was in Tokyo and it was raining and we were outside the fish market. Maybe my expectations were too high. But that's what happens when Yelpers write that they're having a "mouthgasm just thinking about" Ippudo ramen. Richie, you may now speak your defense.

6. You can take the girl out of SF but you can't take the SF out of the girl: I learned this by dining at Northern Spy Food Co., an unpretentious little spot in the East Village started by former SF chefs Christophe Hille (A16's original Nate Appleman), Nathan Foot and Chris Ronis. The menu here is SF-simple, the food bright and fresh with a little pizazz. Clearly, it spoke to my California heart: a bowlful of squid and mussels with cripsy bits of popped wild rice and beans, a great farmers' market salad … Funnily (or maybe obviously) enough, it might have been one of my favorite meals.

7. One dish can make a restaurant. Despite my food editor conscious telling me that I should only go to restaurants I'd never been to before, my stomach told me to go back to Momofuku on our last day in the city. There's a reason David Chang has been deemed a genius and honestly, it might be as simple as his pork buns. Big, perfectly cooked slabs of pork belly, the pickled cucumbers, the sweet hoisin sauce an the soft sweet buns—add a little hot sauce to the whole thing and you have hit every taste bud. They are perfection. Especially with a nice cold beer.

8. New York makes me tired. Reservations are de classe these days so you often wait for an hour to eat. I've decided a three-night stay is the perfect amount, especially if you're eating like there's no tomorrow (and I didn't even get into the shopping—that's a whole other story and a story where, in comparison, SF loses hands down). As much as I love being there, I'm glad I'm home.