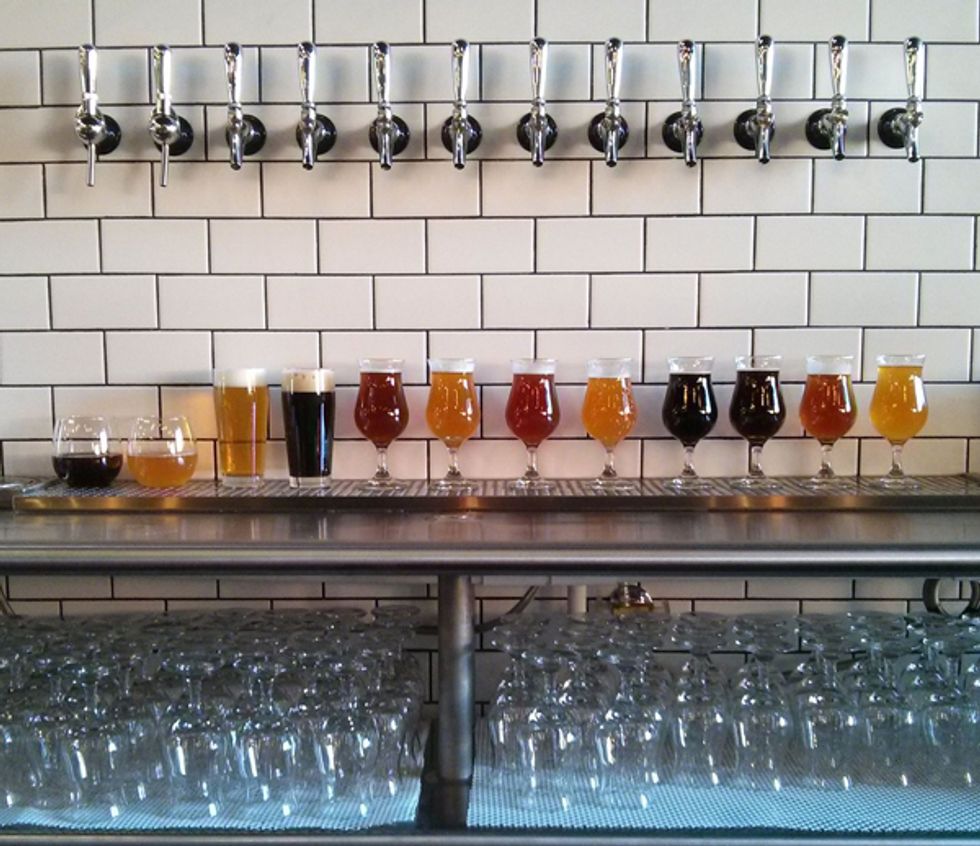 If your East Bay pals haven't already drilled this into you, you should know that there are plenty of reasons to head to Oakland and Berkeley to eat these days, and/or plenty of reasons to be happy with your dinner once you've been dragged over there for a baby shower, or similar. Check out seven fairly recent additions to the drinking and dining landscape over there, should you find yourself on the other side of the bridge after nightfall.

The former Punchdown has been transformed into a wine bar and bistro called 2212, from owners Sam Patel and Paul Fitzpatrick. Food options are pretty simple, with things like a croque monsieur and a charcuterie plate to acommpany your wine, and there's a focus on affordability with most glasses priced under $10. 2212 Broadway at West Grand, Oakland.

We've mentioned before the latest exciting project from chef-owner James Syhabout (Commis, Hawker Fare), and this new Rockridge spot is going strong so far. They serve their fried chicken with raw oyster mayonnaise and their poutine with blood pudding on top, so this is a place for foodinistas with rich and varied palates. Plus, there are solid cocktails. 5912 College Avenue, Oakland.

Pizza freaks should add this one to their list: The purveyor of the Fist of Flour mobile pizza operation finally has a brick-and-mortar home in the Laurel District, serving up some pretty excellent pies from gas-fired, stone-deck pizza ovens. Specialties include the Funghi Deluxe, with criminis, spinach, garlic, tomato, fresh and aged mozzarella and arugula; and the Protesto, with Yukon Gold potato, arugula pesto, provolone, fresh & aged mozzarella, and sundried tomato. They're operating on limited hours for now, Wednesday to Sunday from 5 to 9 p.m. 4166 Macarthur Blvd., Oakland.

Former Yoshi's chef Sho Kamio recently opened this labor of love, solo show to some early rave reviews. It's sophisticated, modern Japanese food with his idiosyncratic flair, and the name is a reference to the healing of his home region of Sendai, Japan, which was devastated after the 2011 tsunami. 1830 Fourth Street, Berkeley.

Taking over the former Nan Yang space as of a couple months ago is this new, modern Chinese restaurant from Michael Chiang and chef Julia Klein (Terra). The menu keeps things pretty simple with dishes like shrimp toasts, dry-fried chicken wings with Sichuan peppercorns, and ma po tofu, and a few larger plates like 5-spice shortribs with kabocha squash. Also, there's a full bar and some other Asian influences popping into the noodle section with things like pho and Korean-style ja jiang mein. 6048 College Ave., Oakland.

Chef-owner Charlie Hallowell (Pizzaiolo, Boot & Shoe Service), has just opened this spot on Grand Avenue, marking his most ambitious restaurant to date. Like at his other spots, there's a decent cocktail program, and the menu is divided into a few sections, with crudos, fire-grilled meats and vegetables, and flatbreads as the focus. Bauer just gave it a qualified thumbs up. 3311 Grand Avenue, Oakland.

This much anticipated (amongst beer geeks at least) new sour-beer brewery has just popped on the scene. It's a project from a father-son team, with the son, Jay Goodwin, bringing an ardent passion for sour beer back from a stint working at The Bruery in Orange County. Right now the tasting room is only open Fridays from 4 to 10 p.m. and Saturdays from 2 to 10 p.m., and they're serving seven house sours with cheeky names like the SKUs Me, and Wise Guise -- a play on geuze, which is a type of red sour beer from Belgium. And to go with your beer, they're serving a couple of paninis -- turkey and pesto, or apple and cheese. 940 Parker Street, Berkeley.