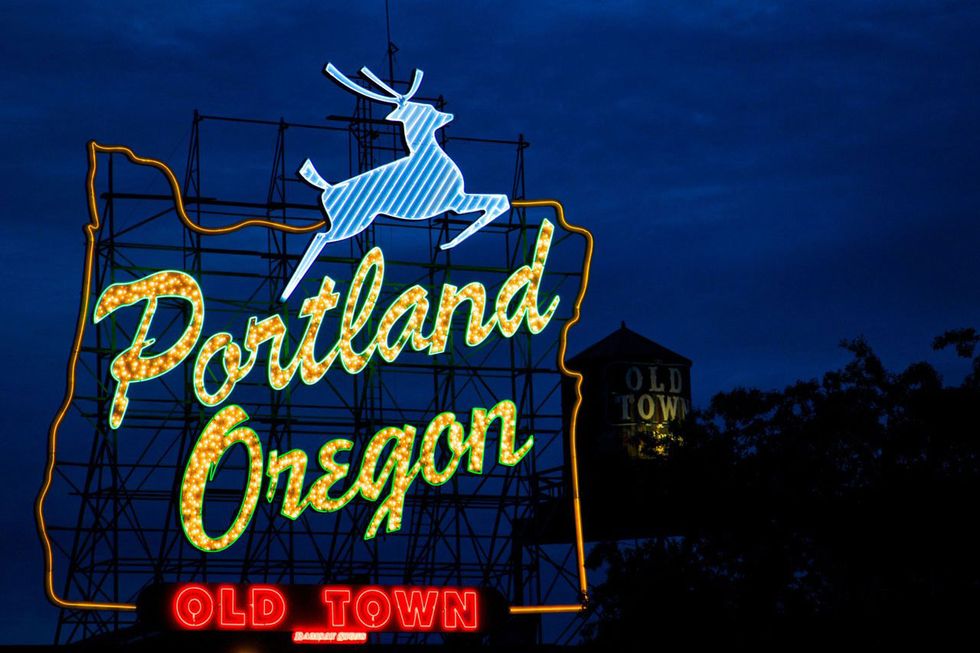 A Modern Guide to Portland, Oregon

Is Portland the new San Francisco? With the rate that our Bay Area friends are transplanting to the rainy city, it might seem that way. But even if you're not interested in a life of tax-free shopping sprees, Portland is a pretty rad place to check out, if only for a weekend. Packed with craft brewers, a delicious brunch scene, and one of the greatest book stores this side of the Mississippi, here's what to do on your next trip to PDX.

If the first thing that you want to do in Portland is "put a bird on it" then you must stay at the Hotel Monaco. This luxe hotel comes with a strong 70s vibe (just look at that purple plaid bedspread!), amazing happy hours, and the most picturesque bird wallpaper—perfect for taking selfies. Rent bicycles from the hotel garage for a pretty ride along the Columbia River Gorge, but be sure to be back in time for complimentary pre-dinner beer, wine, and snacks in the chic lobby, which also boasts an enormous Jenga set. //  506 SW Washington St, Portland, monaco-portland.com

Looking for something a little more modern? Hotel Lucia will treat you right. This chic boutique hotel right in the heart of downtown boasts clean lines and crisp white sheets, just begging to be jumped into after a long day of tax-free shopping. Our favorite part? The classy black and white photographs of American royalty— from a young Hillary Clinton to Jimi Hendrix—lining the hallways. // 400 SW Broadway, Portland, hotellucia.com

BYO flashlight, Pepe le Moko is one of the coolest cocktails lounges we have ever had the pleasure of stumbling into. The street-level entrance to this underground haven reveals only a teeny tiny prep kitchen (where a gal was unceremoniously prepping oysters next to a hostess stand), before you're led down a dark stairway to a small lounge with only ten tables. Once your eyes adjust, you're in for a sexy, low-light experience. Opt for a classic daiquiri or negroni—both are perfection.  // 407 SW 10th Ave, Portland, pepelemokopdx.com

When in Portland, do as you would normally do, and brunch hard. Thankfully, you're already well prepared for the kind of establishment that keeps a steady line out the door (even before opening hours). But do not be deterred. Tasty n Alder is must-eat dining when in Portland. The potatoes bravas are amazing, as is the Bim Bop bacon and eggs. If you're going big (And why not? You probably have a lot of walking ahead of you) also consider the pork schnitzel and biscuits and gravy. Want the fare without the wait? Try coming back for dinner. It's equally as delicious. //  580 SW 12th Ave, Portland, tastynalder.com

For comfort food the way grandma used to make, head to Mother's. A consistent restaurant choice for celebs including everyone from President Bill Clinton to Led Zeppelin’s Robert Plant and recently Ziggy Marley, order the bottomless mimosas and a breakfast burrito and settle in for a leisurely meal of people watching. // 212 SW Stark St, Portland, mothersbistro.com

You could wait in line for the infamous box of assorted Voodoo Doughnuts (and if you've never been to Portland before, then you absolutely should), but when the locals get a craving for sweets they head to Blue Star. Known for their brioche-style gourmet donuts "for grown-ups," look out for flavors such as blueberry bourbon basil, hard apple cider fritter, as well as horchata-glazed, maple bacon, Mexican chocolate, and the classic cinnamon sugar-dusted. Owners Micah Camden and Katie Poppe use sustainable bread flour, European-style butter, whole milk, and local cage-free eggs for their confections— so they're pretty much guilt-free snacking. // 1237 SW Washington St, Portland, bluestardonuts.com

In terms of sheer information, there's no place like Bailey's. Gone are the days of hastily scribbled chalk boards at bars, this ultramodern tap room displays its menu via screens, showcasing ABV, origin, and even how much is left in the keg in real time. Go ahead and try a local brew, or four. // 213 SW Broadway, Portland, baileystaproom.com

Founded in 1892, the Portland Art Museum is one of the oldest art museums in the United States and the oldest in the Pacific Northwest. That means it's had more than 100 years to perfect its collection of 42,000 art objects ranging from ancient times to today. Known for its distinguished collection of native peoples of North America, modern and contemporary art, Asian and American art, photographs, prints, drawings, and English silver— there will be so much to Instagram, who won't even know where to start. // 1219 SW Park Avenue, portlandartmuseum.org

Started by two record-store employees who loved classic arcade games, Ground Kontrol is every gamer's fairyland. There are over 60 classic video games and 27 pinball machines, as well as a full-service bar (after 5pm), and throughout the week they play host to DJs, comedy shows, trivia nights, game tournaments, and Rock Band karaoke. Is Pac-Man isn't enough to draw you in, the purple neon should do it. //  511 NW Couch St, Portland, groundkontrol.com

A book-lovers paradise, we're not ashamed to say that we always go to Powell's more than once during our stays in Portland. And while we could rave about this "city of books" (occupying more than an acre of retail space and with an inventory of more than 4 MILLION books) you really just have to go there yourself to feel the magic. // 1005 W Burnside St, powells.com