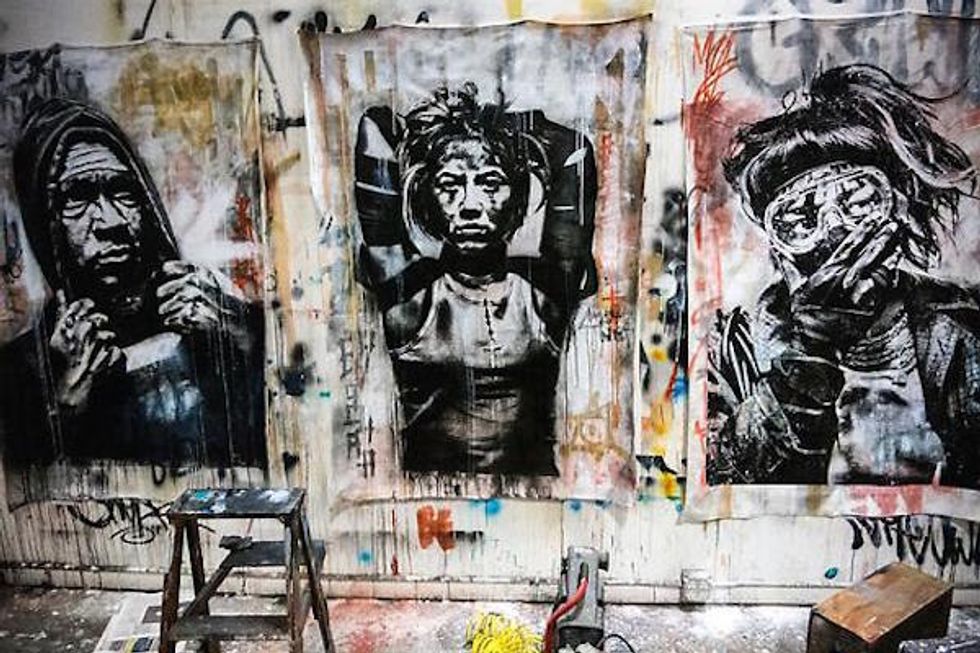 No walk or bike ride around San Francisco is complete without a bit of rubbernecking to scope out the many vibrant murals that brighten up our city's streets. Learn the names of six of our favorite Bay Area artists who are awakening the streets of SF and beyond.

"Who the fuck is Eddie?" is the question that leads to the online bio of this well known street artist and stenciling master, whose work has an immediate sense of urgency and a profound political approach—it's no coincidence that the CCA masters grad, who began incorporating images of Barack Obama in his street art during the 2008 election season found himself part of the Manifest Hope art show at the 2008 Democratic National Convention and at Obama's first inauguration. Colla has shown his work everywhere from ArtPadSF to Art Basel Miami to Google. He is currently curator at lOAKal gallery in Oakland and also curates for other Bay Area galleries.  //  eddiecolla.com

Luncheon With the Unknown (2015, oil on canvas) by Zio Ziegler (Courtesy of zioziegler.com)

Zio Ziegler's tribal-graphic murals, rendered mostly in black and white, are instantly recognizable throughout the Bay Area, with a strong concentration in SoMa—his work even frames the doorway of Ian Ross Gallery. The Mill Valley native, 26, combines his formal learning (from RISD and Brown University) with an innate sense of the street—Ziegler got his start adorning trucker hats and Vans, which he sold to make money to buy parts for his bike. His technical skill is stunning, and his point of view original: Throughout his works, we see human figures, fluidly moving and entertwined; and most recently, against a colorful patchwork of patterns. This month, Ziegler joins a collaborative group exhibition at Athen B. Gallery in Oakland (Sept. 4 - Oct. 2).  //  zioziegler.com

JanSport commissioned Alynn-Mags to paint this three-story mural for a video project called "Live Outside." (Photo courtesy of Juxtapoz)

Having spent the past decade learning the tricks of her trade from the automotive industry as a professional auto painter, Amandalynn applies well honed techniques (pinstriping, kandy coating, gilding) to murals and sculptural conservation projects that include a repaint of Mark di Suvero's Sieve of Eratosthenes and a refinishing of Claes Oldenburg's Corridor Pin at the de Young. The SF-based artist got her start back in 2001 with the infamous West Coast graffiti crew The Seventh Letter. Today, she's inspired by female sensuality for projects that include Lady Candace on Market Street and several prominent collaborations with Lady Mags, under the handle Alynn-Mags, including the three-story piece commissioned by JanSport (above) on the side of the Holiday Inn in downtown SF.  //  amandalynn.biz

You wouldn't be remiss to think of Ian Ross as the art world darling of Silicon Valley: The SF muralist, painter and installation artist is said to have been discovered by Facebook's head chef while live-painting at a party. Since then, he has pumped up the walls at Google, AdRoll, and Zimride, just to name a few. But you don't need to be on big tech payroll to enjoy Ross' work—his organic, swirling compositions can be seen everywhere from the streets of the Mission District to SoMa's Rocha Art (which he cofounded with his wife, Daniele Rocha) to the Cosmopolitan Hotel in Las Vegas.  //  ianrossart.com

The wonderfully child-like imagination of Oakland-based artist Kristin Farr has been opened wide for anyone to see as they pass her Magic Diamond mural on Market Street (above). The kaleidoscope of colorful geometric shapes epitomizes her work which, according to ARTBGC, "explores magic, rainbows, nostalgia, color psychology and positive vibes." In addition to doing murals, Farr plays with whimsical site installations (think rainbow-hued three-dimensional boxes places in craggy, earthy terrain), edits for Juxtapoz, and creates documentaries, including a video project for KQED Art School. She also splashes her neon optical graphics onto T-shirts, backpacks, and dance pants, all shoppable on her site.  //  kristinfarr.com

Now here is a Stanford-educated woman who actually graduated and is doing something truly disruptive. Based in Oakland by way of Denver, Lauren YS has a boundless curiosity for otherworldly things (everything from geishas to aliens—her inspiration comes from  "my travels, from novels and comic books and science, dreams and horror movies and mythology"— that manifests in her art in loud, provocative ways. Her extremely detailed work, which can be seen in Denver, Hawaii, Miami and San Francisco, can be called nothing if not original. In December 2014, she was invited to take part in the Heineken Mural Project at Art Basel Miami's Scope show.   //  laurenys.com