Before & After: A 117-year-old Dogpatch home gets a dramatic redo

"A home should tell the story of its owner," says interior designer Antonio Martins, the grateful second owner of this 1896 house in the Dogpatch.

Before he moved in, members of one family had lived in this house for nearly all of its 117 years, collectively adding to its character. Now Martins is adding his imprint through cherished finds from his travels, gifts from family, and playful mixes of the very old and the very new.

"This neighborhood was full of Irish and Italian immigrants who worked the nearby shipyards and canning factory. The last resident, a man who lived alone, was born in this house," says Martins, a Brazilian who lived in Hong Kong before settling in California.

By the time he found it, the house was in disrepair, and nothing had been renovated in the last 70 to 80 years, he says. But the home's good bones were still there. Martins moved forward with his professional hat on to stretch his budget as far as he could to rehabilitate this old Victorian and start a new chapter.

A 17th-century Italian statue from his mom welcomes guests in the long entryway. Scott Adkins of ProFab Metal Designs made the floating metal shelf, as well as other metal shelves throughout the house.

Martins collected the three metal designs hanging on the wall, created by Yutaka Toyota, years ago. "Toyota was big in Brazil in the 1970s and is making a comeback today as people are wanting to revisit that era," Martins says. "I'm not interested in the trend; I simply love mixing different eras together." 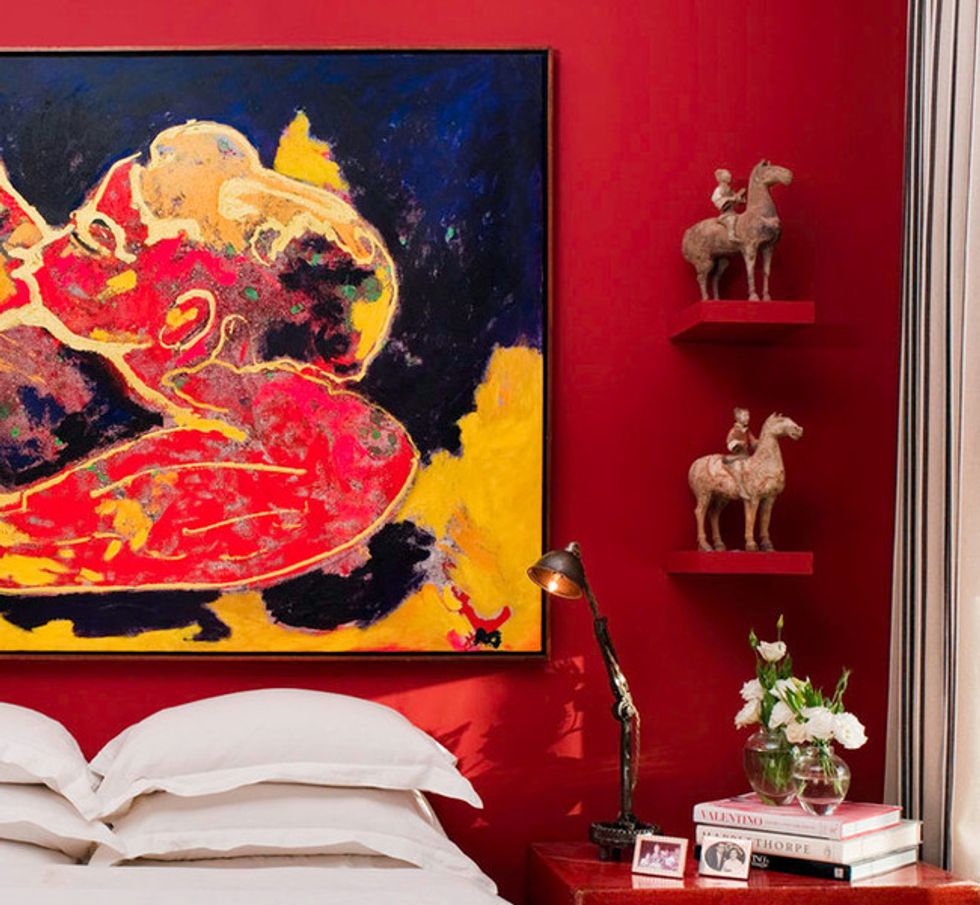 ProFab Metal Designs continues the house's metal shelving theme with an entire floor-to-ceiling system that surrounds the bedroom door. The shelving holds a host of cherished possessions, including a collection of Brazilian headdresses. 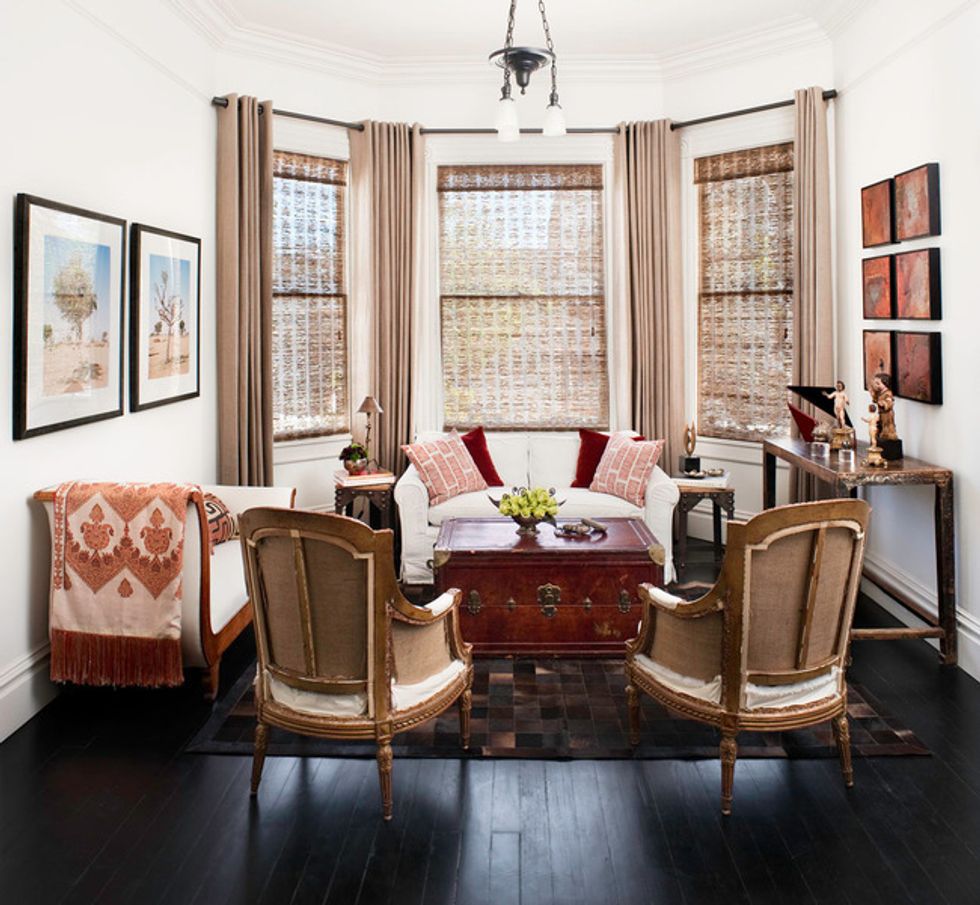 The recamier is from France and was bought by Martins at an auction, as was the Chinese 18th-century side table. "It's not about designing with what's fashionable," says Martins. "This room as well as the entire home is about what's me — where I've been, who I am."

The living room is "my life's story," Martins says. The small white sofa in front of the bay window was a pickup in Hong Kong, where it furnished the compact apartment he lived in for 10 years. Flanking the sofa are two industrial benches used as petite end tables. His grandmother's traveling trunk now serves as a handsome coffee table around which two reproduction French chairs sit.

Even the floors are a reincarnation of their former selves thanks to Martins' new take on them. The original floors throughout the house were salvaged, refinished and stained ebony with a matte finish. Topping the Chinese 18th-century table is a two-toned metal piece by another Brazilian artist popular in the 1970s, Emanuel Araujo, along with Jesus statues that have been in Martins' family "forever," he says. 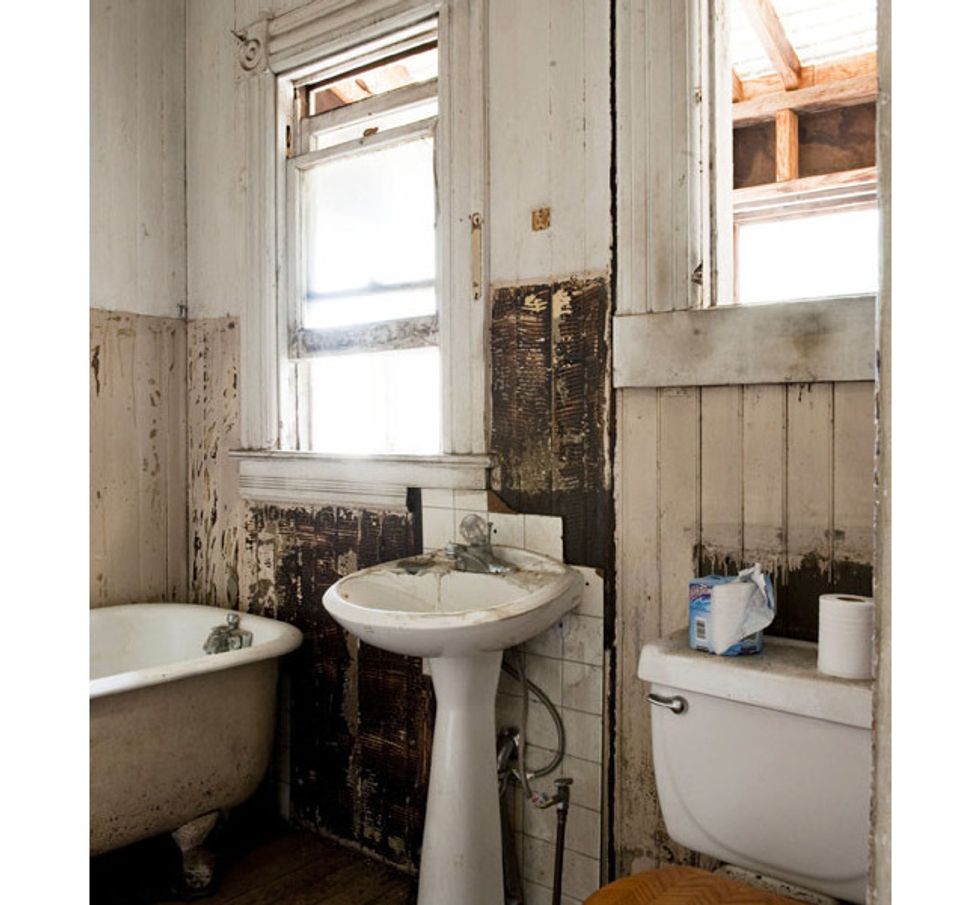 BEFORE: The original bathroom was typical of a Victorian from this era: tight and slightly awkward, but Martins embraced its quirks. 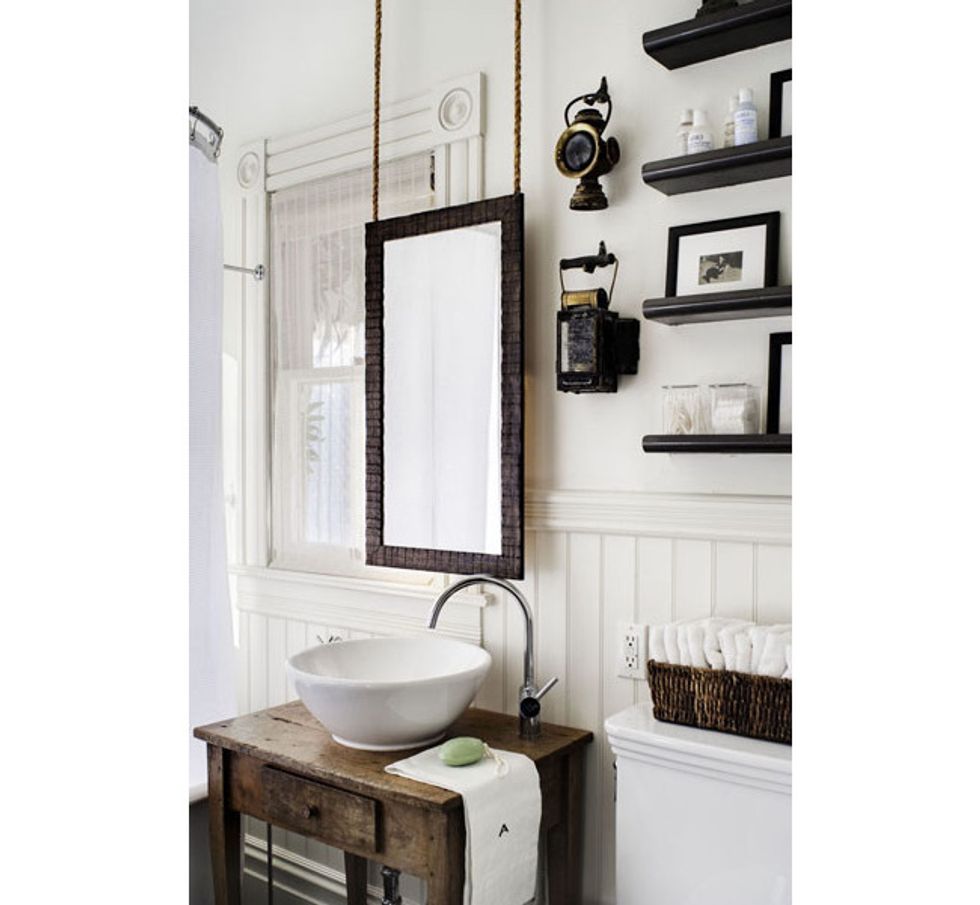 AFTER: The original pedestal sink was replaced with a Brazilian table, to which Martins added a Steinberg faucet he found on eBay and a Toto basin. Though he was successful at salvaging the room's original bathtub and window frames, the wainscoting was in poor shape. He tore it out and replaced it with a reproduction that would have fooled even the previous residents.

The original bathroom was typical of a Victorian from this era: tight and slightly awkward, but Martins embraced its quirks. "I kept the placement of everything as it was, including the window over the sink," he says. "It forced me to be creative with how to hang the mirror." His solution was to hang this custom mirror from the ceiling with ropes from The Home Depot. More floating metal shelves create storage. 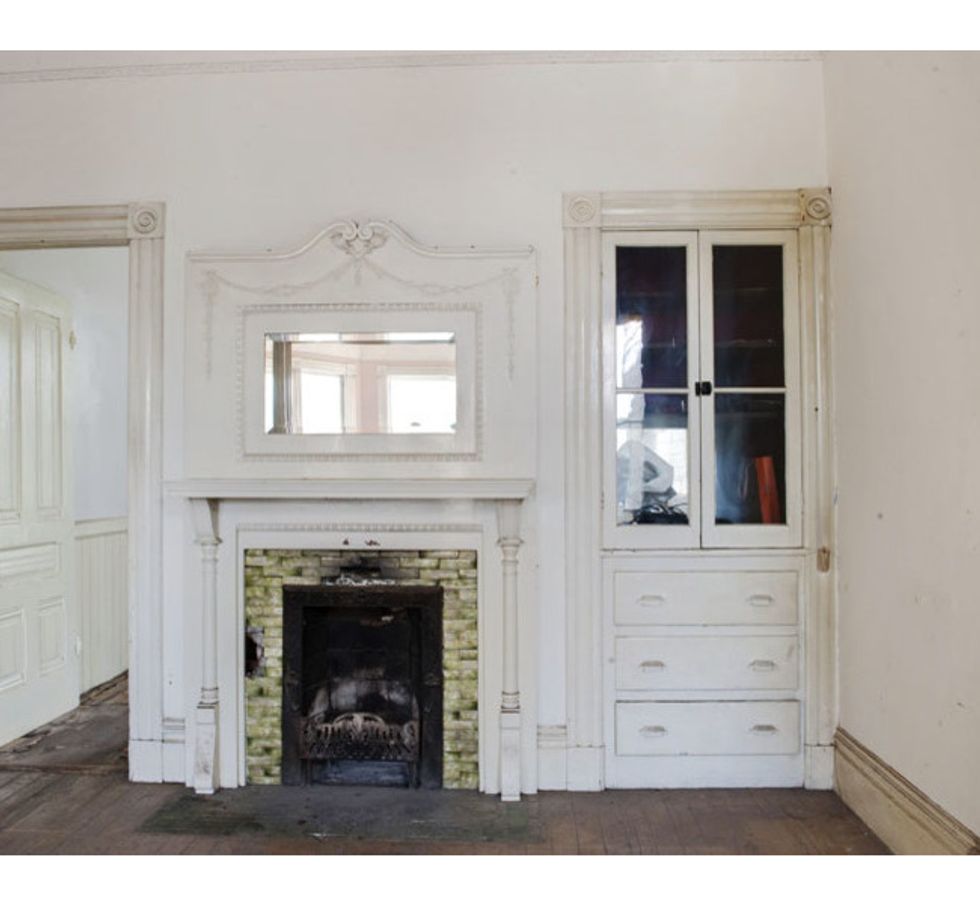 BEFORE: The parlor as Martins found it upon moving in. 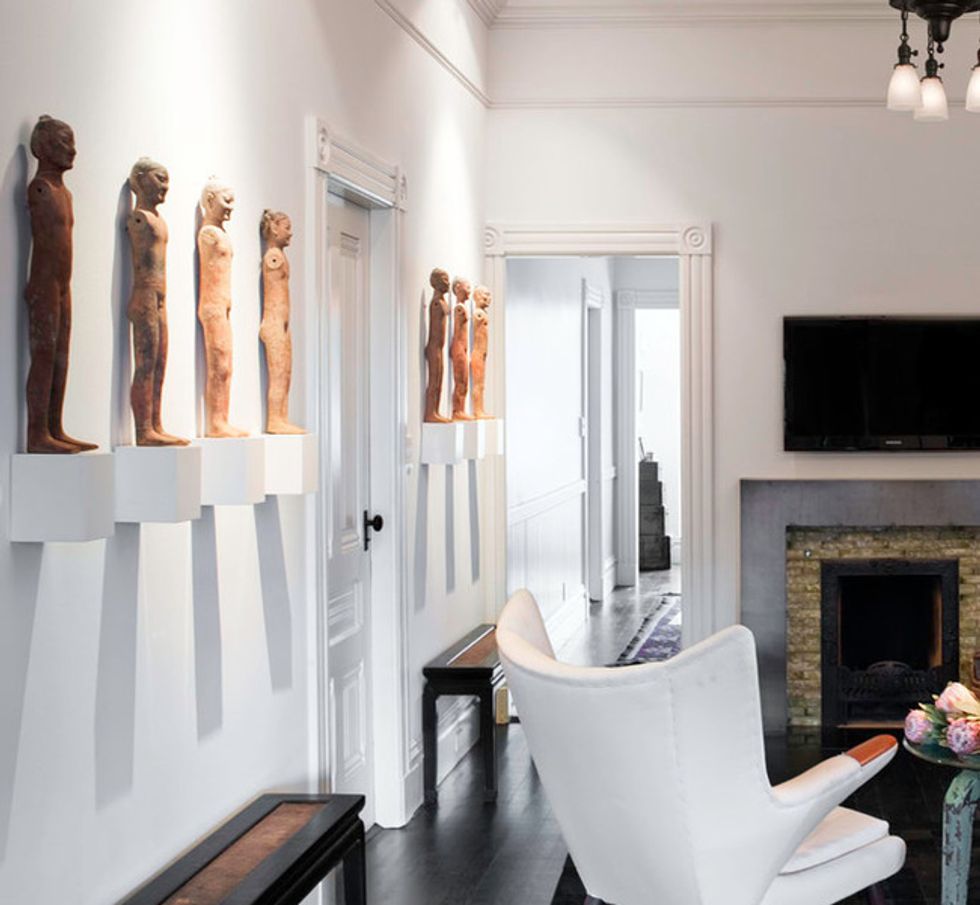 AFTER: Martins gave the original fireplace a metal surround for a contemporary look that plays with time, and added two midcentury Papa Bear chairs he found at Los Angeles Modern Auctions.

In keeping with his passion for time travel, Martins uses this room to display his 2,000-year-old Chinese stick men from the Han Dynasty. "They used to have wooden arms and clothes, but all that's left is the pottery bodies," he says. "I was considering having custom shelves made for each one, but when I found these blocks on West Elm for something like $20, I couldn't justify spending the amount that custom would have required."

Martins turned the pantry into a media room. He found the industrial table base when he was living in Chicago and topped it with glass.

To ensure that the stick men don't fall, especially in earthquake-prone San Francisco, each is carefully strung to the ceiling with invisible wire. The black benches below them are from the Ming Dynasty. 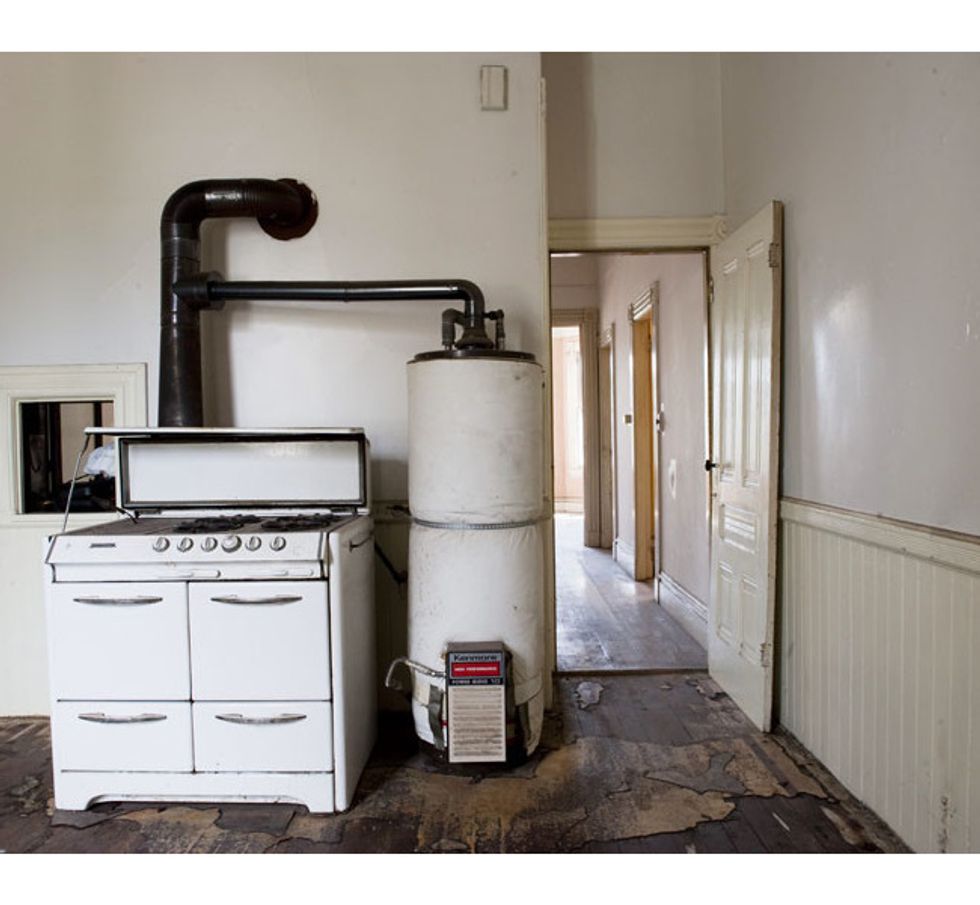 BEFORE: The kitchen was home to a 1948 O'Keefe and Merit oven. 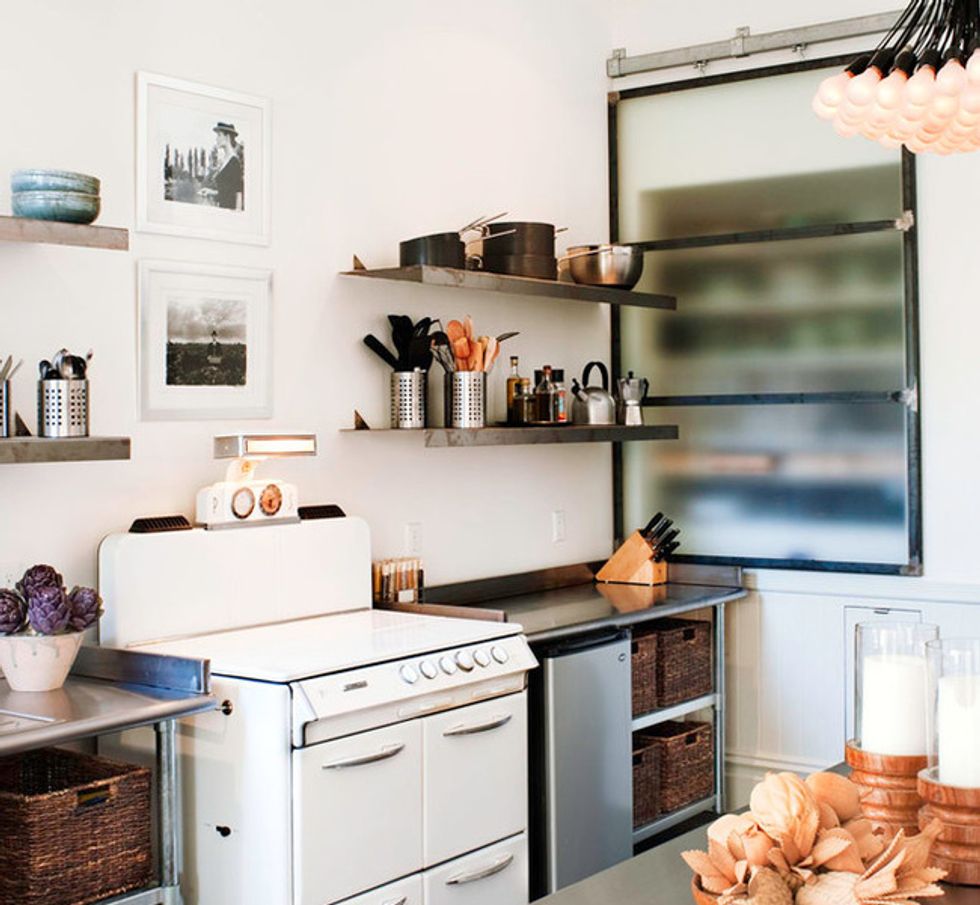 AFTER: Martins found himself falling in love with the classic appliance and went on a treasure hunt to find replacement parts. "I ended up finding an exact copy on Craigslist," he says. "I bought it and turned two partially working ovens into one perfectly working one. I love its simple aesthetic."

The rest of the kitchen follows that same aesthetic, thanks to Martins' use of restaurant kitchen tables as counters and an island. Baskets from Cost Plus World Market act as drawer space, while a minifridge provides all the cold storage he needs. "The kitchen is a wonderful, sizable space," he says with a laugh, "but I don't cook in it. I'm single; I eat yogurt and drink Diet Coke."

When he does entertain, a tall pantry dedicated to china serves his needs. It's hidden behind a single Plexiglas panel attached with barn door hardware from The Home Depot. Floating metal shelves complete the kitchen storage.

The walls of the master bedroom took their cue from the Chinese leather trunks Martins uses as bedside tables. Benjamin Moore made the custom red paint for him. To contrast the room's deep jewel tones, Martins had a white bedspread custom made with linen imported from Portugal. "Everyone has a fetish," he chuckles. "Mine is linen."

The guest bedroom has twin beds from Ikea covered with matching custom wool blankets. It shows off more of Martins' extensive art collection, including works by Alexander Calder.

Another of the guest bedroom walls features a fabric collage by artist Bahia. Atop the Italian chest of drawers sits a 10th-century stone Khmer sculpture paired with candlesticks given to Martins by his mother. "That was her first big purchase after she started as a nurse," he says. 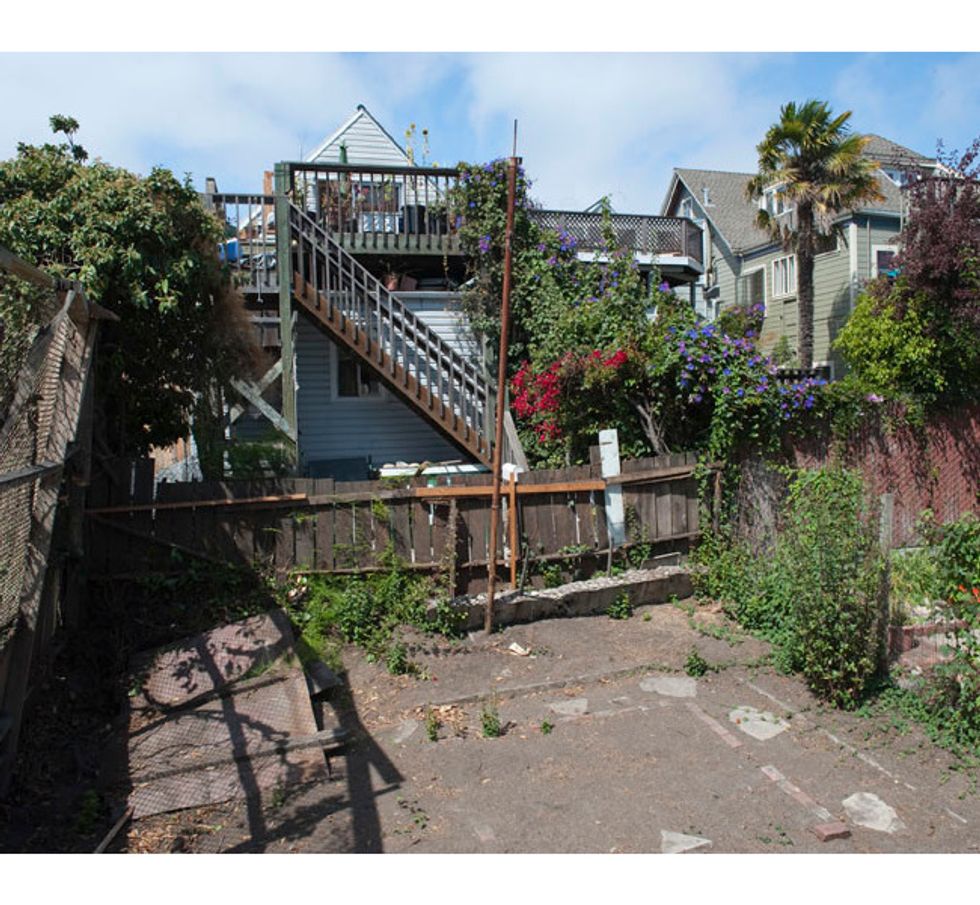 BEFORE: His efforts uncovered cobblestones and curbs that had been part of nearby streets. According to the previous owner's niece, it was common for neighbors to salvage what the city workers had discarded. It's just another chapter in this house's story. Martins used what he unearthed as stepping-stones and benches to create a simple garden of natural grasses, lawn and succulents. 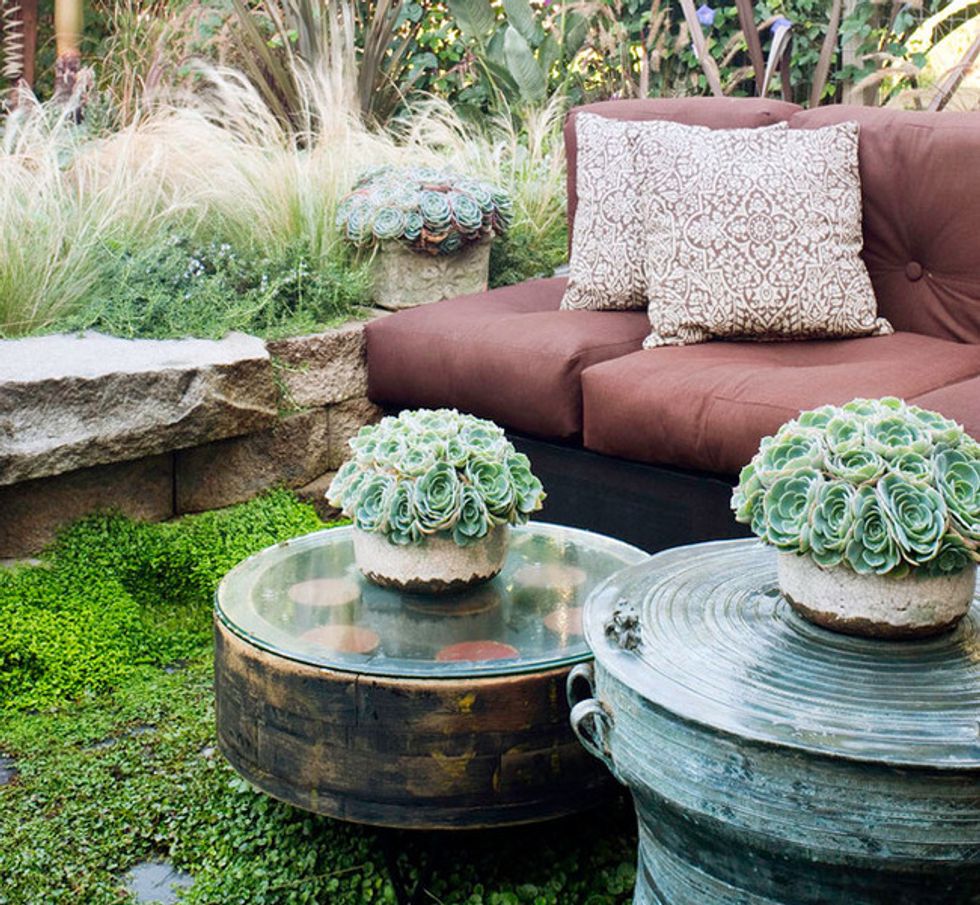 AFTER: To enjoy it all, Martins built lounge seating with an L-shaped base covered with floor cushions. A copper Burmese rain drum and a wooden table sit out in the mild weather year-round. Just like Martins, these objects are here to share their story in whatever way comes naturally.

The garden was a wasteland before Martins got his hands on it. And it really was Martins' hands that got dirty, to ensure that he didn't go over budget. Not that he minded the work. His appreciation for gardening began as a child, and he was happy to have a yard of his own to tend after living in a Hong Kong high-rise for so many years.

// This story was written by Tiffany Carboni and originally published on Houzz.