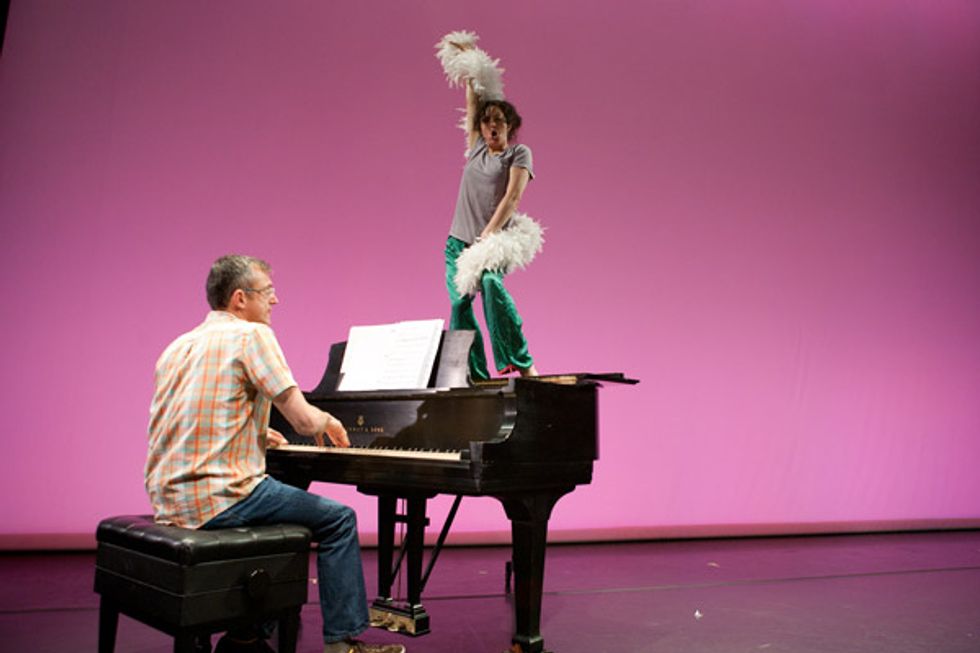 We’re all too familiar with the narrative infrastructure of ODC Theater’s latest musical, OMFG: Lonely man meets lonely woman. They flirt. They exaggerate their case for why they’d make ideal companions. True identities are revealed. Love is in the balance.

Once upon a time these types of encounters were the marked territory of contrived rom-com cinema, but the veils and deceptions of the Internet have made everyone with a laptop a potential author of such yarns. All the virtual world is a stage (too), the perfect place to ignore what we see in the mirror. So people bend the truth and hide insecurities as best they can. Until they can’t anymore.

With that idea as its crux, OMFG: The Internet Dating Musical is a light-hearted study of this bravado-free new world, performed with measured heart and a knowing sense of humor. Its two lead characters — Brandon (Jackson Davis) and Heather (Cindy Goldfield) — are well aware of the limitations and less-than-real nature of their encounter when they begin their chat pirouette. Their discourse reveals a script that seems to warmly embrace the e-romance process while poking fun at its failings.

ODC Theater Artist-in-Residence Christopher Winslow’s score spans genres deftly, culling elements of rock, salsa, reggae, sea shanties, R&B and more into a predominately jazzy/cabaret motif. Taken together, it plays like the soundtrack a Woody Allen movie (hinted at when Brandon names “Annie Hall” as his favorite film), as do the script and lyrics from the pen of Gavin Geoffrey Dillard. The opening number brings us inside such an Allen-esque neurotic subconscious, with the lyrics “don’t let him/her be gay” set to a stop-and-go ditty from the standing bass (James Schulz)/drums (Erika Johnson)/piano three piece. Other winners included “Virtually Yours,” an alternately jazzy/waltzy skip in the park, and the “Eat Shit and Die” hate-duet, after the characters realize they’ve been duped.

Davis and Goldfield acquit themselves superbly, managing the tall order of bringing animation and charisma to the sedentary act of chat-flirting on a laptop. Davis’ Brandon is an endearing mix of overgrown art-geek and naiveté, while Goldfield’s Heather were her NPR/yoga persona proudly, yearning for a compatible companion the way only a single 40something with fading confidence could — cynically (realized in song saliently with the number “The Gravity-is-Getting-Me-Down Blues,” which unmasked Goldfield’s inner diva).

The musical is at its finest when the characters get real with each other and face their own realities, sans sentimentality. When it appears as if their relationship is doomed, Heather confides, “I just wanna get laid,” which is closer to the truth. The whole truth? “I just want someone to grow old with… who remembers how hot I used to be.” Although we’re only witnessing them on a first e-date, it feels like the story could have easily spanned months, as each character experiences the many stages of a romantic relationship: from lust and puppy love to frustration and heart-break. At a certain age, shortcuts can be taken in the courting process.

A few odd musical interludes felt like an annoying pop-up ads, including a number about coffee at the beginning of the performance that did little to further the plot or illustrate our characters’ personalities or even entertain, rather negating the momentum established in the first scene. The climactic song at the finale also fell flat, its lyrics confused by the backing ensemble that sorely missed the amplification of microphones. It was an unfortunate time to lack for clarity.

But we’d still check the second-date box. Nobody’s perfect, no matter what their avatar might suggest.