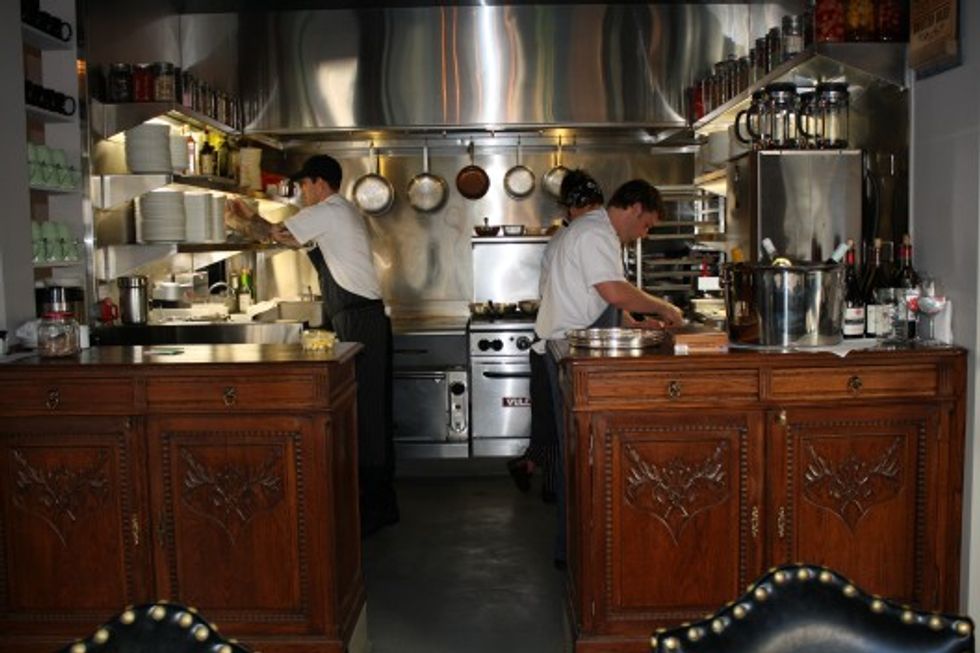 It is a rare thing that I dine at a new restaurant with absolutely no preconceptions about it. Between Eater and Inside Scoop covering the smallest details of every restaurant opening and my own personal connections to the restaurant world in SF, I've almost always tracked the chef or restaurant owner's career to some extent.

So, when I decided to drop in impromptu to Sons & Daughters, I felt a little thrill. Here was a restaurant I knew little about, barring a small mention on Eater. The Nob Hill restaurant opened quietly in June with no publicist. There are no big names attached. The small space (designed by one of the chef's mother, I later found out) has a striking, small open kitchen flanked with beautiful carved wood cabinetry situated dead-center in the room. The ceilings are a deep plum. There are chandeliers and a fireplace. Combined with the neighborhood, it makes for a refreshing take on old-world chic.

The menu offers a four-course prix-fixe for $49, something that you should do because the portions are fine-dining delicate (and because $49 is a steal). The food is classic in technique with a few unusual twists: We had a beautifully prepared, spritely herb salad over vaguely sweet curds followed by paper-thin lobster carpaccio and a nicely-done foie torchon. Squab with pea coulis came next—the breast cooked rare and the leg confited with its claw foot still attached, as if in the throes of death. (Always fun to watch your dining companions squirm.) The food as a whole was deftly prepared and the service was also very good. But when, in a moment of enthusiasm, I asked our server to tell me more about the chefs, he had no answer!

It took getting back to my desk to do some research. Here's the scoop: The two owners and co-chefs are 20-somethings Teague Moriarty and Matthew McNamara. Before launching Sons & Daughters, Moriarty and McNamara were both working as personal chefs here in SF, but beyond that their background is eclectic: McNamara worked as a sous chef at RestaurantSix89 in Aspen before staging at Michelin starred restaurants all over the world, including Guy Savoy and Jean Georges. Moriarty meanwhile worked as a sous chef at Gregoire in Berkeley.

From what I gather, they're just some guys that got it together to open a restaurant and from my experience that night, all signs point to very good—a feat in this competitive city. My advice? Take advantage of all the big restaurant openings right now (Prospect, Wayfare Tavern, Benu) because while the mobs are lining up for reservations at the biggies, you can still slip in to Sons & Daughters before they get reviewed. I fear by then, this tiny restaurant will have its own waitlist to contend with.