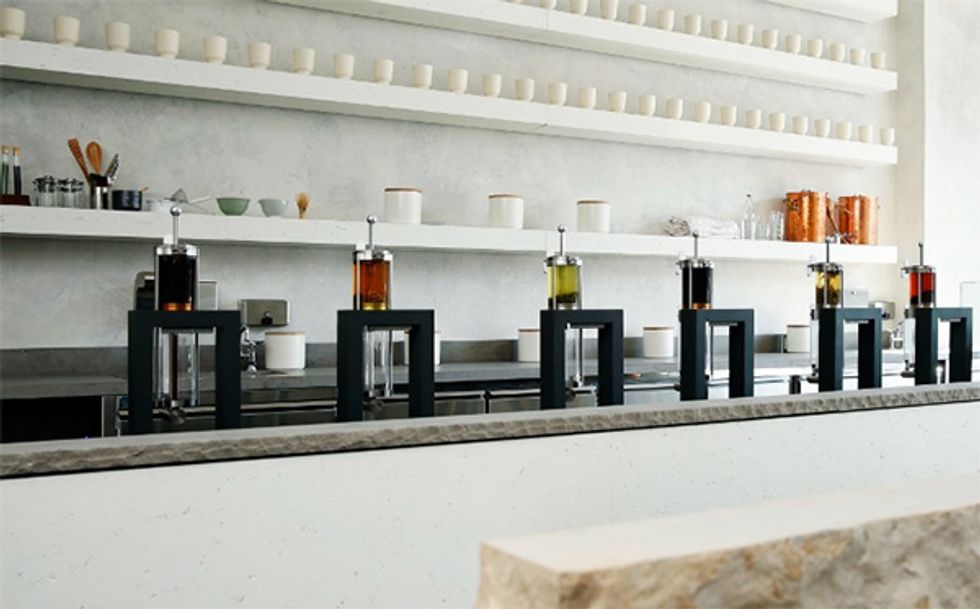 As summer is almost officially upon us, we have a few more new things taking shape in the immediate food future, and a few more coming down the pike—and the Mission, again, is blowing up.

First off, Thursday marked the opening of the new Mission branch of Samovar (411 Valencia Street). It's being billed a temple for "third wave" tea, and the "Apple store of tea shops," and with the new location is also going to come the launch of a new Samovar retail line of loose-leaf teas. The design of the new space was by Arcanum Architecture, and they'll be serving freshly made tea along with fresh-baked scones daily (but not the full food menu available at the other two locations).

The husband-and-wife team of Hiro Sone and Lissa Doumani, who made a name for themselves with Terra in St. Helena and Ame at the St. Regis, are going to be bringing a modern California bistro to the space formerly occupied by Wo Hing General Store at 584 Valencia Street. It's going to be called Urchin, they're aiming for a late summer opening, and Doumani says the inspiration for the name comes from the nostalgic idea of neighborhood kids without a care, "that feeling of adventure, of not having boundaries, being urchins again. Allowed to roam freely and experience everything." [Inside Scoop]

ABV looks to be close to opening at 3174 16th Street, in the former Tokyo a Go Go space, just a few doors down from the brand new Chino. Their official opening date is still TBA.

Also in the Mission, The Tradesman (753 Alabama Street) is closing in on a July opening. It's going to be a bar with food, with a menu from Maverick/Hog & Rocks owner Scott Youkilis and chef Bryan Baker. [Inside Scoop]

Good news for Outerlands fans: They just relaunched dinner service on Tuesday night. The menu's not yet available online, and it's still first-come, first-serve, with reservations launching soon. [Tablehopper]

Over in the East Bay, adding to the already booming beer scene, Perdition Smokehouse (2050 University Avenue) opens tonight. It's a collaboration between Chuck Stilphen of The Trappist, and his chef at his SF brewpub, Mikkeller, chef Michael O’Brien. The menu features dry-rubbed barbecue including beef brisket, pork shoulder, hot links, ribs and turkey breast, with counter service and several cutting stations, as well as sides like mac and cheese, collard greens, and Texas black-eyed peas. Beer-wise, there will be 43 taps of rotating American session beers in pints and pitchers.