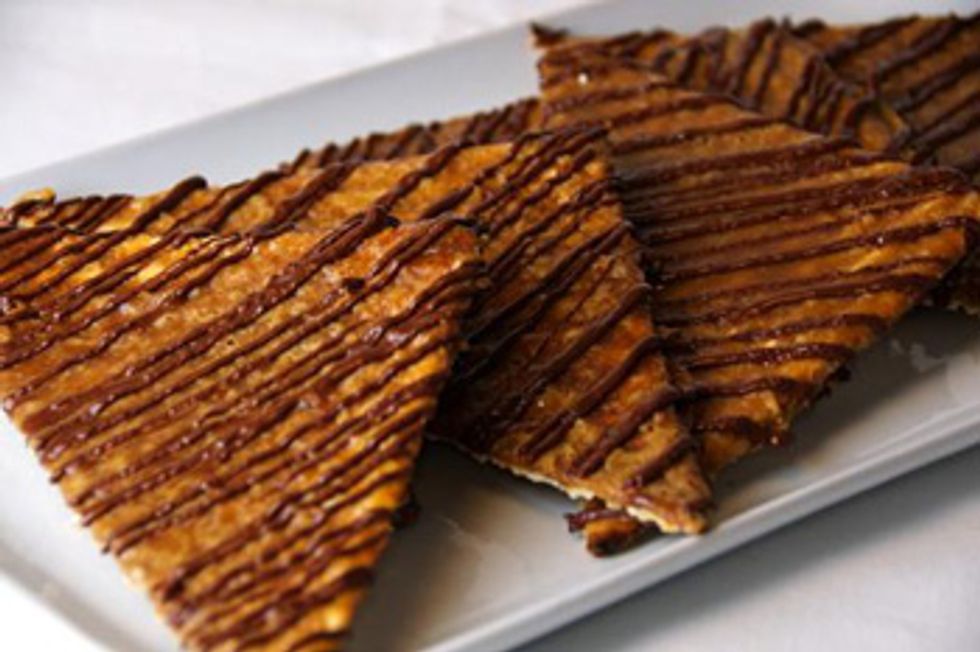 From Mini Latkes to Kosher Gin, Do It Up For Passover in San Francisco

In San Francisco, there are ways to celebrate Passover with nary a moment of matzo dry-mouth nor a whiff of stinky gefilte fish. As delis like new pop-up Wise Sons create carefully homemade renditions of traditional fare, everyone from Marina bakery SusieCakes to FiDi Italian restaurant Perbacco is getting in on the holiday action. Here's our list of San Francisco Passover options that'll have gentiles across the land thinking about a conversion—or at the very least, a reservation.

New Jewish pop-up deli Wise Sons is doing two traditional Passover seder dinners at Coffee Bar. The first one on the 18th is already sold out, but there are still spots at the table on the 19th. The six-course menu includes homemade matzo, made-from-scratch gefilte fish, matzo ball soup, brisket and a dessert assortment for $45. Wine pairings are an additional $20. Here's the info for reservations.

Fixed price menu commitment-phobes will enjoy an extra Passover kick on some a la carte menus around town. Every night of the holiday, Craig Stoll will offer his take on matzo ball soup at Delfina along with modern takes on brisket, risi bisi and such. Firefly eschews its regular prix fixe option to bring extra holiday-themed items to the menu, like roasted vegetable matzo kugel.

For those planning to get Kosher at home for the holidays, there are several take-out options nearby. After twelve years in business, Robby Morgenstein's got Passover down pat at his Miller's East Coast Deli: steamed brisket with gravy, sweet-and-sour cabbage rolls, mini latkes, gefilte fish, matzo ball soup, whitefish spread, a seder plate for $15 and much, much more. The take-out options at Wise Sons and Bi-Rite Market are worth a kvitch or two as well.

In Passover-appropriate bakery news, SusieCakes has added "Matzo Crunch" to its roster of cupcakes, puddings, whoopie pies and other delights. Owner Susan Sarich bakes the matzo with brown sugar and drizzles it with bittersweet chocolate and caramel. She also offers coconut macaroons and flourless chocolate cake until April 25th.  And all locations of Arizmendi Bakery offer wheat-free chocolate macaroons throughout the holiday.

Since booze and holidays go hand in hand, we'll also point you to No. 209's earth-shattering Kosher for Passover gin and The Sipping Seder, an erudite guide to cocktails inspired by the items on the traditional seder plate. A "charoset," served up with honey vodka, sweet vermouth and cinnamon? Le'chaim to that!