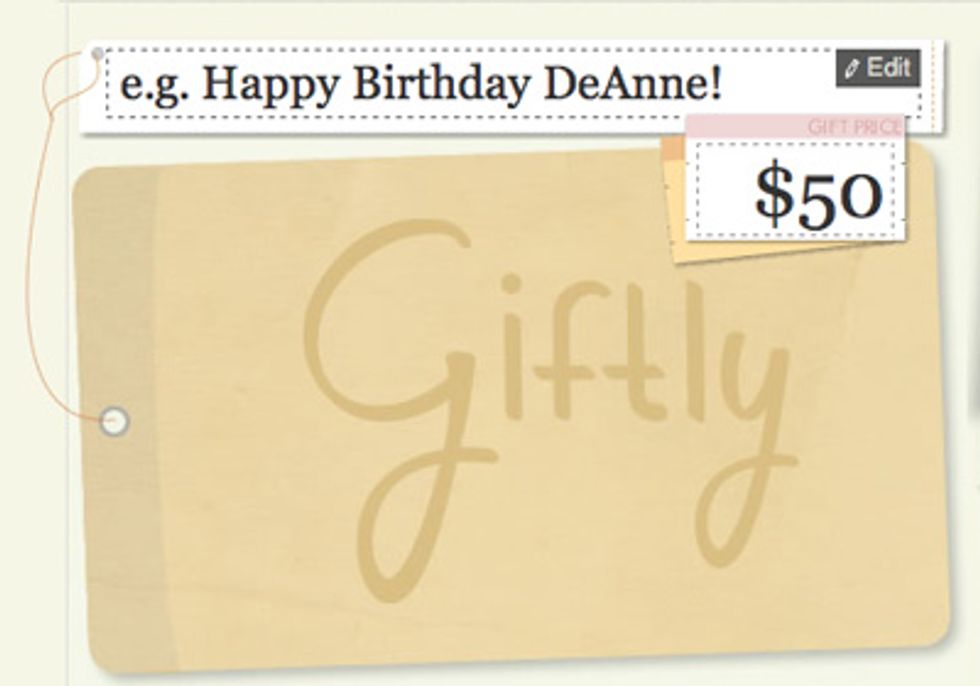 This city’s entrepreneurs are systematically disrupting virtually every established industry in the country, and next up looks to be the gift card industry, which currently produces some ten billion pieces of non-biodegradable plastic a year.

Meet Giftly, a SoMa-based startup just a few weeks into its public beta. Giftly provides a way to personalize the gifting experience, leveraging social networks and location-based data so you can treat your family members and friends to places near them, like restaurants, shops and clubs.

Based on Yelp’s open API, Giftly allows you to choose among thousands of places all over the country, with all of those ratings and reviews at your fingertips. An email goes out to the recipient with instructions how to use the customized gift certificate, which is as easy as showing up and “paying” with your credit card — Giftly then credits the gift to your credit card bill.

“Think of Giftly as a smarter, more sophisticated version of the traditional gift card,” says CEO and founder Tim Bentley. “You can personalize it to, say, three coffee shops here in San Francisco, and the person you’re gifting can use their smartphone to access the gift, go into any of those shops, without having any new plastic card involved at all.”

The young company, with a staff of nine and $2 million in funding, has not yet been able to get the url giftly.com, so it can be found at begiftly.com. Bentley says this has had an unanticipated positive affect in the development of its product. “Being Giftfly is a state of mind, a way of interacting with the people you care about; there are elements of generosity, fun, play, and authentic connection with the people you know and love.”

Part of his motivation for starting the company was frustration at not being able to treat his parents back east in out to their favorite restaurant for dinner. They live in Montpelier, Vermont, which with its population of under 8,000, is the smallest state capital city in the land, and the restaurant they fancy doesn’t even have a website, let alone a gift card program.

Giftly theoretically brings any establishment of any size into play and as such represents a potential boon to local merchants. “Being from a small town myself, I love local businesses. Montpelier is the kind of place where we blocked McDonald’s from opening up downtown. But it works equally well in big cities with chains like Starbucks, of course.”

Where the traditional gift card originates with a merchant, Giftly “puts the connection between two people at the forefront,” says Nish Nadaraja, former Brand Director at Yelp, who serves as Marketing Director at Giftly.

The market opportunity here quite woud seem to be huge, since roughly half of all Americans already are using the traditional gift cards, vanilla cards, and the like.

The new service works over the web and email but is optimized for mobile devices and social networks like Facebook. In early user testing, the Giftly team adopted a limit of three places for any one gift (although this constraint can be over-ridden at the user’s request).

“We have only one doctrine,” says Bentley, “and that is to listen to the users. The product will evolve as we find out how people want to use it. The products that feel right are the ones that will be successful now. All previous existing gift cards put the merchant at the center of the experience, but we have completely refocused on the gifter and the recipient and their relationship. We also make it easy to send thank you notes, as well as other elements of interactivity.”

Bentley says the company will also work with merchants "down the road.”

Since quietly inviting users to try the service for Father’s Day in June, Giftly has grown by word of mouth to the point where it currently sees “thousands” of users a day, giving gifts that number in the “hundreds most days.”  So far, people are more likely to give gifts at night or on weekends, according to early user data.

The team envisions partnerships with a wide variety of industries in the future, including the travel industry, hotels, etc., as well as business users. Early customers also have inquired about being able to give gifts like a house-cleaning or other services that many would consider too much of a luxury to commission for themselves.

In that context, among companies we’ve profiled here at 7x7, it’s easy to imagine outfits like Munchery, Zaarly, Peggsit or Uber being natural future Giftly partners as well.

Bentley and Nadaraja specifically invited 7x7 readers to join the ranks of early beta testers and help shape what this extremely early-stage venture turns into over the weeks and months to come. And in the "Gift Ideas" section of the site, you'll find a few 7x7-curated gift ideas, from cookie picks to Union Square lunches.  “C’mon and beGiftly,” says Bentley, perhaps coining a new verb in the process.