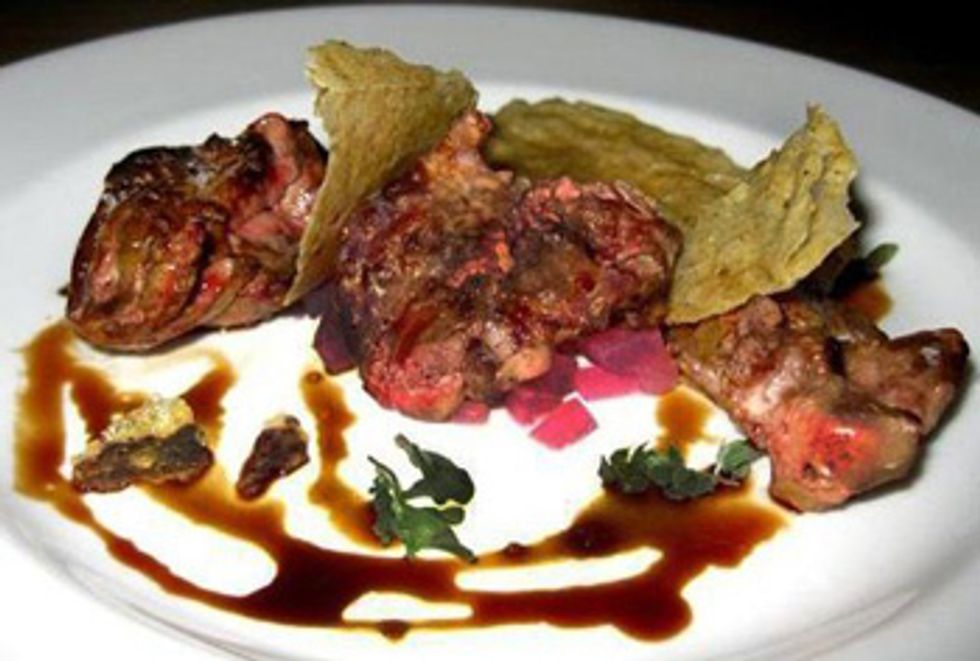 After a recent trip to Bar Tartine to try Nick Balla's new menu, I've got liver on my mind. I blame his his duck leg cabbage roll inspired by a Northern Hungarian sauerkraut soup called kapusznica that his father used to make. The Eastern Europe-inspired menu addition buries strips of sous vide-cooked Sonoma Liberty duck liver in a pile of black trumpet mushrooms, dried cherries and homemade sauerkraut, all wrapped up in a tender cabbage leaf. It's a mess on the plate, but the sweet, sour and spicy flavors bewitch, bite after bite.

But while restaurants like Frances, SPQR, Barbacco and Wexler's whip liver into creamy mousses, marmelatas and pates, a whole liver lobe is a tougher sell.

"You either love it or you hate it," says Larry See, executive chef and owner at North Beach's 18-year-old The House restaurant, whose fried chicken liver salad is popular enough that it's been on his menu for several years now. A riff on a traditional French-style grilled chicken liver salad, See's places a cluster of dressed greens atop lightly marinated fresh chicken livers, wok-fried to a crispiness that's still creamy inside.

In the Mission, Flour + Water chef-owner Tom McNaughton recently remodeled his kitchen so he can now make up to eight pastas nightly. Whole wheat strozzapreti with hen, its liver, bresaola and broccoli di ciccio is his first new creation. McNaughton gets his chicken livers from Hoffman Farms. He likes using the liver because it rounds out and enriches the pasta dish, giving it a "creamy, more intense, chicken offal flavor."

At Commonwealth, chef Jason Fox keeps putting his robata-grilled liver snack back on the menu. He soaks the liver in milk overnight, lightly chars it to medium-rare and serves it with pickled red onion, saba, marjoram and homemade rice crackers. Fox likes using liver because it's relatively easy to prepare and it's in season all year. But is it a crowd pleaser? Fox says that its popularity is "medium." "It evokes memories of childhood for a lot of people," he says. "That can be a good thing, or a bad thing." I choose the former.