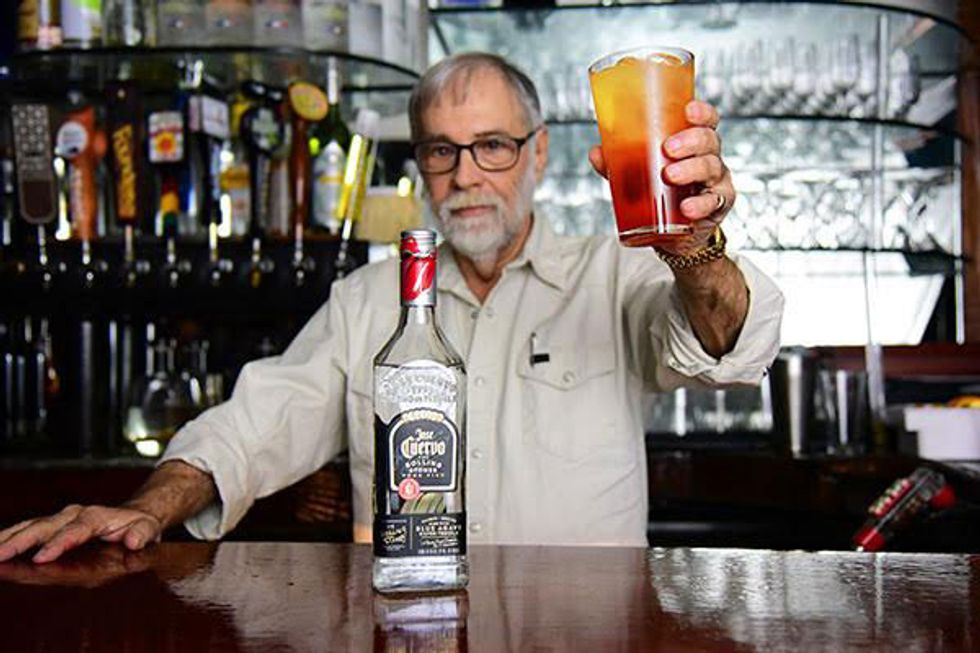 Bobby Lazoff isn’t shy about sharing stories. He’s just as likely to drop a casual reference to his inclusion in Hunter S. Thompson’s Hell’s Angels: The Strange and Terrible Saga of the Outlaw Motorcycle Gangs (“I'm not in it by name, but I'm the guy with the BMW”) as he is to rattle off the many musicians that have crossed his path over almost seven decades. (He counts The Grateful Dead among his personal friends, and has a tattoo on his right arm that was inked at Janis Joplin’s house).

But in bartending circles, Lazoff is best known for inventing the tequila sunrise, a combination of tequila, orange juice, and grenadine that he shook up for The Rolling Stones at Sausalito’s The Trident in the early seventies. The Stones subsequently took the drink across the country on their “cocaine and tequila sunrise tour,” the cocktail received a musical ode in The Eagles’ “Just Another Tequila Sunrise,” and the rest—as they say—is history.

Back in the Bay Area for the first time since The Trident reopened in Sausalito, Lazoff shares the history of the drink, its rise to fame, and the bartending trend he could do without.

7x7: How did the tequila sunrise come about?

BL: The Stones were really hard to handle, so Bill [Graham] made arrangements to bring them into The Trident for a secure, intimate party. Keith Richards walked up to the bar and asked for a margarita, and I said, “Hey, have you ever tried this drink?” And he went “Alcohol? I’ll try it.” So I poured him the tequila sunrise, and you could sort of see the light go on in his head. Bingo. You don’t need a bartender to travel with you, just buy a bottle of Cuervo, a bottle of orange juice, and grenadine. So they picked it up and took it across the country, and called their tour the “cocaine and tequila sunrise tour.” Then, The Eagles came out with “Just Another Tequila Sunrise.” Tequila caught on, the sunrise caught on, and it was a big deal.

7x7: When did you realize it had become a phenomenon?

BL: About two years ago [laughs]. I told everyone that I invented the tequila sunrise, and they didn’t believe me. But National Geographic did a story on me, and when Keith Richard’s book came out, he included me. This was 41 years later, after I had moved to Hawaii and ran a Trident-type bar with live music for years, and it was a total surprise. I wasn’t even a bartender anymore.

7x7: What was it like going back to The Trident for the first time since it reopened?

BL: It brought back lots of memories. I was a busboy, carpenter, bar back…I went through the whole regime. The place looks very much the same, but of course you go in and say, “That’s still there, did you change that?” But it passed inspection.

7x7: What’s one of your favorite memories from The Trident?

BL: A fight when I was behind the bar. It’s Sunday, the restaurant was full of people, and the Hells Angels took over and were intimidating all of the staff. There was this big table downstairs, and it was the defensive line for The Raiders under John Madden. One of the Hell’s Angels takes an ashtray and flings it at a waitress, and it went close to the football players and their families. They stood up, the Angels went at them, and then the Angels went flying through the air like in Marvel comics. It took about two minutes. The football players really beat the shit out of those guys. A couple of days later, Sonny Barger, leader of the Angels, walked in with a pile of hundreds, and he tipped the staff and made good with them. That was a memorable night, but there were an awful lot of them.

7x7: You have so many amazing stories. Any thoughts on writing a book?

BL: I’ve done quite a bit with my life. It’s always about being in the right place at the right time, and I won.

7x7: The tequila sunrise is a pretty straightforward drink. What do you think about the trend towards complicated cocktails with artisanal ingredients?

BL: This is my personal opinion: Candy ass drinks suck. San Francisco is too hard drinking of a town to have silly drinks. The whole idea of this tequila sunrise was to keep it simple. If someone wants a candy ass drink where you can’t taste the alcohol, don’t drink alcohol.

A: The best recipe—I don’t know if it’s around—is something called a smoky martini. It’s a martini, up. You know how bartenders use their spoon to put a float on? Instead of vermouth, you do a high quality martini, no vermouth, and you gently pour a millimeter of scotch over the spoon. It should really make the comeback. That smoky martini beats any martini made.