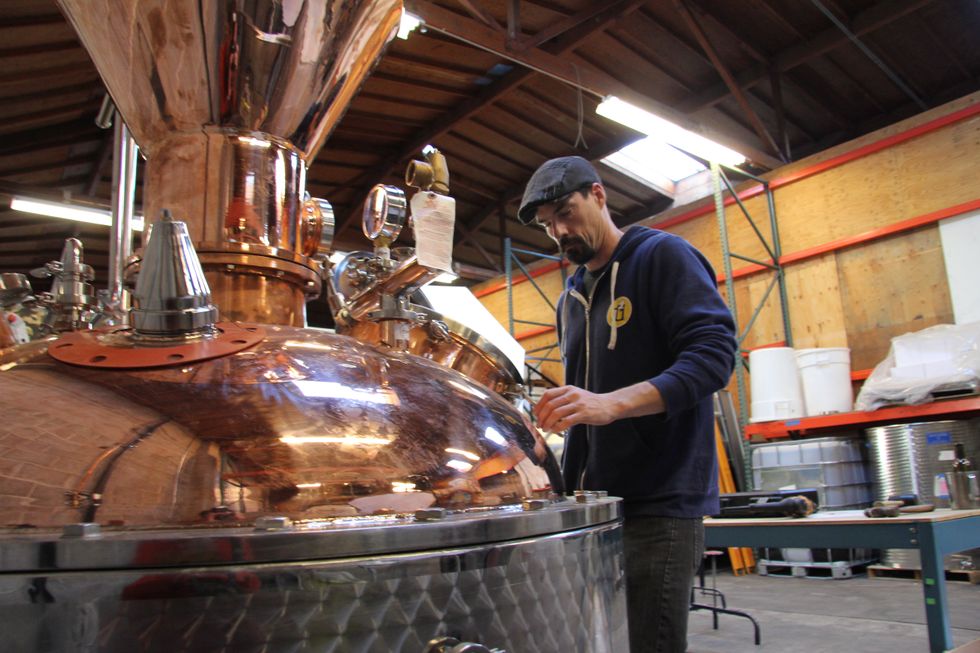 What happens when a wine-making techie leaves the echelons of Silicon Valley to make grape-based spirits using local ingredients in a collaborative environment? Better booze for all.

“It starts with friendship and community,” says Adam Nelson, co-owner of the new Oakland Spirits Company, located in uptown near 25th and Broadway. Nelson says community is the reason he first got into spirits—he and some friends started making their own wine, and by 2009, their Two Mile Wines had moved into a coworking space on 25th Street.

“I love all of the multidisciplinary stuff,” says Nelson, who has shared the space with a dozen other makers over the past six years. “I like when people are just making shit. It’s a much better atmosphere creatively.”

Housed just a few doors down, Nelson's Oakland Spirits Company is on a mission to make “drinks of distinction for everyday people.” Their first batch of spirits will include a dry gin, a lemongrass brandy, a sage-based gin, and Gin No. 5, which Nelson describes as “a Sunday gin”—aromatic with citrus notes and delicious with tonic. The initial release will include one of Nelson’s favorite collaborative inventions: a briny sea gin made with nori and coastal bay and sage.

“Sully Farms in Mendocino hand-forages all our nori,” says Nelson, pulling out a large plastic bag filled with thin crinkled strips of seaweed. “They care a lot about their product and about harvesting it in a sustainable way.”

Oakland Spirits Company's first release will include a dry gin, a lemongrass brandy, a sage-based gin, and Gin No. 5.

Nelson and his team have also partnered with Oaktown Spice Shop and Forage Kitchen, who are introducing them to new spices and locally foraged ingredients, resulting in distillations and infusions that are unique to the "city terroir" of Oakland.

In addition to producing its own line of spirits under the oversight of head distiller Tim Lynn, Oakland Spirits will also give select home-distillers the opportunity to experiment, collaborate, and create their own spirits.

“The plan is to have this be a community resource of sorts,” says Nelson, who developed the collaborative concept as a sort of distillery incubator. “I encourage people who are passionate to come in and do a project.”  //  489 25th St. (Oakland), oaklandspirits.com