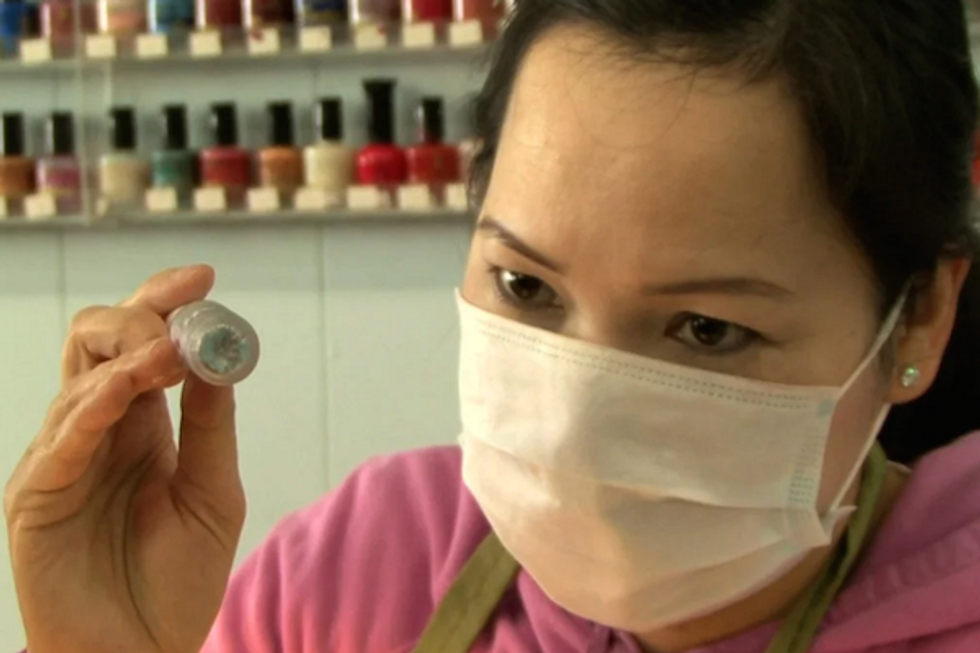 A new documentary tells the story of San Francisco nail salon owner Van Hoang, whose multiple miscarriages and asthma, due to prolonged exposure to toxic chemicals in nail care products, ultimately put her on a quest to bring safe cosmetics to all.

If you walk into New York Nail, on Mission Street near the corner of Cortland Avenue, at any time on any day of the week, you’re likely to find owner Van Hoang hard at work in her bustling salon, caring for a diverse group of women who come not just for the wild nail art, but also for the familial environment.

"We cook and eat here—the only thing we don't do is sleep here. This shop is a dear friend to us,” says Hoang, who immigrated from Saigon to San Francisco in 2000 and opened her salon a few years later. “Now I'm happy,” she says, “because I got the chance to live in America. I didn't think I would." As a young child, Hoang sold food and goods made by her family on the streets of Saigon. In 2001, after moving to the U.S., she became licensed to work in the nail industry.

But if only achieving the American dream were so simple. Hoang suffered her first miscarriage. And then another. And while it's difficult to pinpoint the exact cause of her miscarriages, the "toxic trio"—formaldehyde, toluene, and dibutyl phthalate; ­common components of plywood, embalmers, and household cleaners—are widely known to have links to reproductive damage and birth defects.

Most savvy style mavens now know to beware the toxic trio, which has long slipped into our polish bottles with little to no government oversight—no testing, no monitoring of health effects, no labeling that might indicate the chemicals hidden in our favorite lacquers.

Never mind the warnings from the scientific community ("Some of the chemicals in nail products have been linked to abnormal fetal development, miscarriages, and other harm to reproductive health,” says Sharima Rasanayagam, director of science at the Breast Cancer Fund).

Never mind the cautionary anecdotes of women like Hoang (who now carries only 3-free products at New York Nail, which has been recognized as a Healthy Nail Salon by SF Environment).

And never mind the increasing amount of bad press ("The prevalence of respiratory and skin ailments among nail salon workers is widely acknowledged," reports The New York Times.)

But things may be beginning to change.

In the Bay Area, supervisors Cindy Chavez (Santa Clara) and David Chiu (SF) are going on the record about the harmful effects of the toxic trio, which has been linked to “dangerous forms of cancer, birth defects, asthma, and all sorts of other diseases," Chiu points out. On the national field, Hoang—along with the California Healthy Nail Salon Collaborative and Women’s Voices for the Earth—is advocating for the Safe Cosmetics and Personal Care Products Act. Introduced in Congress in 2013, the act would establish safety standards and labeling requirements and ensure oversight by Health and Human Services. Testifying in D.C. on its behalf, Hoang asked, "Please pass legislation so that all cosmetic products, including nail care products, are safe before they are sold to the public, so we no longer have to work in fear."

Her story, which encapsulates the stories of so many cosmetics industry workers and the millions more women who rely on their services, has been documented in a new short film, Painted Nails, a collaboration between Bay Area filmmakers Dianne Griffin, Erica Jordan—who believes she is carrying on her grandmother’s 20th Century struggle to assure workers’ rights—and co-producer and translator Nhung Hoang Pham.

"In the beauty industry, there is no industry-agreed meaning for terms like organic or natural. Unlike the food industry, these terms are not regulated for cosmetics, which means companies can use these terms pretty freely," the filmmakers state on the film’s Facebook page.

Painted Nails made its debut at Cinequest last week, and is scheduled for screenings this weekend at Sebastopol Film Fest (Mar. 19, sebastopolfilmfestival.org) and CAAM Fest (Mar. 20, caamfest.com), with additional screenings at the New Parkway Theater in Oakland (Mar. 20, thenewparkway.com).

Get Pretty at Our Favorite Healthy Nail Salons in San Francisco